The clashes between the Syrian government-affiliated forces and Kurdish security forces ended in Syria's northeast city of Qamishli after reaching an agreement between the two parties under Russian auspices. 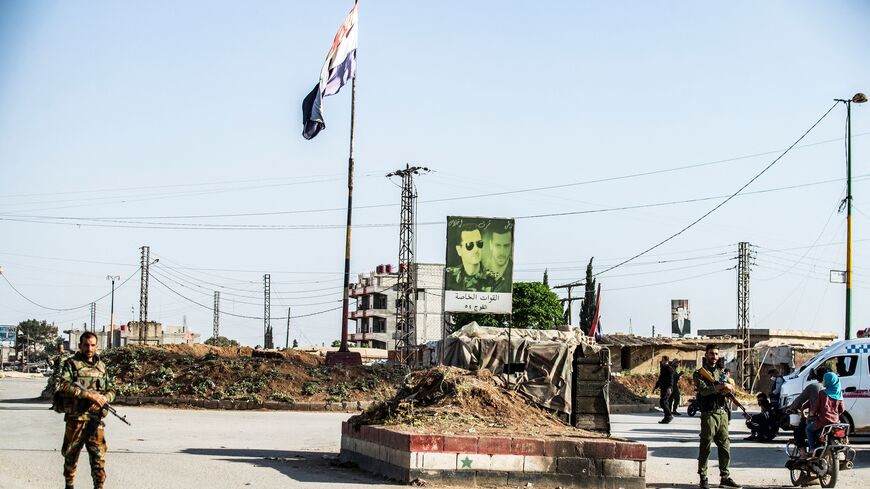 Members of the Syrian Kurdish internal security services known as Asayish and Syrian government forces man a checkpoint in Tayy neighbourhood in the northeastern city of Qamishli, after the implementation of a Russian-brokered cease-fire agreement, Syria, April 27, 2021. - Delil Souleiman/AFP via Getty Images

Clashes broke out April 20 in neighborhoods of Qamishli, between the Asayish internal security forces affiliated with the Kurdish-led Autonomous Administration of North and East Syria and the National Defense Forces, which includes fighters loyal to the Syrian government and is receiving support from Iranian militias. The fighting began after Khaled al-Hajji, an Asayish security official, was killed in an attack by members of the National Defense Forces at a military checkpoint near al-Wahda roundabout, close to the Tayy neighborhood, in southern Qamishli. The Asayish responded and targeted several National Defense Forces checkpoints in the same neighborhood, and managed to kill three members and arrest others.

Several rounds of negotiations were held in Qamishli to end the clashes between the two sides, with the presence of representatives of the Syrian Democratic Forces (SDF) and the Asayish, along with Syrian and Russian officers. A temporary truce was agreed upon, starting April 23 at 7 p.m. until April 24 at 10 a.m.

On April 25, the Asayish announced that a permanent truce will be reached, guaranteed by the SDF and the Russian forces, and the people of Tayy neighborhood will return to their homes on the morning of April 26.

The clashes between the two sides had resulted in civilian casualties, including at least two children, and numerous injuries.

An SDF source told Al-Monitor on condition of anonymity, “After several contacts with Russia to stop the fighting in the area, and after the failure of the temporary truce, which was twice extended as a result of the National Defense Forces breaching it, the Asayish decided to mobilize its forces and completely expel the Syrian regime from Qamishli. Then we agreed to meet again at Qamishli airport in the northeast of Hasakah province on April 25 to end the dispute. The meeting was attended by the commander of the 17th Division representing the National Defense Forces militia, Maj. Gen. Muin Khadour, with whom we have a good relationship, and Nuri Mahmoud as a representative of the Asayish, and three sheikhs of the Tayy tribe were invited, under the supervision of two Russian officers.”

He added, “A truce was declared after it was agreed that the National Defense Forces would not return to the Tayy and Halako neighborhoods, which fell under the control of the Asayish forces. The National Defense Forces had previously refused to accept this condition, but it realized that it must do so in order to preserve the posts it has left in the area. The autonomous administration is the strongest [party] in the area because of the US support and its control over most of Hasakah province, with the exception of two security squares in the cities of Qamishli and Hasakah, and some villages, in addition to the Qamishli airport, and two military regiments — the 123 Regiment (Kawkab Regiment) near Hasakah and the 154 Regiment (Tartab Regiment) near the city of Qamishli — which are controlled by the National Defense Forces. Despite this, the National Defense Forces did not abide by the agreement until it withdrew from the vicinity of Tayy and Halako neighborhoods, and Russian patrols were launched on the morning of April 26.”

In an April 22 press statement, Saleh Muslim, a member of the Kurdish Democratic Union Party, said the National Defense Forces’ attacks were part of a game that Russia seems to be playing in an attempt to gain popular support as the Syrian presidential elections approach, pointing out that the efforts of Moscow and Damascus aim at striking security and stability, and sowing chaos and panic among the people.

Samer al-Ahmed, an independent journalist from Qamishli residing in Turkey, told Al-Monitor, “The areas controlled by the National Defense Forces are dominated by the Arab component, and most of the people of that area are fighters in its ranks; this is the reason for its control there. However, according to our sources in the area, leaders of Lebanese nationality affiliated with the Iranian Revolutionary Guard Corps arrived in the area in early February and offered to the National Defense Forces leaders financial and logistical support on the condition of their subordination."

He said, "The militia leadership agreed due to the recent decrease of the Syrian regime's support. These neighborhoods have thus become fully controlled by Iran. This prompted Russia to push the Asayish to create a problem through Hajji with Abdel-Fattah al-Layl, one of the leaders of the National Defense Forces, which prompted the latter to kill Hajji. The clashes began after that to include all areas controlled by the National Defense Forces.”

He added, “By following up on the most recent events, we were able to document the killing of 10 civilians, including a child, and the injury of 13 others, including three children, in addition to material damage to civilian homes, as a result of the use of medium weapons such as RPG launchers and mortar artillery. Five Asayish members and eight National Defense Forces fighters were killed, including a lieutenant, in addition to several injuries among both parties. The regime lost the neighborhoods of al-Zuhur, Tayy, Halako and al-Khaleej Street.”

Ahmed noted, “The people returned to their homes in two batches — the first on April 26 and the second on April 27. But the families of the National Defense Forces fighters have yet to return.”

Sheikh Hassan al-Taii, of the Tayy tribe, was subjected to an assassination attempt by unknown persons in front of his house in the city of Qamishli. This took place two days after the assassination on April 23 of Sheikh Hayes al-Jaryan from the Bani Sabaa clan, who had initiated the truce, after a meeting he attended with notables and elders of the Qamishli clans to resolve the dispute between the National Defense Forces and the Asayish forces.

Wael Alwan, a researcher at the Jusoor Center for Studies and Development residing in Turkey, told Al-Monitor, “Through these clashes the Syrian regime tried to sow ethnic sectarian strife and persuade some tribal sheikhs to support it and tried to convince them that the SDF had attacked the Tayy tribe, which includes 12 clans."

He noted, "[The regime] based its argument on the killing of two sheikhs, but it eventually failed to reach its goal once Russia imposed the truce. Removing the Iranian-backed National Defense Forces militia from the area is for the benefit of Russia since it is trying to get rid of the Iranian influence, which is the weakest link in that area. Besides, the SDF would benefit as well since it seeks coordination with Russia to end the internal crises.”