Russia and Iran are seeking to build a tribal army within the Syrian Democratic Forces' areas in Hasakah to protect the regime’s survival near the sources of oil and agricultural wealth. 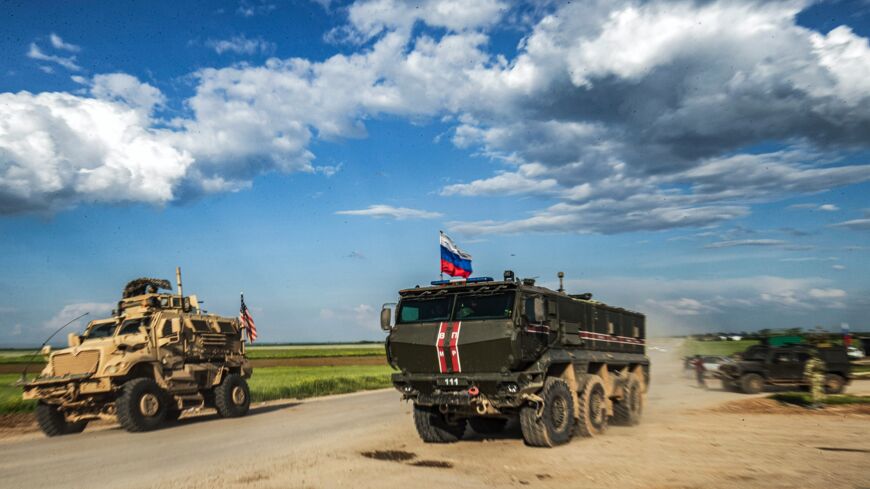 A Russian military police armored truck drives past a US military MRAP (Mine Resistant Ambush Protected) vehicle near the village of Tannuriyah in the countryside east of Qamishli in Syria's northeastern Hasakah province on May 2, 2020. - DELIL SOULEIMAN/AFP via Getty Images

ALEPPO, Syria — The Syrian government seeks to expand its influence and strengthen its military presence by relying on the Arab tribes in Hasakah province, which is under the control of the US-backed Syrian Democratic Forces (SDF). It seems the government’s alleged efforts are supported by its allies, Russia and Iran, which attach great importance to the strategic areas of northeastern Syria that are rich in oil resources.

Tribal sources in Hasakah province told Al-Monitor on condition of anonymity, “The two countries, Iran and Russia, are seeking to secure for the regime the necessary means to protect its presence in the face of the SDF and the United States and to prevent any attempt to restrict and expel it from the area. These efforts became clearer after tension erupted in Hasakah governorate between the Syrian regime and the SDF at the beginning of 2021, when the SDF imposed a siege on the regime in the security enclaves of the regime in Hasakah and Qamishli. Since then, the regime has turned to the Hasakah clans, and serious calls began to emerge about including more Arab tribesmen loyal to the regime in Hasakah in the ranks of the militias and arm them.”

The National Defense Forces, which is an auxiliary to the Syrian government forces, recently announced the graduation of a batch of fighters in the city of Qamishli. On April 8, the National Defense Forces in Qamishli published on its Facebook page pictures of military leaders and fighters performing a military parade with a caption that read, “In the presence of the political and military leadership and tribal elders in Hasakah governorate, a new batch of National Defense champions graduated, including 400 fighters who carried out a practical demonstration with live ammunition in Haj Badr village in the countryside of Qamishli.”

The graduation ceremony for the National Defense Forces fighters included recruit training, a military show with live ammunition and maneuvers to deal with the enemy. The Syrian regime’s SANA agency said on April 8, “The people of the southern countryside of Qamishli set up the Tent of the Homeland in the village of Haj Badr in support of the presidential elections and to reject the US and Turkish occupation,” in reference to supporting the election of Bashar al-Assad in the presidential elections scheduled for May 26. The Tent of the Homeland is the celebration held by the tribes in Haj Badr, which also included the graduation of the 400 fighters.

On April 9, Russia’s Sputnik agency quoted the deputy commander of the 17th Reserve Division of the government forces in Hasakah province, Maj. Gen. Mouin Khadour, as saying that “the recruits gained more experience, learned martial arts and received military training under the full supervision of the officers of the Syrian regime,” adding, “The US occupation and its aides infiltrated the Jazira region and seized the wealth of the Syrian people, taking advantage of the Syrian Arab Army and its affiliated forces' preoccupation with fighting the armed terrorist groups that entered Syria through neighboring countries.”

In the same article, Sputnik also quoted Hassan Saloumi, a member of the Syrian People's Assembly and the commander of the National Defense Forces center in Hasakah province, as saying, “The new fighters are ready and will support the Syrian Arab Army forces in any combat mission against terrorist groups and US and Turkish practices and their armed organizations throughout Syria.”

He added, “There is a great turnout from the Arab tribes to join the ranks of the auxiliary military forces of the Syrian Arab Army, and new batches will graduate in the coming weeks so we will have over 1,000 fighters.”

On Dec. 8, 2020, 200 volunteers graduated into the ranks of the National Defense Forces in Qamishli.

A tribal sheikh in Qamishli told Al-Monitor on condition of anonymity, “The new volunteers in the ranks of the National Defense Forces are members of several Arab tribes loyal to the regime, the most important of which is the Tay clan, in addition to a few volunteers from the Adwan, al-Bakara and Jabour tribes.”

He added, “The recruitment campaign that resulted in the enrollment of 400 volunteers in the ranks of the National Defense Forces in Qamishli began in early 2021 following tensions between the regime and the SDF. It seems that the regime is trying to arm the clans to face the SDF if similar tension erupts in the province. The regime fears it would be expelled from Hasakah, so it seeks, by various means, with the help of its allies Russia and Iran, to build a network of relations with the tribes to take advantage of their power if necessary.”

The sheikh pointed out that “the Iranian and Russian forces are strongly present in the regime’s security enclaves in Hasakah and Qamishli and in several military barracks in the province, the most important of which is the Qamishli airport. By recruiting tribesmen, Iran and Russia aim to build a tribal army to take control of the province in the event of a sudden US withdrawal. The Russian and Iranian support for the regime in the area comes as part of their competition with the US over the most important areas of natural resources in Syria.”

He added, “Russia and Iran are working to break the US monopoly on the relationship with Arab tribes and clans in Hasakah, as well as weaken the SDF’s influence. Despite these efforts, I think they will fail for several reasons, the most important of which is that the regime and its allies are unable to finance Arab tribes in Hasakah, compared to what the US and its partners in the international coalition have to offer. Besides, the regime and its allies lack sufficient flexibility and experience to deal with the Arab tribes, compared to the US, which spares no effort to play an effective role in resolving conflicts and providing the necessary support to ensure that the Arab tribes and the SDF stay on good terms.”

The Syrian regime and its allies will not back down from their efforts and attempts to draw closer to the tribes of Hasakah and recruit tribesmen, and the regime will not stop trying to entrench its presence in this key area, even if it cannot, along with its allies, offer the same incentives that the US, the SDF’s ally, has to offer to the tribes.