Syrian tribal leaders based in northeast Syria are calling out Kurdish-led Syrian Democratic Forces over the killing of young tribesmen at the hands of the SDF in demonstrations against the increase of fuel prices. 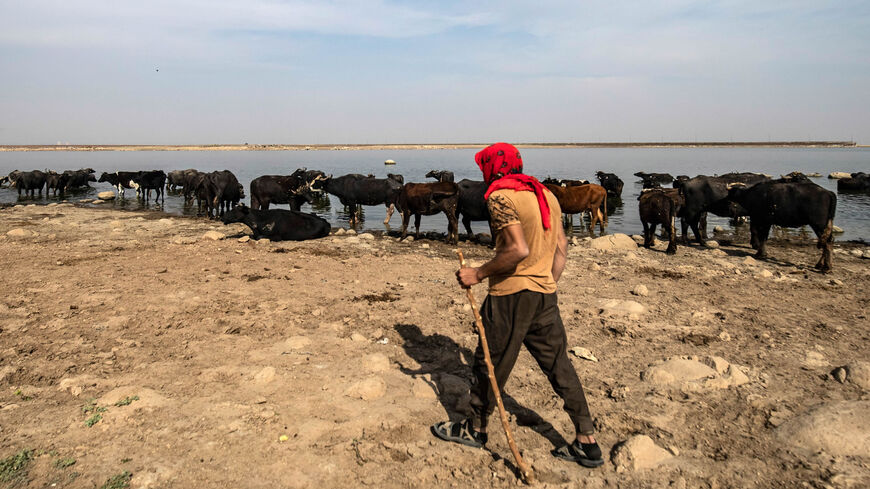 A Syrian farmer watches buffalos as they drink on the shores of the Tigris River in al-Malikiyah (Derik) in the northeastern Hasakah province, Syria, Oct. 31, 2020. - Delil Souleiman/AFP via Getty Images

Major Arab tribes in northeastern Syria recently issued an ultimatum for the Syrian Democratic Forces (SDF) following the killing of several tribesmen during the protests that broke out in Hasakah province in the wake of a May 17 decision by the Kurdish-led Autonomous Administration in North and East Syria to raise diesel and fuel prices.

On March 19, the sheikhs of the Bakara tribe based in the opposition-held city of Azaz issued a statement, mourning the death of several members of the tribe’s al-Burahma clan who were killed during peaceful demonstrations in Hasakah. The statement said that the SDF has killed Salih al-Hamadi, Adnan Abdullah and Daham al-Ani in its crackdown on protesters in the town of al-Shaddadi and in Abadan.

The tribe noted that it strongly denounces and rejects the “crimes of the Democratic Union Party [PYD] militia [that leads the SDF] against the people of the eastern province, mainly the policy of starvation and the plundering of the area’s resources.” The tribe also holds the international coalition forces responsible for the breaches against the population, calling for controlling and monitoring the SDF’s actions.

The statement called on the Arab tribes in eastern Syria, notably in Hasakah province, to mobilize and stand together until the demands of the Syrian people are met, firstly the departure of SDF forces and the [Kurdish] leaders of the Qandil Mountains [near the Iraqi-Iranian border] from the area. The tribe requested the international community and human rights organizations to urgently intervene to protect demonstrators.

Mudhar Hammad al-Asaad, spokesman for the Council of Syrian Tribes and Clans in the city of Azaz, told Al-Monitor, “The statement aims to incite young people in other tribes to rise in the face of the SDF militia, which has been committing human rights violations in the area — whether by recruiting young men and deploying them on the battlefronts, stealing the area’s resources, monopolizing the political rule and sidelining the tribes.”

He said, “The SDF continues to carry out its separatist project by bringing in Kurds at the expense of other social components, while this is an Arab area. The statement came as a reaction to the SDF’s recent practices that are reminiscent of the Syrian regime’s style of oppression and crackdown of demonstrations and the killing of tribesmen."

Asaad noted, “The SDF has managed to silence the tribes in the past by buying off some tribal sheikhs, despite the tribesmen’s objection to SDF practices. But the tribe’s members follow the orders of their leaders and sheikhs, which explains their silence.”

He added, “Given the strong sense of tribalism among the people in the area, we tried to take advantage of what is going on to instigate the sheikhs of other clans and tribes to rise up and avenge the people who were killed and to call for the SDF’s departure. Should this move prove to be successful, it would be the end of the SDF, as this would weaken the position of the tribal sheikhs who are loyal to the SDF at the expense of their own people."

One of the dignitaries of the Bakara tribe in Hasakah told Al-Monitor on condition of anonymity, “The tribes and clans in the area will remain silent on what happened. We will not rest until we avenge the death of our sons who were killed. We are currently coordinating with tribes in other areas, who informed us that they will stand by our side and provide us with [necessary] equipment and young men in our confrontation with the SDF.”

The source said, “We might not be ready at the moment for a direct attack because we do not wish to clash with the international coalition forces. But the SDF is well aware of the tribes’ influence in the area, as they are the indigenous component [in the area] with the largest population density. We will wait for the right moment to set aside any tribal sheikhs who are aligned with the SDF, and who no longer hold sway over their tribesmen. When we are fully ready, we will join hands in the face of the SDF."

Over the past few days, the areas under the SDF control witnessed demonstrations and protests against the forces’ decision to dramatically increase fuel prices. At least seven people were killed in different areas of Hasakah during confrontations with the SDF, which later backed off from its decision, following the wave of popular anger in its areas of control.

Meanwhile, Abdul Aziz Khalifa, a Syrian journalist at Baladi News, a Syrian local news service, from the city of Hasakah and currently based in Gaziantep in Turkey, told Al-Monitor, “The statement [issued by the Bakara tribe’s sheikhs abroad] is likely to have little impact on the tribesmen in the area, who consider the foreign-based sheikhs as having fled abroad and thus no longer enjoy the same influence.”

He noted, “But this does not mean that the local tribal sheikhs are no longer influential in their community. This is evidenced by the fact that the SDF quickly backtracked on its decision, fearing the expansion of protests to the rest of the areas that are predominated by Arab clans.”

Khalifa explained that the southern Hasakah area is seen as one the poorest parts under the SDF control, which is already reeling from the bad economic crisis, the coronavirus restrictions and the recent drought that hit the area, not to mention the SDF’s ongoing looting of the area’s resources without allocating any of them to better serve the population.

“People have finally come to realize what is happening and that the SDF has become a de facto authority, whose job is to increase the funds of the Kurdistan Workers Party affiliated with the PYD and that the gains from the area’s resources — be they oil and any other natural wealth — are going to the pockets of a certain group of people, i.e., the Kurds, with total disregard of the rest of the Arab components. The decision to increase fuel prices was the last straw that mobilized the population,” he said.

He further argued that there is no end in sight for the conflict between the SDF and the tribes. “The foreign-based tribal sheikhs and those opposed to the SDF at home will try to take advantage of the recent events to galvanize efforts against the SDF. A direct clash, however, is unlikely, given the fact that the SDF is a heavily armed militia backed by the international coalition forces. The tribes will wait for the right opportunity to rise up,” Khalifa concluded.