Hayat Tahrir al-Sham has been paying more attention to Arab tribes and clans to benefit from them in expanding its influence in social circles and in recruitment processes. 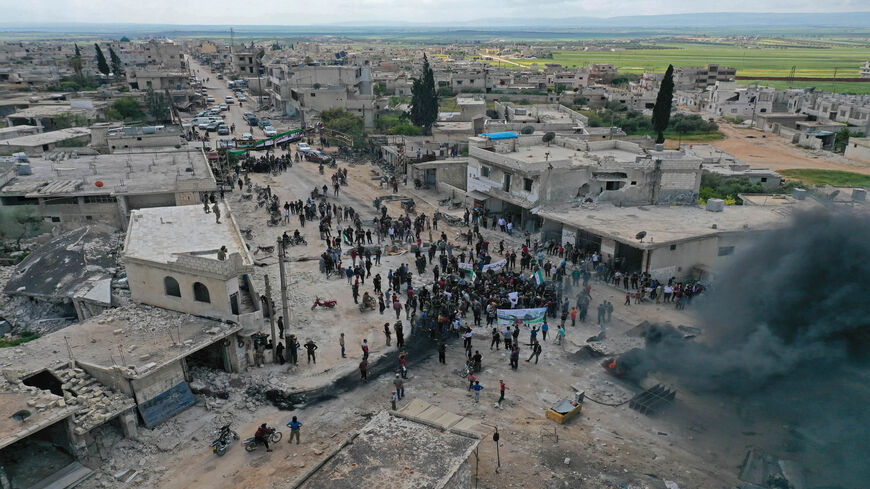 A drone images shows Syrian demonstrators gathering during a protest in the village of Maaret al-Naasan to protests against a reported attack by Hayat Tahrir al-Sham, Idlib province, Syria, May 1, 2020. - Omar Haj Kadour/AFP via Getty Images

ALEPPO, Syria — Hayat Tahrir al-Sham (HTS), which controls Syria’s northwestern province of Idlib, seeks to attract Arab tribes and clans in its areas of control and is working to build friendly ties with them.

The various forces in Syria have been adopting a policy to get closer to the tribes during the past years, to mobilize support and extend their influence, as well as to recruit them in their military factions.

On Sept. 3, al-Bosraya clan organized a forum for the clan’s members and dignitaries in Idlib. Al-Bosraya is one of the Arab clans belonging to al-Uqaydat tribe whose tribesmen are spread throughout Aleppo, Deir ez-Zor, Raqqa, Hasakah and other Syrian governorates.

Today, HTS is seeking the loyalty of some of these tribesmen who reside in its areas of influence in Idlib.

Abu Khaled al-Uqaydi, official spokesman for al-Uqaydat tribe, said at the Sept. 3 forum, “History will praise those who fought the enemies and led the nation to safety. May God protect our ship’s captain, [HTS leader] Sheikh Abu Mohammed al-Golani, who raised the Arab Islamic banner and created a generation of heroic mujahedeen stationed on the frontiers of glory and dignity.”

Such praise for Golani shows that the members of al-Bosraya clan and the tribesmen of al-Uqaydat tribe residing in Idlib have a good relationship with HTS.

A sheikh from al-Uqaydat tribe told Al-Monitor on condition of anonymity, “The forum organized by al-Busraya clan was sponsored by HTS, which has become very concerned with the affairs of the Arab tribes. A large number of dignitaries and military officials from HTS and its affiliated salvation government in Idlib attended the forum.”

In late August, the Arab Bakara tribe held its first conference in Idlib, during which it announced the establishment of a Shura Council representing the tribe. This council was viewed as a new form of division within the Bakara tribe, which has multiple loyalties since its clans are located in various Syrian governorates.

One of the dignitaries of the Bakara tribe in Idlib told Al-Monitor on condition of anonymity, “HTS sponsored the tribe’s conference. Sheikh Youssef Arbash was elected as head of the Shura Council, along with two deputies — Asaad Issa al-Sheikh and Asaad al-Ali.”

He added, “Many tribesmen from the Bakara tribe and al-Uqaydat tribe have joined the ranks of HTS. Among them is Jihad Issa al-Sheikh, who is close to Golani and is a member of HTS’ public relations office. By drawing closer to the Arab tribes, HTS aims to expand its authority in Idlib, and to benefit from the tribes by recruiting fighters.”

HTS’ salvation government had sponsored a clan conference in Idlib in June 2018, during which the Syrian Tribal Shura Council was established. This council is considered an umbrella for the tribes and clans loyal to HTS in Idlib. In May, Golani met with the council’s sheikhs on the occasion of Eid al-Adha.

Mohammed al-Sukari, a researcher at the Istanbul-based Jusoor Center for Studies, told Al-Monitor, “HTS has begun to pay special attention to the Arab tribes in Idlib, for several reasons, most notably to raise its popular base and to extend its control over the public opinion. It is thus competing with other forces that are trying to attract the clans, such as the FSA, the Syrian regime and the SDF.”

Saleh al-Abdallah, director of the local Baladi website in Idlib, told Al-Monitor, “All the de facto authorities in Syria — which have areas of influence, i.e., the regime, the SDF and the Turkish-backed FSA — are trying to give legitimacy to themselves by developing their popular bases. These forces gloat over serving their people and claim that they are maintaining safety and security. HTS is now following suit despite being late to the party.”

Abdallah noted, “After gaining absolute control in Idlib, HTS was bound to try and attract tribes and clans, because they are significant social entities in the social milieu. Dignitaries and sheikhs have great weight among their followers, so drawing closer to them would ensure the loyalty of numerous tribesmen. Meanwhile, Arab tribes and clans in Idlib want to be on HTS’ good side since it is the de facto authority and they want to preserve and protect their interests.”

Abdulaziz al-Khalifa, a journalist who works with Baladi, Al-Monitor, “Since the beginning of the Syrian revolution in 2011, most of the Arab tribes and clans have adopted a pragmatic policy in dealing with various forces. Many tribes are thus divided, because each clan is looking to protect its interests to ensure its survival in all areas controlled by different forces.”

He said, “These tribes and clans are now divided and their system of governance and administration has become decentralized. Each tribe now has different sheikhs in different areas who run the tribe’s affairs based on the situation in each area, often with the support of the dominant force there.”

Khalifa concluded, “All the forces in control of different Syrian areas are trying to invest in the clans and tribes. HTS will benefit greatly from the clans in several aspects, such as recruitment and building a loyal social base from the tribal community that supports it.” 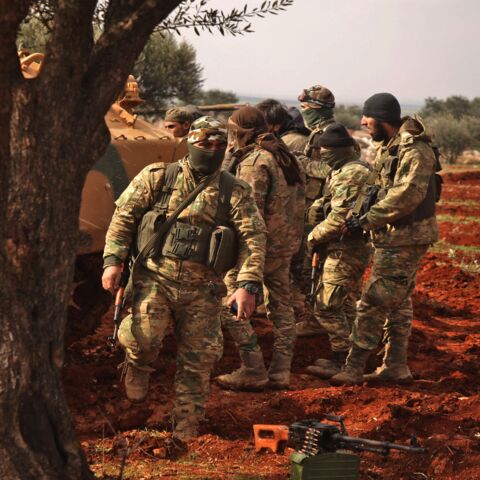