The government run by Hayat Tahrir al-Sham in Idlib imposed more measures to isolate its areas of influence in northwestern Syria. 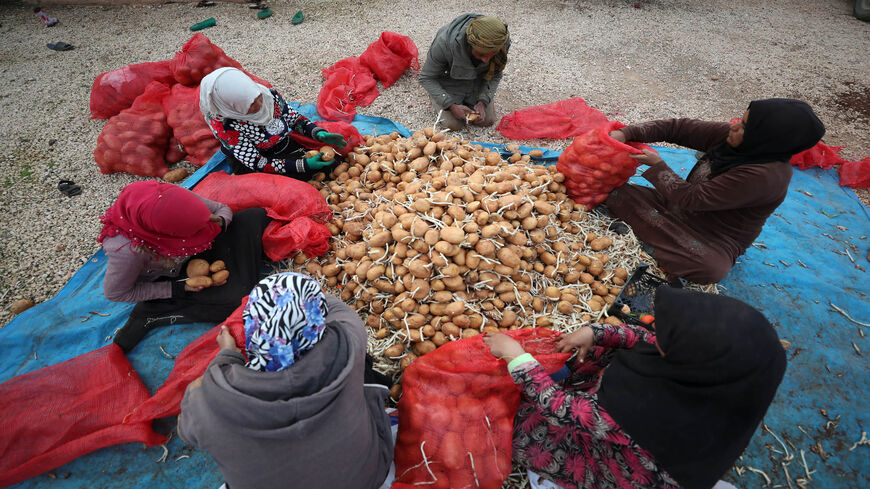 ALEPPO, Syria — Hayat Tahrir al-Sham (HTS) seems to be running an independent emirate in Idlib by imposing more measures that restrict the movement of goods and individuals.

HTS has been designated a terrorist group by the United States and in UN Security Council resolutions.

HTS and it's so-called Syrian Salvation Government, which controls Idlib province, northwest of Syria, is trying to take over the various civil sectors and isolate its areas of influence from the areas controlled by the Turkish-backed Free Syrian Army (FSA) in the countryside of Aleppo.

In this vein, on Aug. 19, HTS members at the checkpoints on the confrontation line with the FSA factions in the Afrin area in Aleppo countryside prevented civilians from bringing in vegetables to Idlib.

Earlier in August, the Salvation Government had banned the entry of many types of goods and vegetables, such as Jew’s mallow (mulukhiyah), coming from the FSA-controlled areas in the countryside of Aleppo to its areas of influence in Idlib. The ban decision allegedly aims to protect the local producers of these crops and goods.

The entry ban aroused widespread ridicule among the opposition. Activists in Idlib believe the ban is aimed at intensifying pressure on people, raise prices and give privileges to merchants working for HTS in order to control the market and impose their own crops and goods. They argued the decision also allows HTS, which controls the crossings between its areas of control in Idlib and the areas controlled by the FSA in the countryside of Aleppo, to impose more royalties and taxes on people.

Journalist Salwa Abdel Rahman tried to conduct an opinion poll and asked people in Idlib about the repercussions of the crop ban decision from the countryside of Aleppo to Idlib. In an Aug. 20 Facebook post she wrote how fearful merchants and shoppers are to talk about this matter. “Everyone is upset and affected by the decision in terms of prices. For the first time I was unable to conduct my survey,” she said.

Abdel Rahman's observation reflects the fear among Syrians in Idlib and their reluctance to criticize the HTS government, even when its decisions further exacerbate their living conditions.

Moreover, HTS had imposed its control over trade unions in Idlib. Most recently, it controlled the Idlib branch of the Lawyers Syndicate. It transformed it into an independent syndicate affiliated to it only, despite the presence of a Lawyers Syndicate in opposition areas close to the interim government backed by Turkey. The HTS authorities prevented lawyers not registered with the syndicate it founded from pleading before the courts of the Ministry of Justice affiliated with it.

A lawyer in Idlib told Al-Monitor on condition of anonymity, “The Salvation Government’s establishment of an independent lawyers syndicate falls within the scope of a series of restrictions it has been implementing on lawyers since it took control of Idlib in 2018. At that time, the security forces of HTS in the Khan al-Asal area near Aleppo attacked the office of the Free Lawyers Syndicate in Aleppo. Some lawyers were even assaulted. They were searched before entering the courts and prevented from bringing their personal phones with them. A lawyer was even arrested by a student of forensic sciences and imprisoned for some time.”

He said, "The Salvation Government’s restrictions were not limited to establishing a lawyers syndicate. It forced lawyers in the opposition areas to work under its umbrella. On July 11, Minister of Justice Anas Sulayman issued Circular No. 5 that stipulates a number of decisions. Article 1 of the circular states that only lawyers affiliated with the Free Lawyers Syndicate [established by the Salvation Government] have the right to practice the legal profession and plead before the courts of the Ministry of Justice. The circular was internal and was not published publicly.”

The lawyer added, “Article 1 of Circular No. 5 excluded hundreds of lawyers in opposition areas, prohibited them from working and practicing the profession in Idlib, and prevented them from handling cases and pleading before the courts if they were not registered with the syndicate formed by the Salvation Government. This prevents lawyers from working and securing their livelihood. It is a maneuver to twist their arms and force them to yield to it and to HTS. Lawyers should not be bound by government decisions but rather subordinated to syndicates that regulate their profession. They should not face the ultimatum of submission or exclusion.”

The Free Lawyers Syndicate, independent from the HTS-affiliated Salvation Government, and based in Azaz, north of Aleppo, rejected Circular No. 5 in a July 18 statement. It affirmed that it is an independent revolution-affiliated national entity and a collective body for all lawyers opposing the Syrian regime. The syndicate denounced the attempt to tear it up by any party in a bid to serve narrow interests and ideologies.

Mohammed al-Sukari, a researcher of jihadist groups at the Jusoor Center for Studies in Istanbul, told Al-Monitor, “HTS seeks to appear as a supporter of civil rather than military institutions. It is striving to control and empower its administrative sectors in its areas of influence in Idlib. HTS is well aware that the international community will not communicate with any radical military institution. This is why it is empowering and promoting the civil sector.”

He noted, “By managing the areas under its control and conferring to them a civilian appearance, HTS would increase the possibility of isolating these areas as separate from other opposition forces. This would also encourage some regional and international forces to seek rapprochement [with HTS] regarding these areas. HTS’ project is threatened by the existence of trade unions and syndicates that protect and represent their own members, especially the popular base resentful of the exclusion policies that HTS is imposing. This is why HTS is seeking to contain and regulate trade unions under the strategic vision of the Salvation Government and behind it HTS.”

Sukari concluded, “HTS may be trying to convey a message that the forces controlling Idlib province are separate from those in northern Aleppo, which is controlled by the Turkish-backed FSA and must be dealt with independently and given political privileges at the level of the political solution in Syria.”