Hayat Tahrir al-Sham in Idlib demanded all the tribes in the areas it controls to coordinate with it to form separate Shura councils, with the aim of controlling the decisions taken by these tribes and expanding its popular base. 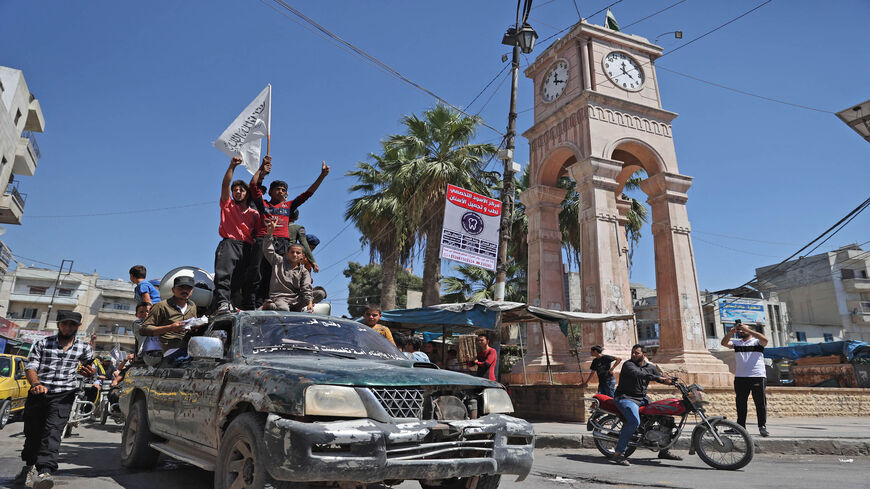 Members of Syria's top jihadist group Hayat Tahrir al-Sham, led by al-Qaeda's former Syria affiliate, parade with their flags and those of the Taliban's declared "Islamic Emirate of Afghanistan" at the Clock Square in the center of the rebel-held northwestern city of Idlib, Aug. 20, 2021. - Omar Haj Kadour/AFP via Getty Images

During its inauguration conference Aug. 28, the Arab Bakara tribe announced the establishment of a Shura Council in Syria’s northwestern city of Idlib, which is under the control of Hayat Tahrir al-Sham (HTS).

On Aug. 30, the Lebanese Al-Modon newspaper quoted a source from the Bakara tribe as saying, “HTS sponsored the tribe’s conference, which was attended by representatives of HTS and its salvation government, in addition to several sheikhs and dignitaries from the Council of Syrian Tribes and Clans. Sheikh Youssef Arbash was elected as head of the Shura Council, along with two deputies — Asaad Issa al-Sheikh and Asaad al-Ali.”

Mohammed al-Hassan Abu al-Abed, one of the dignitaries of the Bakara tribe in Idlib, told Al-Monitor, “The Bakara tribe includes 29 clans mainly scattered in the governorates of Aleppo, Idlib, Hama, Homs, Raqqa, Deir ez-Zor and Hasakah. Twenty-one of these clans are located in opposition-controlled areas. Our goal is to have the Shura Council unite the tribesmen in all of these areas. Each clan has its own council, and we, as the people of this tribe, were able to gather these clans in the HTS-controlled areas as well as in those held by the Free Syrian Army [FSA].”

He said, “Many tribesmen are members of HTS, fighting against the Syrian regime. Our conference was the most popular among the tribal conferences in the area with over 5,000 people attending.”

Abu Khaldoun al-Hwaiz, the Bakara tribe’s political official, told Al-Monitor, “The Shura Council does not only coordinate with HTS but with all the factions that are fighting the regime. The majority of our tribesmen are fighters in the ranks of HTS because it has the widest authority. Among them is Jihad Issa al-Sheikh, who is close to HTS leader Abu Mohammad al-Golani. Sheikh is a member of HTS’ public relations office and handles all communications between the opposition factions and HTS.”

He added, “At the conference, we announced that we are on the same side as all the factions. The Shura Council is a comprehensive authority whose mission is to vote and decide on all the issues related to the tribe. The council is independent and HTS cannot dictate any decisions, but it is possible to coordinate with it to better serve our area and to help us solve the tribe’s problems.”

Mudar Hammad al-Assaad, spokesman for the Council of Syrian Tribes and Clans, told Al-Monitor, “HTS, as a de facto authority, demanded the tribes in the areas it controls to coordinate with it in order to form separate Shura councils, to organize the affairs of each tribe, to solve its problems and to settle disputes. However, the tribes cannot take decisions independently regarding all issues; HTS is the ultimate decision-maker.”

Assaad added, “The tribes have very strong ties with HTS. We, as the Council of Syrian Tribes and Clans in the FSA-controlled areas, do not coordinate with the councils formed in Idlib, because the dignitaries in Idlib are not affiliated with us; they are from other areas.”

Many tribesmen from the Bakara tribe are loyal to the Syrian regime and fight alongside its forces. In late 2012, the Baqir Brigade was formed in Aleppo as the first tribal militia whose members belong to the Bakara tribe and which is led by Khaled al-Marhi. The Bakara Brigade started receiving Iranian support in 2013, which facilitated its expansion toward the areas in the countryside of Raqqa and Deir ez-Zor. It seems that Iran is backing tribal militias in Syria to enhance its military, cultural and religious influence.

Wael Olwan, researcher at the Istanbul-based Jusoor Center for Studies, told Al-Monitor, “The division within the Bakara tribe is seen by all Syrian tribes and clans. All political and military parties [in Syria] seek the support of tribes to benefit from the tribesmen’s fighting skills. Throughout the Syrian war, the Bakara tribe found itself compelled to divide itself to ensure its survival and the interests of its people in the areas controlled by different parties. As a result, the tribe’s system of governance and administration has become more decentralized than ever, and the same tribe ended up with three or four different sheikhs.”