After the defeat of IS in Raqqa, the still-warring Syrian regime and opposition forces as well as outside interested parties are trying to win over Syrian tribes to their sides to guarantee their roles in determining Syria's direction. 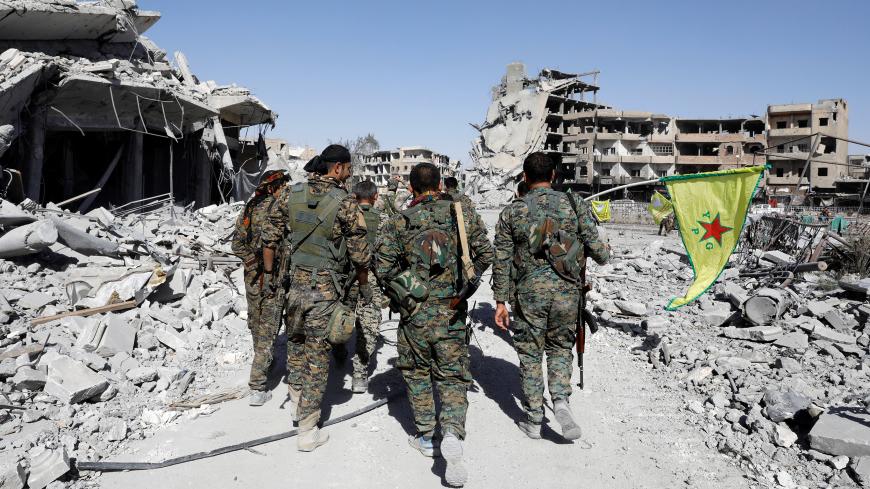 In the aftermath of the Islamic State (IS) siege on Syria and as the civil war continues to linger, attention is now turning to the tribal forces that could wield significant influence over the country's future.

IS considered Raqqa to be its headquarters in Syria until it was driven out in October by US-backed militias, including the predominantly Kurdish Syrian Democratic Forces (SDF). In December, Russian President Vladimir Putin announced the defeat of IS on both banks of the Euphrates River in Syria.

Raqqa province, which includes the city of Raqqa and the nearby countryside north of the Euphrates River, is home to numerous tribes. The defeat of IS unleashed competition between the Syrian regime and the SDF to attract Raqqa’s tribes. Each side wants to win the backing of these influential tribes, which could help give the allies the tribes choose a strong foothold in Raqqa.

In the post-IS stage, the various victorious parties want to woo the Syrian tribes, which are now trying to unite their ranks in combat formations in a bid to militarily and politically shape the next government.

This race between the Syrian regime and the SDF seems to parallel an indirect competition between Russia and the United States to win over tribes throughout Syria. Observers also note that Turkey may enter this competition for tribal influence in northern Syria amid what Ankara perceives as intensifying risks from the Kurdish People's Protection Units (YPG) at its borders. The YPG plays a large role in the SDF and is the Syrian extension of the Kurdistan Workers Party (PKK), which Turkey considers a terrorist group.

Ankara last week launched an attack on Kurdish positions in Afrin in Aleppo province near the Turkish border, just west of Raqqa province.

Syrian tribes seem divided when it comes to choosing their interim alliances. Mudar Hammad al-Asaad, general coordinator of the Supreme Council of Syrian Tribes, told Al-Monitor that the internal alliances between some Arab tribes and Kurdish parties, such as the Democratic Union Party (PYD), are not tribal-oriented or socially driven as much as they are temporary political and military alliances.

The division is clear, given recent meetings held with opposing goals.

The Supreme Council of Syrian Tribes and Clans held a general conference Dec. 11 in Istanbul in the presence of 90 tribes and clans and 362 tribal representatives. Conference spokesman Hammad al-Asaad told Al-Monitor, “The conference emphasized the need to ward off sectarian fighting and to withdraw the legitimacy of clans and tribes allied with the regime.”

Meanwhile, the influential Jabour tribe in Hasakah on Jan. 4 launched a council aimed at unifying tribe members into one entity that represents them. The state's official SANA news agency quoted Hasan al-Meslet, a member of the pro-regime People’s Assembly and sheikh of the Jabour tribe, as saying, “The tribe’s meeting comes … to confirm the unity of Syria under the leadership of President Bashar al-Assad.”

The Syrian regime went further, supporting the unity of cross-border tribes between Syria and Iraq in order to garner the greatest possible political and military support.

In turn, the SDF, whose Kurdish units represent their main task force, is seeking the support of the US-led international alliance to cooperate with the tribes in Jazeera province.

According to SDF sources, in a Dec. 10 meeting with SDF and tribal leaders in Deir ez-Zor, US-led alliance officers confirmed that the military partnership with the SDF is strong and ongoing. In turn, the SDF said tribal sheikhs regard the SDF as “the national force and the legitimate authority and the only force they support in Deir ez-Zor.”

Tribes and clans, which constitute more than 30% of Syrian society, mirror the Syrian population; these groups include Arab, Kurdish, Turkmen, Syriac, Alawite and Druze tribes.

However, Hammad al-Asaad told Al-Monitor that many of these tribes are affiliated with various fronts and armies linked to various Syrian political parties. “The Syrian regime has formed the Tribal Army to fight other Syrian components. This will fuel sectarian and nationalistic fighting,” he said.

The country has not witnessed any large-scale tribal infighting since 2011. According to analysts, such fighting has been thwarted by the appeals of tribal sheikhs. The Syrian conflict is not tribal, but rather military and factional among parties that do not represent tribes.

Some people fear the political division among tribes and the multiplicity of affiliations in the future could affect the national identity of Syria and turn it into a tribal rather than a civil state. However, Hammad al-Asaad said a return to tribalism would be temporary and linked to the current situation. “This inclination toward tribes will end with the end of the [civil war]. The Syrian people are conscious of this. After the conflict, the people will defer to the state and abide by the new public order. For their part, the Syrian tribes will accept the new regime and republican rule.”

Political analyst Ahmed Ghannam pointed to external factors that strengthened tribalism. “Countries involved in the Syrian conflict and that have a tribal extension in Syria are behind this. Their objective is to control the largest possible share of the Syrian society,” he told Al-Monitor. “Neighboring countries are capable of pitting Syrian components one against the other to serve their own interests.”

Foreign countries' influence is mainly seen in the formation of opposition bodies and negotiating committees. Ghannam said, “Tribes have the highest representation in these bodies. Arab Gulf countries see Syria as a tribal state. This would make it easier for them to impose their control.”

He added, “Qatar, Saudi Arabia and the UAE [United Arab Emirates] are originally tribal countries, and they made sure the Syrian tribes are fairly represented in political bodies, in light of their tribal extension with Syria. By preserving the loyalty of Syrian tribes, Arab Gulf states believe they can guarantee themselves future influence in Syria.”

Speaking about Western countries, he affirmed they still seek to influence the tribes, noting that the West knows that tribes act collectively and not individually. “The tribal identity will never come before the national civil identity,” Ghannam said.

Amid the ambiguity surrounding the Geneva peace negotiations between the regime and the opposition, and the failure to reach a political solution so far, the Syrian tribes will continue to be a magnet for the various forces. The tribes will thus remain torn between the warring parties in the battle of survival. This situation could affect their status as a united social force. "In the future, the tribes are likely to pledge loyalty to the strongest party. This is only natural," Ghannam said.

The Syrian regime will keep striving to win over more tribal leaders. Ghannam said, “Some tribal leaders obtained very special privileges in the areas controlled by the regime in Damascus. They seem to be waiting for the right [safe] conditions to move back to their areas east of the Euphrates and to announce their loyalty to the regime there.”