There was more fighting between the Kurdish Asayish and pro-government National Defense Forces in the northeast Syrian city last night. 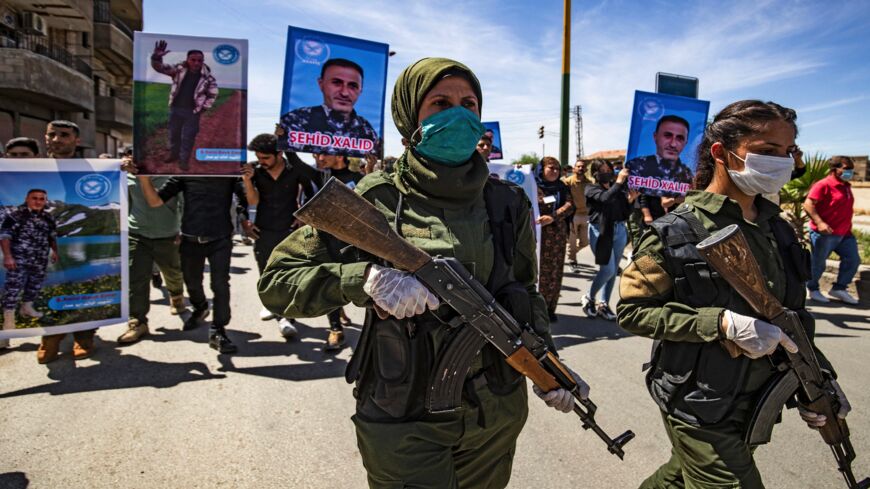 Female members of the Syrian Kurdish internal security services known as Asayish march in a procession ahead of the body of their fallen comrade Khalid Hajji, who was killed following clashes with pro-regime forces, during his funeral in Syria's northeastern city of Qamishli on April 22, 2021. - DELIL SOULEIMAN/AFP via Getty Images

Clashes between Kurdish and pro-government forces continued in the northeast Syrian city of Qamishli last night. The situation is calmer today, according to Kurdish media.

Fighting broke out again the evening of April 25 between the pro-government National Defense Forces and Kurdish internal security forces known as Asayish in the city’s Tayy neighborhood, Hawar News Agency reported. Guns and rockets were used.

There have been clashes in Qamishli for several days. The incident began last week during a checkpoint dispute between the two forces.

Qamishli is the administrative center of the Autonomous Administration of North and East Syria. It is led by the Democratic Union Party, which supports Kurdish autonomy in the region. The Syrian government also has a presence in the city, including in largely Christian areas and at the airport.

The US-backed Syrian Democratic Forces (SDF) are the dominant military force in the administration’s territory, and the Asayish also handles security. The Democratic Union Party’s armed affiliate, the People’s Protection Units (YPG), leads the SDF. Northeast Syria has a mixed population of Kurds, Arabs, Syriac Christians and others, and there are several political parties there with varying degrees of support.

The SDF and the YPG have both fought and worked together with Syrian government forces at various times during the civil war. The Autonomous Administration is not officially recognized by Damascus, and the Qamishli clashes are an example of tensions between the two entities.

The situation in the city improved today, according to Hawar News Agency, which is affiliated with the PYD. People who left their homes to escape the fighting returned to Tayy today. The National Defense Forces still have a presence in the area, the agency reported.

Some Arab tribes have sided with the government in the dispute, according to Syrian state media. The Al-Ubaid tribe said in a statement reported by the official SANA news outlet that they oppose “all forms of terrorist practices carried out by QSD militia and Asayish militia backed by the US occupation,” using an Arabic-language acronym for the SDF. Other tribes released similar statements on the Qamishli situation, according to SANA.