President of Executive Committee of the Syrian Democratic Council Ilham Ahmed spoke at a virtual event at the DC-based Newlines Institute today. 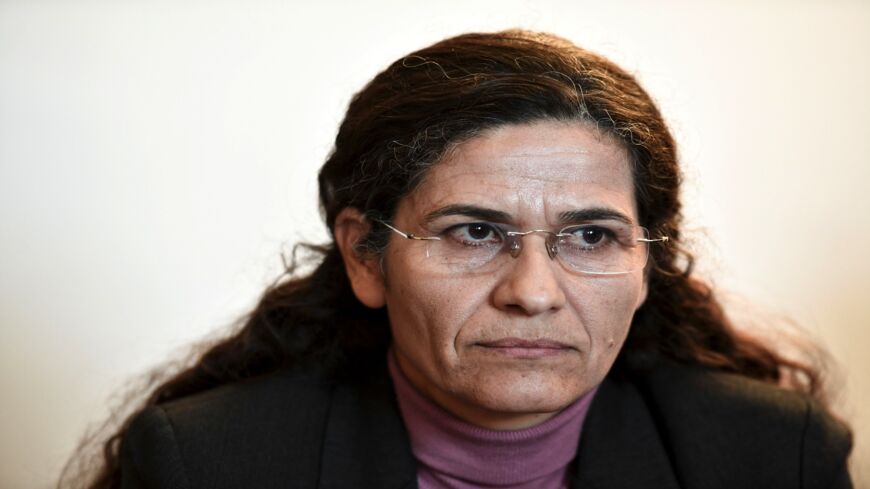 One of the two top political leaders of the Syrian Kurdish alliance and co-chair of the Syrian Democratic Council Ilham Ahmed attends a press conference, in Paris, on Dec. 21, 2018. - STEPHANE DE SAKUTIN/AFP via Getty Images

A Syrian Kurdish official said today she hopes the United States will keep its forces in the region in the future no matter who is president.

“What we have seen is that each president comes from a party that has its own strategy and policy regarding Syria,” Ahmed said in response to Al-Monitor’s question. “We expect overall that the strategy for the US is to protect firstly its homeland security by fighting terrorism alongside Kurds and the Syrian Democratic Forces.”

Ahmed spoke about the situation in northeast Syria at a virtual event held by the Washington-based think tank. The area is known as the Autonomous Administration of North and East Syria, and the Democratic Union Party is a major party in the region. The administration has a significant degree of autonomy, though the Syrian government has a limited presence in the region and does not fully recognize its administration. The population consists of Kurds, Arabs, Aramaic-speaking Christians, Turkmen, Yazidis and others.

The main military force in the region is the SDF, which the United States backed against IS. The Kurdish paramilitary People’s Protection Units lead the SDF, though Arab and Christian fighters make up a portion of its force.

Ahmed referenced former President Donald Trump’s repositioning of troops in Syria during her remarks. In 2019, Trump announced a withdrawal of US troops from northeast Syria to make way for a Turkish military intervention against the SDF. Trump ended up keeping US troops there, but the announcement and repositioning of US forces enabled Turkey to attack. The troops are currently remaining in Syria under current President Joe Biden’s command.

Ahmed said she hopes the United States does not plan to withdraw again in the future.

“We hope that Syrian Kurdish fighters do not see the same decision of withdrawal and that the US protects its allies who helped fight [IS] for years,” she said.

Most of the National Defense Forces have since left the Tayy neighborhood where the violence took place, but they maintain a limited presence at a Syrian government site and Kurdish authorities fear the fighting could return again. Ahmed said the pro-government force should completely leave Qamishli.

“There’s a need to expel this group from Qamishli because they are always causing problems,” said Ahmed. “They randomly kidnap and arrest people and sometimes arrest civilians.”

The Autonomous Administration's efforts to negotiate with the Syrian government on the issue have failed, according to Ahmed.

“We asked for negotiations with the regime many times, but they did not accept to resolve the problems with dialogue,” she said.

On the issue of foreign IS-affiliated detainees in the region, Ahmed repeated administration and UN calls for countries to take back their citizens from camps and detention centers. She also said the administration fully expects Syrian President Bashar al-Assad to win upcoming elections in the country.

“We’re not expecting any change,” said Ahmed. “The president will remain the same.”