Four US service members were injured last month when a Russian troop carrier rammed a US military vehicle. 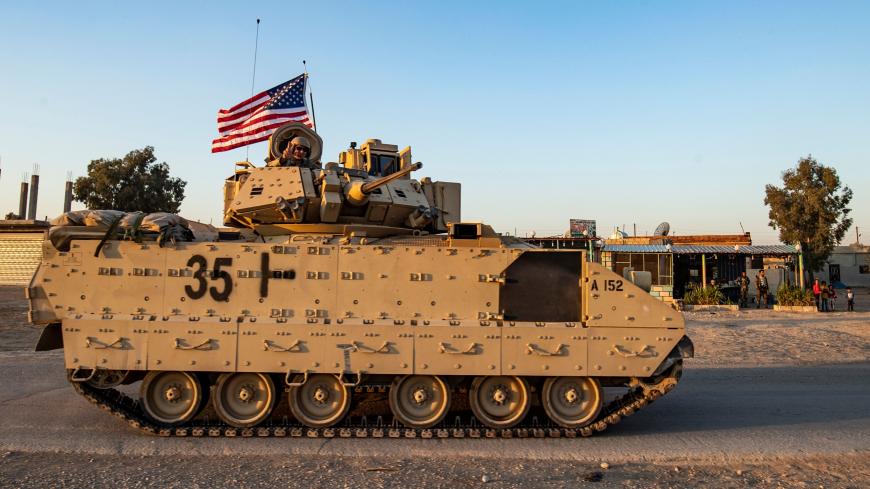 A US Bradley armored personnel carrier drives near the town of Tal Tamr in northeastern Syria's Hasakah province on the border with Turkey, on Nov. 10, 2019. - DELIL SOULEIMAN/AFP via Getty Images

American Bradley Fighting Vehicles have deployed to northeast Syria, the US-led international coalition against the Islamic State (IS) announced this evening.

The deployment of mechanized infantry and the armored vehicles is intended to “ensure the protection of Coalition forces and preserve their freedom of movement so they may continue Defeat Daesh [IS] operations safely,” coalition spokesman US Army Col. Wayne Morotto said.

Last month, a Russian troop carrier rammed a US up-armored vehicle in a heated off-road encounter that left four US soldiers with mild concussion-like symptoms.

The two sides have engaged in a number of tense standoffs on contested roads in Syria’s Kurdish-controlled northeast, despite US attempts to safely pre-arrange patrolling areas with their Russian rivals.

Gen. Kenneth “Frank” McKenzie, the head of US forces in the Middle East, told NBC this week that the Russians’ “behavior has been better” since Chairman of the Joint Chiefs of Staff Gen. Mark Milley phoned his counterpart, Gen. Valery Gerasimov, over the latest incident.

The United States previously deployed armored vehicles to eastern Syria in October 2019, after the coalition hastily pulled back across Syria’s northeast to consolidate around prized oilfields in a truncated area of operations.

The move also saw some 1,400 US troops eventually leave Syria, according to official numbers.

The retreat was precipitated by a phone call between President Donald Trump and Turkey’s President Recep Tayyip Erdogan, after which US forces were ordered to stand aside as Ankara’s military and its Syrian proxy forces attacked the Kurdish-led militias that had borne the brunt of the US-led coalition’s war to defeat the Islamic State.

Russian and Syrian government forces rapidly moved into the area, on the east side of the Euphrates River, to fill the void left by the Americans last year.

Since then, US military officials have remained to “guard the oil,” in Trump’s words.

Long coveted by the Bashar al-Assad regime and Russia, the oilfields in Deir ez-Zor and Syria’s northeast are a valuable revenue source for the Kurdish-led Syrian Democratic Forces, and a major bargaining chip in store for potential future negotiations over their reintegration into a unified Syria.

Since the coalition’s consolidation, deconflicting with the Russians has become far more complex, US officials have said.

In June, Russian forces reportedly attempted to set up an outpost in Derik, not far from a main US supply line into the autonomous Syrian region.

Last month, a Syrian fighter was reportedly killed when a firefight broke out between a Syrian pro-regime checkpoint and a US patrol.

Likely seeking to appease Turkey — which accuses the SDF of being led by Kurdistan Workers Party terrorists — the United States has not overtly pushed to include northeast Syria’s autonomous administration in the Geneva talks to resolve Syria’s conflict.