The head of Syria’s Kurdish-led militias said he met today with the top commander of US forces in the Middle East, Gen. Frank McKenzie, in northeast Syria. 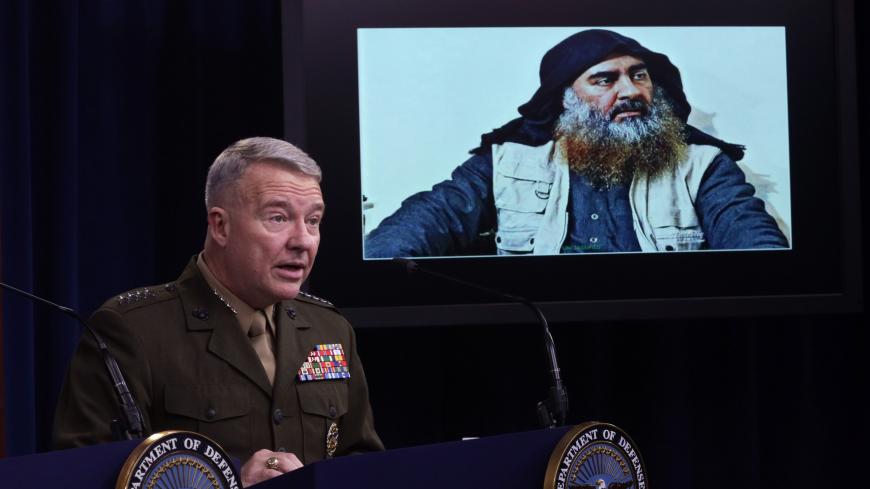 US Marine Corps Gen. Frank McKenzie, commander of the US Central Command, speaks as a picture of Islamic State leader Abu Bakr al-Baghdadi is seen during a press briefing on Oct. 30, 2019, at the Pentagon in Arlington, Virginia. Baghdadi was killed three days before in a US raid in Idlib province, Syria. - Photo by Alex Wong/Getty Images

The head of Syria’s Kurdish-led militias says he met today with the top commander of US forces in the Middle East, Gen. Frank McKenzie, in northeast Syria.

Mazlum Kobane, who leads the US-supported Syrian Democratic Forces in the fight against the Islamic State (IS), announced the meeting with the CENTCOM commander via Twitter.

A spokesperson for US Central Command declined to confirm or deny McKenzie’s visit, citing security concerns. Kobane, who also goes by the name Mazlum Abdi, said the two discussed their shared fight against IS and “achieving peace” in the region.

McKenzie met earlier this week with Iraqi Prime Minister Mustafa al-Kadhimi and Iraq's chief of defense in Baghdad to discuss the future of the US military presence in Iraq.

Why it matters: Today marks McKenzie’s second reported visit to northeast Syria’s autonomous region since assuming command of CENTCOM last year, and comes as the United States consolidates its military footprint in neighboring Iraq as Baghdad’s security forces show greater ability to manage the IS insurgency.

News of the meeting is also likely to rile NATO ally Turkey. Officials in Ankara have objected for years to US support for the local Kurdish-led fighters.

Turkey says the YPG, which forms the backbone of the Syrian Kurdish-led alliance, is a branch of the Kurdistan Workers Party (PKK), which Ankara, Washington, and their western allies consider a terrorist organization. News of McKenzie’s trip came as a reassurance amid continued fears in northeast Syria that Turkey may eventually expand its military presence in the area.

What’s Next: Some 600 US troops remain in Syria’s northeast, though how long they will remain is not clear. Pentagon officials have reported the SDF is increasingly able to combat IS on its own, but there is no political agreement in place to preserve the autonomous region. Both the regime of Syrian President Bashar al-Assad and the Turkish government say they will not tolerate the Kurdish-led autonomous region’s existence.

American officials have pushed for reconciliation between the Democratic Union Party (PYD), the political arm of the YPG, and rival Kurdish National Council. US officials apparently see a political agreement as a way to dilute the PYD’s dominance in northeast Syria in hope of alleviating Turkish pressure. Though tensions between Ankara and northeast Syria appear to have gone down since last year’s incursion, Turkey expanded a military operation against the PKK in northern Iraq last month.

Furthermore, Russia has been attempting to expand its footprint in northeast Syria, and may be seeking ways to pressure the SDF to make concessions.

US Marines recently thanked local Syrians for preventing Russian soldiers from establishing a position inside the American zone of operations. If the Russians can set up a base near Derik, they can pressure US supply lines and movement in the area.