CENTCOM: No sign of coronavirus in Syria’s IS prisons as riots raise concern

Gen. Kenneth “Frank” McKenzie, the top commander of American forces in the Middle East, said today that his command is concerned about recurring uprisings in prisons holding thousands of Islamic State detainees in northeast Syria. 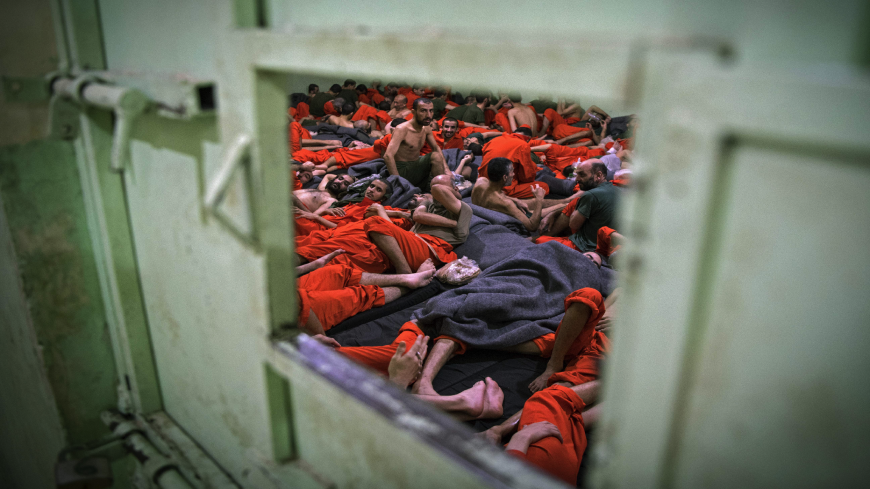 Men suspected of being affiliated with the Islamic State (IS) group gather in a prison cell in the northeastern Syrian city of Hasakah on Oct. 26, 2019. - FADEL SENNA/AFP via Getty Images

Gen. Kenneth “Frank” McKenzie, the top commander of American forces in the Middle East, said today that his command is concerned about recurring uprisings in prisons holding thousands of Islamic State detainees in northeast Syria.

McKenzie also said the United States is “absolutely” concerned about the coronavirus spreading in the prisons, though no signs of an outbreak have yet been detected.

“We believe the best way to reduce the population of those prisons, in all cases, is repatriation,” McKenzie told reporters in a conference call on Tuesday morning.

“We’re working with a variety of nations to achieve that goal. It’s a slow process, but we believe that’s the best path going forward,” the commander said.

McKenzie is currently on a tour of the Middle East and has met with regional officials, including Iraq’s Prime Minister Mustafa al-Kadhimi and Jordan’s King Abdullah II, over the past week. The general also visited northeast Syria, where he met with the commander of the Kurdish-led forces and al-Tanf garrison in southern Syria over the past week.

Backed by US Special Operations and the international coalition, Syria’s Kurdish-led Syrian Democratic Forces (SDF) captured and detained tens of thousands of suspected IS prisoners in the war against the extremist group in Syria.

Thousands of male IS suspects languish in makeshift prisons guarded by the Kurdish-led forces in Syria’s northeast, with an estimated 60,000 mostly women and children stuck in internment camps in the autonomous region.

The Kurdish-led autonomous administration has called for an international tribunal to try IS war criminals in northeast Syria, but to little avail.

The Trump administration has encouraged foreign governments to repatriate IS prisoners who originated from their countries. Pentagon and former administration officials have warned repeatedly that the IS suspects’ indefinite detention in Syria is unsustainable and the status quo risks further radicalization and breakouts.

The US-led coalition no longer directly supports the SDF’s prisons but will continue to “try to help the SDF indirectly in any way we can,” McKenzie said Tuesday.

IS prisoners broke down doors and escaped from their holding area during a riot in March at a major detention facility near the city of Hasakeh. Prisoners took control of parts of the ground floor of the same facility in May. SDF reinforcements were sent to the prison, and the US-led coalition assisted local forces in negotiating with the prisoners before order was restored.

A British IS suspected recently died at the Hasakah prison during the latest bout of unrest, the BBC reported Saturday.

More than 100 IS detainees escaped SDF detention last October when Turkey launched a military incursion against the Kurdish-led forces along Syria’s northeastern border, though some were recaptured, US officials have said.