Fears are rising in Syria's Kurdish-controlled northeast over a potential military incursion by Turkey. 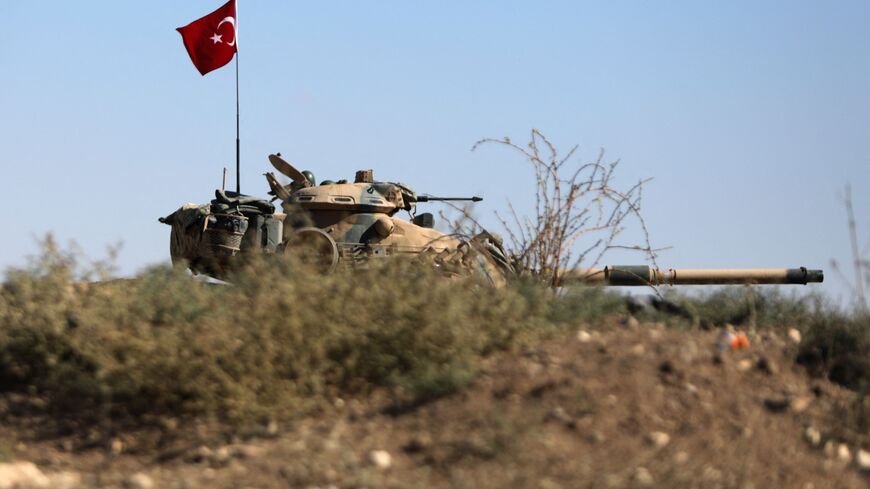 Turkish troops are pictured on the outskirts of the Syrian town of Afrin on October 19, 2022. - BAKR ALKASEM/AFP via Getty Images

Turkey launched airstrikes on Syria’s majority-Kurdish region on Saturday night in apparent retaliation for a bombing that struck a crowded market in Istanbul last week.

It was not immediately clear which sites were specifically targeted, nor how many people may have been hurt or wounded. A source on the ground in Derik told Al-Monitor that a local power station had been hit.

The Turkish defense ministry confirmed it carried out airstrikes in Syria and Iraq, but did not specify locations.

“Payback time! The scoundrels are being held to account for their treacherous attacks,” Turkey’s Ministry of National Defense wrote in a tweet featuring an image of an ascending fighter jet. “Terror nests are being destroyed with direct hits,” the ministry wrote.

A statement released by the defense ministry said “Operation Claw-Sword” aimed to “neutralize PKK/KCK/YPG and other terrorist elements [and] eliminate terrorist attacks on our people and security forces from northern Syria.”

The Turkish government has accused Syria’s Kurdish-led YPG of being behind last week’s bombing in a crowded Istanbul market. The blast killed at least six people and wounded more than 80 people in the city’s central Istiklal neighborhood.

Turkey’s Interior Minister Suleyman Soylu alleged that the suspected attacker, a Syrian national by the name of Ahlam Albashir, had been acting under the instruction of YPG leadership in Kobani, Syria.

The YPG and the PKK have flatly denied any responsibility for the attack, which remains under investigation by Turkish authorities. Turkey holds Syria’s YPG to be inextricable from the PKK, whose leadership resides in northern Iraq and is designated a terrorist organization by Turkey and its Western allies for its four-decade insurgency against the Turkish government.

In response to the airstrikes, Mazlum Abdi, the Kurdish commander of the US-backed alliance of militias in Syria known as the Syrian Democratic Forces (SDF), called on residents of the region to remain in their homes.

“We are making every effort to avoid a major catastrophe. If war erupts, all will be effected,” Mazlum wrote, adding, “The attacks will not be limited to our regions, which are now being subjected to aggressive and barbaric bombing.”

Some 900 US troops remain on the ground in Syria, most of them in support of the SDF in the fight against the Islamic State (IS).

Washington swiftly offered condolences for the victims of the Istanbul attack, a statement which Turkish Interior Minister Soylu likened to “a murder being the first to return to the scene of the crime.”

A regional official with Turkey’s far-right Nationalist Movement Party (MHP) was questioned last week by Turkish police over alleged phone contact with the main suspect in the bombing.

The official, Mehmet Emin Ilhan, later said his phone line had been obtained illicitly by someone in possession of a photocopy of his government-issued identification – a common petty offense in Turkey.

The strikes are raising fears in northeast Syria as to a possible renewal of Turkish ground offensive against the YPG.

Ankara has launched three prior assaults into Syria's northeast, seeking to push the YPG away from its border citing domestic security threats. Hundreds of thousands of Syrian civilians have been displaced by Turkey's prior incursions, which have employed Syrian mercenaries accused of war crimes.

The YPG has long insisted it poses no threat to Turkey, and that it aims only to protect the multiethnic communities under its control in the wake of the war against IS.

Behind closed doors, US officials have warned Turkish counterparts about the danger of a renewed offensive, citing the presence of some 10,000 imprisoned IS fighters in makeshift jails across Syria's Kurdish-controlled region.