Turkish security forces have arrested a Syrian woman they say confessed to carrying out the attack under instructions from Kobani, but both the Kurdistan Workers Party and Syrian Kurdish forces deny any involvement. 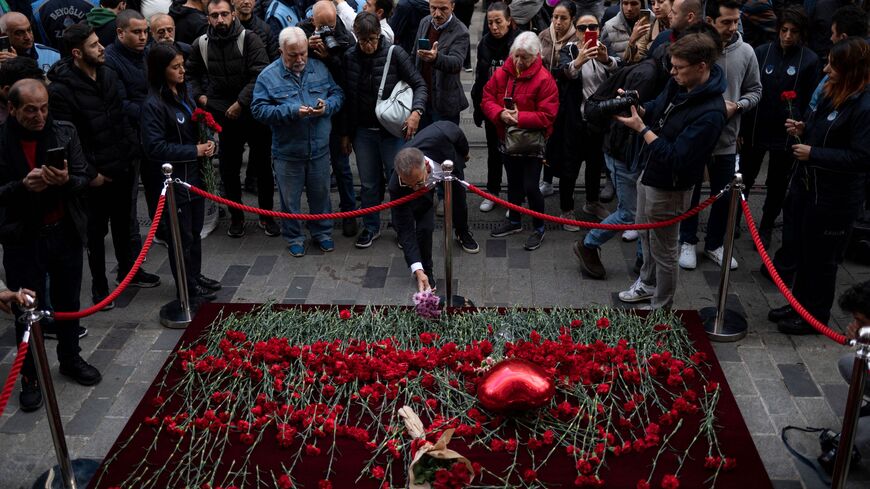 A mourner lays flowers down as people grieve the victims of the Nov. 13 explosion on the busy shopping street of Istiklal in Istanbul on Nov. 14, 2022. - YASIN AKGUL/AFP via Getty Images

Ankara pointed the finger at the outlawed Kurdistan Workers Party (PKK) and its Syrian offshoot as the hand behind Sunday’s bomb attack in a bustling pedestrian street in central Istanbul that killed at least six people and wounded 80.

“Our assessment is that the order for the deadly terror attack came from Ayn al-Arab [Kobani, a Kurdish-majority city in northern Syria], where the PKK/YPG has its Syrian headquarters,” Suleyman Soylu, Turkey’s iron-fisted interior minister, said early Monday. YPG refers to the People’s Protection Units, the military wing of Syria’s Kurdish Democratic Union Party (PYD). Turkey considers both the YPG and PYD terrorist groups and repeatedly urges its allies to sever ties with both.

Within hours of Soylu’s initial statement, the Istanbul police released footage of a house raid carried out in the early hours of Monday and announced that they had arrested a Syrian woman, Ahlam Albashir, who admitted to planting the bomb.

“The person has admitted during the interrogation that she was trained as a special intelligence officer by the PKK/PYD/YPG terrorist organization. She entered [Turkey] illegally through Afrin for the attack,” read the statement, accompanied by a photo of a young woman in a purple T-shirt and with a swollen face. “She said that she planted the bomb at 16:20 in line with the instructions she received from the PKK/PYD/YPG terrorist organization's headquarters in Kobani and fled.”

The PKK, which is on the terrorist list of the United States and the European Union, denied that it was behind the attack. "Our people and the democratic public know we are not related to this incident. We will not directly target civilians and we do not accept actions targeting civilians," the group said in a statement published by the Firat news agency.

Mazloum Kobane, the commander of the Kurdish-led Syrian Democratic Forces, also said that his forces had nothing to do with the Istanbul bombing and “rejected the allegations” accusing them.

Reuters quoted an unnamed source as saying that the Islamic State (IS), which staged several bombings in Turkey between 2015 and 2017, was “not entirely disregarded.”

The Istanbul Security Department’s statement said that the security forces searched for the bomber by watching footage from 1,200 cameras, carrying out 21 house raids simultaneously and arresting 46 people suspected of links to the bombing.

“They were planning to escape to Greece if we had not caught them,” Soylu said as he arrived at the scene of the bombing that shook the cultural and commercial center of the cosmopolis of 18 million.

Sunday’s blast occurred on Istiklal Street, a stone’s throw from the consulates of Russia, the Netherlands and others. A pedestrian street lined with shops, restaurants and art galleries, Istiklal — described by American author Stephen Kinzer as the “pulsating heart of the Turkish nation” — is crowded day and night with locals and international tourists. On Nov. 13, many soccer fans were in the area because premier-league team Besiktas was scheduled to play nearby.

On Monday, Istiklal was lined with Turkish flags and a small memorial was established where people placed red carnations for the victims. Turkey’s opposition leaders condemned what they called a “treacherous attack.”

The popular area has been targeted several times in terrorist attacks by the PKK and jihadists linked to IS, which ruled a so-called caliphate in Syria and Iraq until early 2019. In March 2016, a suicide bomber from IS killed six people, including American-Israeli tourists, and wounded dozens. Six months later, some 44 people died in twin explosions that rocked nearby Besiktas. They were claimed by the Kurdistan Freedom Falcons, the urban terror offshoot of the PKK. Then, in the early hours of 2017, an IS militant attacked the posh Reina nightclub nearby, killing 39 people from 14 different countries.

For many Turks, the attack was a throwback to the turbulent 2015-2017 period, when bombs rocked the country from the border town of Suruc to the capital Ankara, the scene of one of the deadliest attacks in the country in the 21st century.

“Is it the same scenario?” asked veteran journalist and author Murat Yetkin in a video posted today. Yetkin said that as Turkey reached the last cycle before presidential and parliamentary elections next year, large sections of Turkish society voiced demands for better economic conditions, an independent judiciary and the rights to education and freedom of expression. “Driving the electorate to security concerns would only serve the interests of those who do not want … a secular and social state of law and pluralist democracy in Turkey,” he opined.

“The task of the government is to provide an environment where the citizens can vote in security and freedom, not instilling fear in the hearts of the citizens and hope that this fear will encourage them to vote for the government,” Yetkin added.

Arriving at the memorial in Istiklal, Soylu criticized what he called American support for the PKK and YPG. “We do not accept the condolences from the embassy of the United States,” he said. Claiming that those who pulled the trigger were “mere pawns,” he said that Turkey’s alliance with a country that fed and financed “terrorist zones in Kobani” that target Turkey’s stability “needed to be discussed.”

Soylu has pointed his finger at Washington before. Following an attack against a police station in Mersin a month ago, Soylu said that the attack was clearly “US-based.”

A State Department spokesperson said that the US "rejects" and "is deeply disappointed" by any irresponsible comments to suggest that it had any role or responsibility in this despicable attack on Turkish citizens. "We stand ready to assist the Turkish authorities in their investigation," the spokesperson said, stressing Washington unequivocally condemns terrorism in all its forms and that stands in solidarity with Turkey, its "valued NATO ally."

Washington was among the capitals that offered their condolences to Ankara after the attack. "The United States strongly condemns the act of violence that took place today in Istanbul,” White House Press Secretary Karine Jean-Pierre said Sunday. “We stand shoulder to shoulder with our NATO ally Türkiye in countering terrorism.”

Sweden’s new Prime Minister Ulf Kristersson, who arrived in Ankara last week to persuade President Recep Tayyip Erdogan that his government would step up efforts to fight terrorism and maintain distance from the YPG, also sent an immediate statement. “We stand with Türkiye,” he tweeted.

Condolences included Russian President Vladimir Putin’s offer of cooperation against terrorism and French President Emmanuel Macron’s tweet in Turkish as well as an almost immediate message from Hamas, which “vehemently denounced” the attack and expressed “full brotherly solidarity” with the people of Turkey.

Israel, which is taking cautious steps toward normalization with Turkey, also made a statement. “I extend our deepest sympathies to our Turkish friends and the victims' families. The whole world must stand united and firm against terror,” Israeli President Isaac Herzog said late Sunday.

NATO Secretary-General Jens Stoltenberg tweeted, “Shocking images from Istanbul. My thoughts and deepest condolences to all those affected & to the Turkish people. NATO stands in solidarity with our ally Türkiye.”

Yetkin commented in this video, “Sadly, we now have the added concern that the government may impose restrictions on the freedom of communication before and during the elections.”