Istanbul bomb attack could have repercussions in international arena

Turkey lashes out at ‘insincerity’ of US condolences for an attack targeting a crowded street after claiming that the Syrian ‘branch’ of the PKK ordered it. 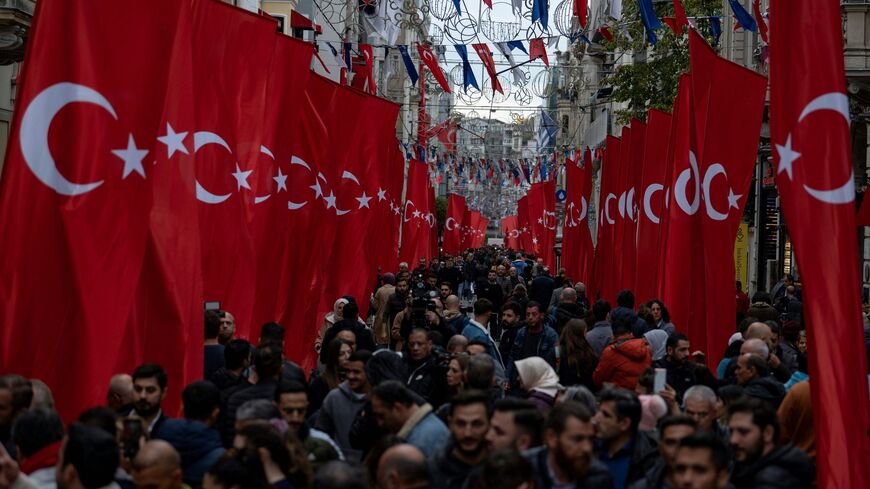 Pedestrians walk through Istiklal Ave. in Istanbul on Nov. 14, 2022, one day after a bomb killed six people in the busy central shopping street of the Turkish capital. - YASIN AKGUL/AFP via Getty Images

ISTANBUL — The calm of a sunny afternoon on the most popular pedestrian thoroughfare in Turkey’s commercial and tourism capital was shattered by a blast on Sunday, while tensions rise at the diplomatic level due to those believed responsible for the killings.

Multiple bodies were lying on the ground after the explosion. The toll later announced by the government was six dead including two children, one of them a 3-year-old girl. Over 80 people were injured, some seriously so.

CCTV footage appeared to show that the blast was caused by a bag filled with explosive material and left on a bench. A woman had reportedly sat on the bench for over 40 minutes and then left shortly before it blew up.

Police immediately began cordoning off the surrounding area as ambulance sirens squealed and a low-flying helicopter looped overhead, as witnessed by Al-Monitor on the ground near and on the street.

Istiklal Avenue, where the attack took place, has many shops, restaurants and places of worship including multiple churches, mosques and several foreign consulates. It is located at the highest altitude in this area on the European side of the city. Street musicians ply their trade nightly along the street, and many shops and restaurants on it are owned by Turks of varying ethnicities.

Groups of men not in any sort of official uniform began in the immediate aftermath to cut off access for vehicles to other streets leading up toward the street, looking around warily. Both male and female police meanwhile cleared the street itself and ordered reporters to stay at a distance from the site of the attack, possibly out of concerns of a secondary attack.

Later in the night, access to the surrounding streets was still blocked but now manned by additional traffic police sent in.

Ramifications for Sunday’s attack in central Istanbul may echo in the chambers of international diplomacy given Turkey’s announcement of the arrest of a Syrian woman from an area under the US-backed, Kurdish-led Syrian Democratic Forces (SDF).

However, no group has claimed responsibility for the blast so far, and the Kurdistan Workers Party (PKK) and SDF explicitly denied involvement.

The PKK is designated a terrorist organization by Turkey, the United States and the EU. Most of the commanders are Turkish nationals who have lived abroad for many years and are wanted by authorities.

Turkish officials said that the woman confessed to being trained as an intelligence operative by the US-supported People's Defense Units (YPG), Turkish media reported during the night between Sunday and Monday.

Turkey uses the term "PKK" to refer to the YPG as well.

"The person who planted the bomb has been arrested," Interior Minister Suleyman Soylu said in a statement, noting that another 21 suspects had been arrested as well.

“Our assessment is that the order for the deadly terror attack came from Ayn al-Arab (also known as Kobane) in northern Syria, where the PKK/YPG has its Syrian headquarters,” Soylu was quoted as saying by Turkey’s official news agency Anadolu.

“We will retaliate against those who are responsible for this heinous terror attack,” he vowed. In response to condolences sent by the United States, he was quoted by Turkish media as saying, “I believe the support of our so-called allies to terrorists, by hiding them in their countries or giving them a lifeline in the areas they occupied, funding them through decisions of their senate is obvious; this is blatant insincerity.”

Soylu also said that the suspect was ordered to be killed after conducting the attack by the organizers of the attack in a bid to prevent Turkish authorities from establishing the network behind it.

A video released of the arrest operation of the woman showed security officials finding large amounts of cash and some weapons and ammunition as well as the clothes she was wearing in the video at the time of the attack.

Turkish authorities said as of Monday that investigations are ongoing.