Turkey is seeking to downplay the jihadi threat that its troops face in Idlib, the last Islamist stronghold in Syria, opting to turn the spotlight to the Kurds instead. 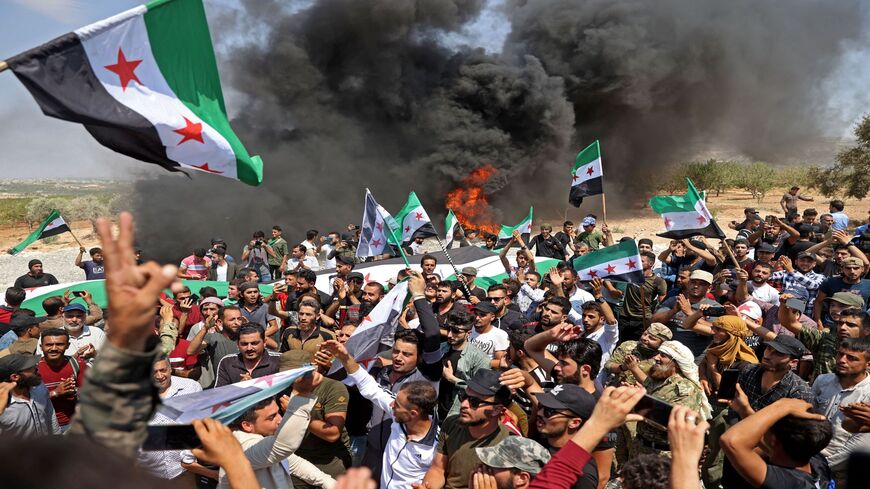 Syrians lift the opposition flag and burn tires as they rally in front of a Turkish military outpost to protest Ankara's perceived inaction over the latest Syrian regime attacks, in the rebel-held northwestern Idlib province, on July 23, 2021. - OMAR HAJ KADOUR/AFP via Getty Images

After losing three soldiers in a bomb attack in Idlib, the last bastion of Islamist rebels in Syria, Turkey pounded Syrian Kurdish targets last week, sending a misleading message of revenge to its public. The episode underscores Ankara’s growing predicament in Idlib, where jihadi forces target Turkish troops even as Turkey’s military presence shields them against the Syrian army.

In Idlib, Turkey has sought to use the dominant Hayat Tahrir al-Sham (HTS) group to suppress smaller jihadi groups, eager to create the impression that terrorist groups are being eliminated in the region, as its deals with Russia require. Meanwhile, it has kept reorganizing its allies from the Syrian National Army, an umbrella group for various opposition forces. Ultimately, all those efforts have been aimed at preventing a fresh Syrian-Russian offensive to retake the region. This calculus seems to be failing, and tensions in Idlib are on the rise.

Turkey’s predicaments stem from several fronts. Its military and intelligence have sought to create a regular army out of the armed opposition groups that have backed Turkish forces in the regions seized  in northern Syria. The Syrian National Army, proclaimed in October 2019, was an outcome of those efforts. Yet factions in that setup have continued to act autonomously, clash with each other, and commit crimes against local civilians.

In a bid to keep those factions under control, a new grouping, called the Syrian Liberation Front, was created last week under the umbrella of the Syrian National Army. The five groups involved — the Sultan Suleyman Shah Division, the Hamza Division, the Mutasim Division, the 20th Division and Sukur al-Shimal — had formed a joint operation room in July, but it was soon marred by disagreements. But no matter how the factions are reorganized, they stand no chance of evolving into a regular army. Many of them have turned into war profiteers, and their rivalries and internal divisions have persisted, as in the case of Ahrar al-Sham, one of the groups on which Turkey had counted the most.

Turkey’s bonds with the political wing of the opposition pose another predicament. Ankara has maintained support for the self-styled Syrian interim government, even though it wields little influence on the ground. Nevertheless, a pro-government Turkish daily claimed in early September that the Turkish and Syrian intelligence chiefs would meet in Baghdad. Though Damascus denied the report, it came off as a sign of Turkish desire for dialogue. Several days later, Turkish Foreign Minister Mevlut Cavusoglu met with senior Syrian opposition figures and asserted “full support” for the interim government and its affiliate, the National Coalition for Syrian Revolutionary and Opposition Forces, calling them “the legitimate representatives of the Syrian people.”

Ostensibly, Ankara’s willingness to open a communication channel with Damascus without ending its support for opposition groups reflects its desire for limited collaboration — against the Kurdish drive for autonomy. Such a contradictory policy is unlikely to impress Damascus.

In Idlib, meanwhile, Turkey’s posture has favored HTS, even though the jihadi outfit has been designated as a terrorist group by Ankara and expelled Turkish-backed factions from the region. HTS has disowned its links to al-Qaeda, hoping to earn recognition as a mainstream opposition actor. Turkey hopes that HTS will eliminate other jihadi factions and rebrand itself as a “moderate” group. Yet the jihadi potential in Idlib persists, and HTS remains far from being removed from blacklists. Moreover, attacks on Turkish forces have continued in the region.

The most recent attack, in which three Turkish soldiers were killed, took place near Binnish on Sept. 11. It was claimed by the Ansar Abu Bakr Al-Siddiq Brigade, an obscure group that was behind four other attacks on Turkish forces in the past 12 months. Whether the group is a front for HTS or rival jihadis remains a mystery. Another mysterious group in the region is Khattab al-Shishani, which claimed three attacks on joint Turkish-Russian patrols in July and August last year.

Turkey has a rather strong intelligence network in the region, but instead of focusing on those groups in Idlib, it has sought to divert attention to the Syrian Kurds. After the attack near Binnish, Turkish forces and allied militia shelled areas where Kurdish forces are present. “Our martyrs have been avenged,” Defense Minister Hulusi Akar said as he visited military units at the border with Syria after the attack. Such messages serve to create a misleading appearance of score-settling, with the government reluctant to name the assailants when the attacks come from Islamist groups.

Ankara has assumed that HTS’ suppression of other jihadis would fulfill its commitments to Russia to eliminate terrorist groups. Yet HTS has reinforced its de facto emirate in Idlib, and dozens of radical groups such as Ansar al-Islam, Ansar al-Tawhid, Ansar al-Din, Ajnad al-Kavkaz and the Turkistan Islamic Movement have maintained their presence in the province. Hurras al-Din, the umbrella group of al-Qaeda-inspired factions, has ostensibly disintegrated, but the factions have not left the region. Similarly, HTS’ move to dissolve the Chechen-led Jund al-Sham does not mean the group has been eliminated.

As a result, two key requirements of the March 2020 Moscow deal between Turkey and Russia – reopening the M4 highway and creating a security belt extending to 6 kilometers on either side of the route – have remained unfulfilled, and rebel groups have continued to attack government-controlled areas, benefitting from Turkish military positions as a shield. Russian Foreign Minister Sergey Lavrov reminded Ankara of its commitments Sept. 9, stressing that bilateral deals “provide for the separation of the normal, reasonable opposition from the terrorists, primarily from Hayat Tahrir al-Sham.” This process, he said, was started but is “far from being completed.”

This state of affairs has given Russia room to pressure Turkey and justify military operations. Russian-Syrian operations have markedly intensified since June. In recent days, Russian warplanes have pounded targets in Deir Sunbul and Jabal al-Zawiya in southern Idlib, including a site close to Turkish military positions, as well as Sheikh Suleiman and Darat Izza in the western countryside of Aleppo. The Syrian army, meanwhile, has shelled areas to the northwest of Hama and in the southern countryside of Idlib.

Idlib was certainly high on the agenda when Russian President Vladimir Putin hosted his Syrian counterpart Bashar al-Assad in Moscow Sept. 14. Putin said at the meeting that the main problem in Syria today was the presence of foreign forces without permission or a UN mandate – a reference to Turkey and the United States.

Nevertheless, Brett McGurk, the White House’s Middle East coordinator, has been holding talks with Russia’s deputy foreign minister Sergey Vershinin and special Syria envoy Alexander Lavrentiev, which might weaken Turkey’s hand in Syria. The US-Russian dialogue might help spur serious negotiations between Damascus and the Kurds, which in turn might diminish the Turkish military presence east of the Euphrates River. The Biden administration has effectively relaxed the Caesar Act sanctions on Syria by overlooking Iranian oil tankers entering the Syrian port of Tartus and the flow of Egyptian gas and Jordanian electricity to Lebanon via Syria. These signs of improved US-Russian dialogue would leave little room for Ankara, whose anti-Kurdish policy has been compounded by drone assassinations recently.

In sum, Turkey is headed for uneasy days in Idlib, where dozens of Turkish military outposts are now dotting the periphery of the region. If the US-Russian dialogue leads to a compromise on the Kurdish-held areas to the east of the Euphrates, a showdown in Idlib will become inevitable.