The Syrian military has launched a new ground offensive in south Idlib to take control of the key M4 highway and says it is making major gains against the opposition. 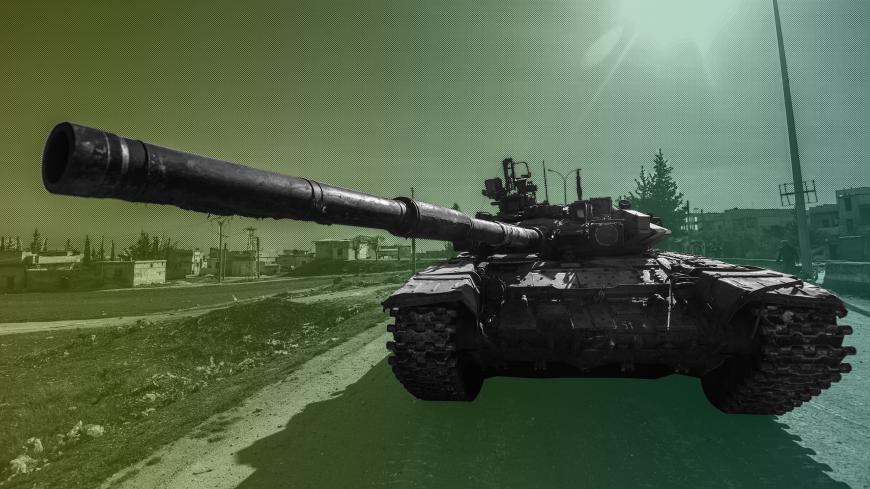 ALEPPO — Syrian rebels backed by Turkey claim to have retaken the key town of Saraqeb in northwestern Idlib province today in what would be a major blow to Damascus following the government forces' latest offensive on the last rebel-held territory in the country.

A Russian military source denied the rebels' claims and said the Syrian government forces had repelled the attack.

During the latest round of military operations, launched Feb. 23 in south Idlib, Syrian government forces and their allied Iranian fighters made significant progress. Most importantly, they had seized Saraqeb and advanced toward the Jabal Zawiya area, which includes dozens of villages and towns under opposition control. The operation's later stages aim to reach the strategic M4 highway that connects Aleppo to the port town of Latakia.

On Feb. 26, the regime forces took control of 16 villages and towns in the southern countryside of Idlib, the most important being the town of Kafr Nabl. The regime’s ground offensive is backed by heavy air and ground shelling targeting opposition sites in towns near the front lines. Shelling also hit the Jabal Zawiya area and Idlib city, in addition to a number of densely populated towns, causing many civilian casualties.

Due to the regime forces’ bombardment of schools in Idlib, the Directorate of Education suspended classes and work in its offices. The shelling also displaced thousands of civilians from southern Idlib who were pursued by Russian and regime aircraft, targeting their cars on the roadways. The aerial shelling prevented ambulances from reaching bomb sites while aircraft targeted medical facilities including the Idlib Central Hospital on Feb. 25. The ongoing air and ground shelling accompanying the ground offensive threatens the lives of hundreds of thousands of civilians.

The government forces made such rapid progress in the first days of the military operation that the opposition in Idlib questioned its defenses. While some attributed the regime's speed to the scorched-earth policy of Assad's forces and their allies, others believe that the opposition is not showing genuine resistance and that what is happening is the implementation of Russian-Turkish understandings.

Journalist Muddar Abu Mustafa, who works with local media sites in the Idlib countryside, told Al-Monitor, “Russian forces are leading the new round of the military operation in southern Idlib. They have provided the regime forces with numerous military munitions so they can continue with their scorched-earth policy and take control of the Jabal Zawiya area and reach the M4 highway, even if the price is to displace residents and completely destroy the areas.”

He added, “Syrian and Russian aircraft used many types of powerful explosives during their raids on Jabal Zawiya, including vacuum and cluster bombs. The area targeted by the ground attack has been hit by hundreds of airstrikes, and the regime forces intensively use artillery and rockets. The opposition was often forced to withdraw from its positions due to intense shelling.”

Abu Mustafa explained, “Russian reconnaissance planes frequently fly above the military operations area in southern Idlib and monitor the movements of the opposition. They provide the regime forces with coordinates to fire rockets as well as detailed information for aircraft to reach farther and more fortified targets.”

Photojournalist Abdel Fattah al-Hussein, who works with Thiqa News Agency in Idlib and its countryside, told Al-Monitor, “The bombing of the opposition sites and the positions of their fighters near the fighting fronts caused great losses in their ranks and prevented them from moving easily. The shelling also damaged and destroyed a large number of opposition weapons after they were detected during battle by Russian aircraft.”

On Feb. 26, while the opposition was losing its positions to the regime forces in southern Idlib, it launched another operation on the eastern Idlib front. The rebels targeted the Saraqeb region — located on the M5 roadway connecting Aleppo to Hamas, Homs and Damascus — and reportedly took control of three villages as well as Saraqeb on the dawn of Feb. 27 after having lost the city to the regime on Feb. 6.

Ghassan al-Hamawi, a civil activist in Idlib countryside, told Al-Monitor, “The opposition’s attack on Saraqeb with the support of the Turkish army and its negligence in defending the southern Idlib countryside seemed intentional. It does not seem logical that the opposition is opening a new battle [front] against the regime forces while it is facing losses in southern Idlib. What is happening is the implementation of the Sochi Agreement in one way or another.”

He added, “What is happening aims to establish the demilitarized buffer zone by force under tacit Turkish approval. What is going on in southern Idlib and Jabal Zawiya as well as the M4 highway is the result of international understandings implemented by faction leaders such as the head of Hayat Tahrir al-Sham, Abu Mohammed al-Golani.”

Hamawi noted, “I think that the next stage is the withdrawal of the regime forces beyond the Turkish control points after they finish their mission and reach the M4 highway. This will be followed by Russian-Turkish patrols in the de-escalation area around Idlib and then facilitating the return of the displaced people to their areas, while the opposition will have control of an area north of Idlib.”

Meanwhile, Yahya Mayo, the media coordinator of the National Army of the Free Syrian Army, told Al-Monitor, “Occupying fighting axes in eastern Idlib and regaining Saraqeb was … an attempt to disperse the regime forces and their allies and obstruct their progress in Jabal Zawiya.”

Escalation between the regime forces and the opposition is ongoing. Turkey gave the regime until the end of February to withdraw from the area, but the regime could well continue to advance toward the M4 highway instead.