Battle for Idlib draws near as sides take position 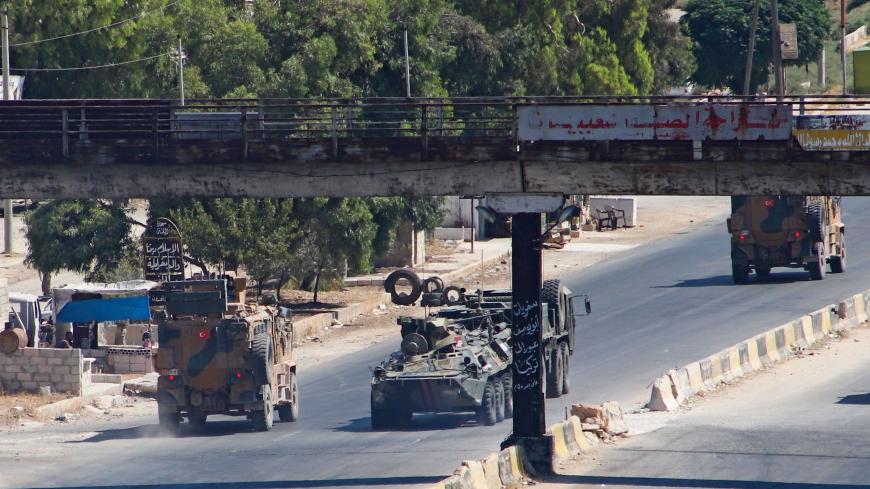 A Turkish-Russian military convoy tows a damaged vehicle after its joint patrol was reportedly targeted on the strategic M4 highway, near the Syrian town of Urum al-Jawz in the south of the northwestern Idlib province, on Aug. 25, 2020. - ABDULAZIZ KETAZ/AFP via Getty Images

On Aug. 18, three Russian jets conducted 12 air raids using thermobaric missiles on the outskirts of the Harbanoush and Kokania villages to the west of the villages of Maarat al-Sin and al-Sheikh Bahr as well as al-Salama camp in western Idlib.

The airstrikes came in spite of a March 5 agreement between Turkish President Recep Tayyib Erdogan and his counterpart Russian President Vladimir Putin to establish a security corridor around the strategic M4 highway connecting Aleppo and Latakia provinces.

The Syrian Observatory for Human Rights reported Aug. 2 that the regime forces had brought in new military reinforcements in the Idlib countryside, suggesting that the Syrian regime was preparing for a possible battle in the area. In an Aug. 12 speech before the People’s Council, Syrian President Bashar al-Assad vowed to “liberate the remaining lands to preserve the unity of our land and ensure our people’s protection.”

The Russian raids prompted the Turkish army to reinforce its positions in the Idlib countryside.

Naji Abu Hudhayfah, spokesperson for the opposition-affiliated National Liberation Front, told Al-Monitor that ever since the cease-fire declared by Erdogan and Putin March 5, “the [opposition] factions have been preparing for a possible battle the regime and Russia might wage [in Idlib] because of their mistrust in their promises. We are training fighters and improving their fighting abilities, in addition to enhancing expertise and capitalizing on experience from previous battles. We have prepared special units that can face the scorched-earth tactics and heavy air shelling adopted by Russia.”

He noted that the regime has been recently trying to infiltrate the ranks of factions in the Latakia countryside and the Jabal al-Zawiya areas of Deir Sunbul, Fatira and Fleifel.

He added that the forces are engaged in "intensive military training" to avoid repeating their swift defeats by the regime in the battles for Aleppo's western countryside and eastern and southern Idlib at the end of 2019 and early 2020.

“We beefed up coordination between factions through Al-Fateh al-Mubin operations room, and we are coordinating the factions to work together against the regime forces,” he added.

Al-Monitor met in the Idlib countryside with Abu Khalid al-Shami, a military spokesperson for Hayat Tahrir al-Sham, which the United States considers a terrorist organization.

Shami said, “Military preparations never end and always need development. At Al-Fateh al-Mubin operations room, we examined past obstacles and expected scenarios, and we worked on increasing readiness and strength by building more [training] camps and increasing weapons training. We also boosted military reinforcements along the front line with Assad’s militias. The militias of Assad, Russia and Iran are mobilizing their forces on many fronts, mainly the Latakia countryside and in the south and east Idlib countrysides.”

He added, “The joint work carried out as part of Al-Fateh al-Mubin operations room is always improving, and this progress is clear to anyone who visits the fronts. But showing the reinforcements and preparations via the media might jeopardize the security of the military work. Therefore, we do not encourage mentioning this in the media.”

Khalid Kutayni, a Free Syrian Army leader from the Hama countryside who resides in Turkey, told Al-Monitor, “If the regime does not abide by the agreement signed March 5 and tries to advance to control the M4 highway, where Russian and Turkish patrols are deployed, Turkey will implement plans B and C, which the Turkish minister of defense had drafted before the March 5 agreement. The most likely option is that Turkey and the Syrian opposition factions will [be ready to fight] the regime forces to push them to retreat from the areas they gained control over recently.”

He added, “Although Russia has thus far fully backed Assad’s policies, it will reassess the situation amid the constant Turkish warnings to the regime not to get near the Turkish army locations in Idlib. Russia is concerned about losing Turkey, since the two countries share strategic interests. Although the Libyan affair does not affect the Idlib issue, it influences Turkish-Russian relations. Turkey will not agree to barter for Idlib in exchange for the Libyan key city of Sirte). We have heard claims that Turkey would be allowed to take control of Sirte if Turkey allows Russia to control Idlib, but this is not true.”

Turkey and Qatar are supporting Libya’s internationally recognized Government of National Accord based in Tripoli. In recent months, forces loyal to the GNA managed to take control of several areas around Tripoli, including al-Watiya airbase that was under the control of forces loyal to eastern military commander Khalifa Hifter, who is backed by Egypt, Saudi Arabia and the United Arab Emirates. In light of these advances, the GNA has been eying the key city of Sirte and recently announced preparations to expel Hifter’s forces and seize the city.

Majd Kilany, a researcher at Jusoor Center for Studies in Idlib, told Al-Monitor, “Russian forces often wage similar raids to create pressure or to send messages as part of its negotiation track with Turkey, which is not limited to understandings over Idlib, but also [concerns] various areas, including in Libya. Meanwhile Iranian and Syrian forces that are managed by Iran and Russia are sporadically clashing with the factions. The indiscriminate shelling is intended to drain the area and drowning it in the ongoing chaos, in addition to sending warnings and threats to opposition factions.”

He said, “The regime is sending military reinforcements to the coastal front [the Latakia countryside], specifically the Kabina axis, where Russian forces are still creating opportunities to secure their presence on the Syrian coast.”

He added, “The decision to fight in northwest Syria has become a political rather than military one. The main factors at play are the regional and international players who make the political decisions on the negotiating table. Based on political considerations, it is unlikely that wide breaches in the March 5 Russian-Turkish agreement will take place or that it will collapse. The return of joint patrols on the M4 highway is an important indicator that both sides want to maintain the map of the area and uphold the cease-fire.”