The Syrian regime and opposition factions are racing for military control on the ground in Idlib, while Turkish President Recep Tayyip Erdogan and Russian President Vladimir Putin met in Moscow to discuss a cease-fire. 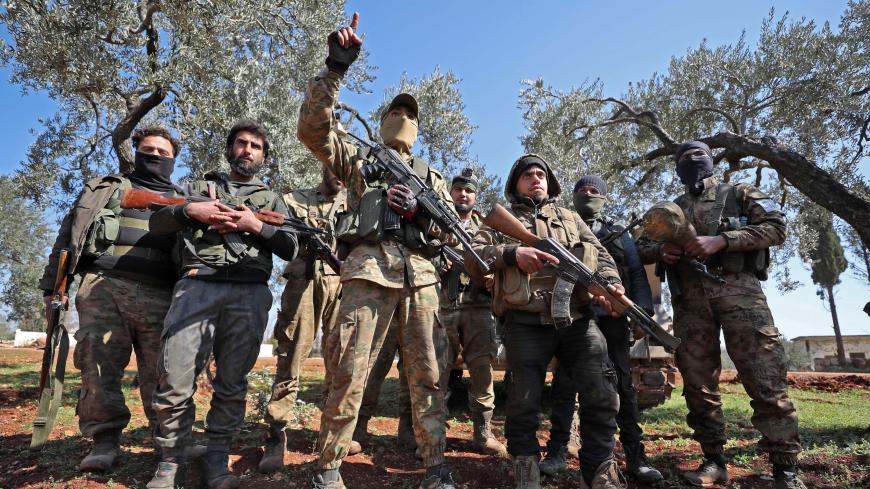 IDLIB, Syria — Turkish President Recep Tayyip Erdogan and his Russian counterpart Vladimir Putin announced a cease-fire in the Syrian province of Idlib after six hours of talks in Moscow today. Speaking from the Kremlin, Putin acknowledged disagreements with the Turkish leader, yet expressed hope the deal would be a "good basis for ending the fighting” in northwest Syria.

The deal comes after fighting intensified with the January launch of a Russia-backed offensive by Damascus to retake the territory from opposition fighters supported by Turkey. In late February, Ankara was drawn further into the conflict, when Feb. 27 airstrikes killed at least 33 Turkish soldiers in Idlib and days later Ankara launched Operation Spring Shield against Syrian forces.

The opposition has been losing one town after another since the Syrian regime forces launched Jan. 16 their ground offensive in Idlib and in the adjacent countryside. The total surface area the opposition lost until Feb. 26 hit 1,890 square kilometers (730 square miles).

The Turkish drones are relentlessly shelling the regime forces’ military vehicles, gun emplacements, supply convoys and army command posts in Idlib. Turkey even targeted positions outside Idlib, such as the shelling March 1 of Hama Military Airport.

Although Damascus has remained relatively silent on the size of its losses — rarely noting deaths, and underestimating figures when it does — the Turkish Defense Ministry posted footage claiming to depict shelling on the Syrian regime’s vehicles and convoys.

News circulated on social media Feb. 28 that Turkish airstrikes had killed four senior officers in the regime forces. Moreover, sources close to Lebanon’s Hezbollah said March 1 that nine of its members were killed and others were wounded in Turkish airstrikes west of Aleppo.

The Turkish drones did not only prevent the regime from making any advances in Idlib, but also caused confusion within its ranks. This is because the regime forces have not adapted yet to the military changes, particularly since the general atmosphere proved a decisive factor serving them in their war against the opposition in the past.

Meanwhile, the Syrian opposition is set out to take back control on three main fronts. In the Jabal al-Zawiya area in southern Idlib, the opposition factions managed to seize control on Feb. 29 and March 1 of more than 16 towns and villages it had lost in the past days, namely, the towns of Kafr Aweid, Hizareen and al-Dar al-Kabirah.

The fiercest clashes, however, have been taking place in the city of Saraqeb, in eastern Idlib, where hit-and-run battles continue between the armed opposition and the regime forces, backed by their Iranian fighters.

Damascus is well aware that unless the Syrian airspace is cleared from Turkish warplanes, it would be difficult for the regime’s army to maintain control on the ground.

On the way to the city of Saraqeb, 16 kilometers (10 miles) east of Idlib, on Feb. 29, the rising plume of black smoke was seen engulfing the city. The Russian warplane bombed the city with two airstrikes, and the neighboring towns of Sarmin and Qmenas were also hit by several raids.

This Al-Monitor reporter could hear the sounds of explosions when approaching the city. Fighters of the Free Syrian Army’s Syrian National Army said that entering the city was extremely dangerous, as heavy clashes were ongoing between the opposition factions and the regime’s forces.

On Feb. 27, the Syrian opposition regained control of the strategic town of Saraqeb and five neighboring towns.

“The situation in Syria’s Idlib is [now] in favor of Turkey,” Erdogan said on the eve of the opposition’s takeover of the city.

However, success did not last for the opposition. On March 2, Syrian regime forces retook control of Saraqeb after a fierce attack backed by heavy Russian airstrikes.

Opposition sources told Al-Monitor on March 4 that regime forces indeed seized Saraqeb, saying that opposition fighters were forced to withdraw from the city after coming under fierce attacks.

Since losing Saraqeb, the opposition forces have continued their attacks against the city and neighboring towns to retake it. But the mission seems difficult since Russian military police deployed in the city on March 2.

The opposition is hoping to regain Saraqeb, with the aim to stop the regime advances toward taking the M5 highway that connects Aleppo to Damascus, and prevent it from reaching Idlib city.

In addition, Ankara views Saraqeb as a strong card to be used in the negotiations with Moscow, should the Turkish-backed rebels regain control of it.

Ahmad Rahal, a political analyst and defected general from the Syrian army, told Al-Monitor, “The regime’s attack on Saraqeb was expected given the city’s strategic importance. When opposition forces seized the city on March 27, it dealt a heavy blow to the regime and its allies, and the Turkish soldiers’ attack came to support the opposition in regaining the city.”

The Syrian opposition and the regime had been racing for military gains and control on the ground ahead of Putin and Erdogan’s meeting. And despite the deal, the prospect for continued fighting remains. Speaking after the cease-fire announcement, Erdogan maintained that Turkey wouldn’t “remain silent” about any attacks by Damascus forces.

“The military operations will continue until the regime retreats behind the line of the Turkish observation points, as per the borders provided for in the Sochi Agreement,” Maj. Youssef Hammoud, a spokesman for the Syrian opposition, told Al-Monitor.