The conflict between Turkey and Kurdish militants is becoming more complex and destructive as the Turkish army begins using drones in warfare. 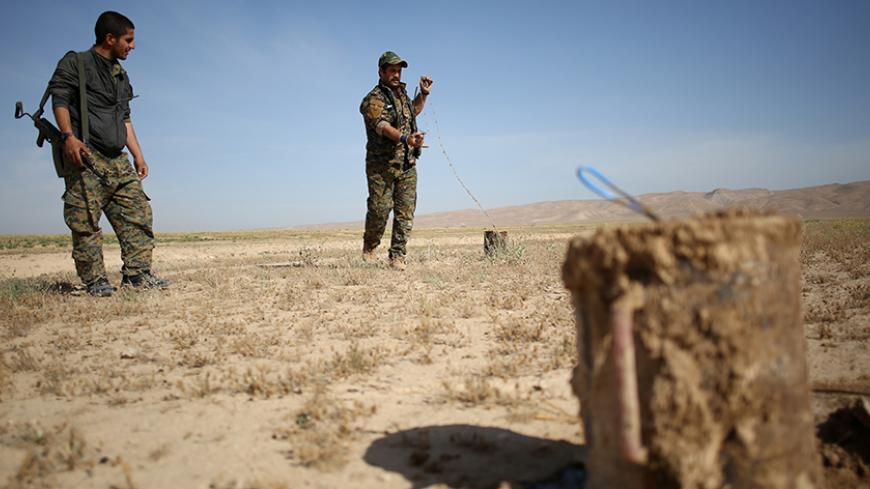 In armed conflicts, each new weapon or technique introduced typically elicits a countermeasure or new move by the opposing side. Such action-reaction cycles can sometimes escalate clashes to levels both sides come to regret. This is the current situation involving Ankara and the Kurdistan Workers Party (PKK) and between the Islamic State (IS) and the international coalition confronting it.

As noted Sept. 12 in Al-Monitor, in “Ankara hardening anti-PKK strategy,” the Turkish government, confident in its declaration of a state of emergency and experience gained in its struggle against the Gulen movement, has settled on a strategy of total liquidation of the PKK to the exclusion of attempts at deterrence. In this regard, Ankara last month introduced on the battlefield the Turkish-made medium-altitude, long-endurance Bayraktar TB2 armed unmanned aerial vehicle (UAV). The drone's manufacturer, Baykar Makina, is owned by President Recep Tayyip Erdogan’s son-in-law Selcuk Bayraktar.

According to announcements by the Turkish Armed Forces (TSK), the Bayraktar UAVs killed 18 PKK militants in their first three operations in the rural terrain of Cukurca, in Hakkari province. Media reports said that during Oct. 1-10, when clashes were particularly heavy, about 90 (or 27%) of the 330 PKK fighters killed were hit using Bayraktar TB2s. Currently, the TSK is operating 12 TB2 UAVs in southeast Turkey and also in Operation Euphrates Shield in northern Syria.

The Bayraktar TB2 can climb to 24,000 feet, stay in the air for 24 hours, can receive commands from some 93 miles and is armed with MAM-L laser-guided missiles manufactured by Roketsan, another Turkish company. Because the Bayraktar TB2 enables target acquisition and firing from some 4 miles away, it is a more effective weapons system in counterterror operations than warplanes and assault helicopters, which take time to reach the combat zone and acquire targets. TB2s are also actively being used for close quarters security of critical battalion bases. PKK fighters approaching these permanently stationed units or moving along infiltration routes have now become easy prey for the TB2.

A security source who spoke to Al-Monitor on condition of anonymity said the Bayraktar TB2 has become the TSK's most substantive strategic asset in its counterterror operations. He said that with the expected delivery of more of the drones, the TSK believes it can destroy the PKK in the southeast and with more advanced UAV models can extend pressure to the PKK military presence in Iraq at Qandil, Zap, Avasin-Basyan and Hakurk.

With Turkey having launched armed UAV warfare against the PKK, the question now becomes how will the PKK react to the power asymmetry it faces? The obvious response is bomb-laden vehicles, which are being increasingly used in suicide attacks, as IS has effectively shown in Iraq and Syria. Thus far, the PKK has easily been able to find volunteers willing to die when they are sent to a target, like an armed UAV with the exception of blowing itself up.

On Oct. 6 in the Yenibosna district of Istanbul, 10 people were wounded in an attack claimed by PKK-affiliate Kurdistan Freedom Falcons using a motorcycle-borne improvised explosive device (IED) attack. Near the town of Haymana two days later, some 18 miles from Ankara, two PKK militants stopped at a checkpoint and blew themselves up on their motorcycles that were rigged as vehicle-borne IEDs before reaching their intended target. On Oct. 9, in a suicide attack against a gendarmerie checkpoint near Semdinli, 10 soldiers and six civilians were killed by a truck-borne IED laden with 5 tons of ammonium nitrate fortified with TNT.

Security sources consulted by Al-Monitor said that between Oct. 1 and Oct. 10, eight vehicle-borne IED attacks were thwarted across Turkey through the apprehension of the perpetrators. Turkey is now hastily trying to register all the motorcycles in the country, bar coding large liquefied petroleum gas cylinders used in kitchens and requiring identification for purchasers of them and imposing strict controls on the sale and storage of nitrate-based agricultural fertilizers. Other measures to curtail the PKK’s vehicle-borne IED campaign include closer cooperation with rental car companies, aggressive searches for stolen cars and registration of accommodation rentals in major cities. No matter how hard the security agencies might try, such attacks are not easy to prevent.

Part of the Turkish security forces’ territory domination doctrine, which is being applied in mountainous terrain in eastern and southeastern Turkey, involves establishing hundreds of temporary small- and medium-scale, self-sustaining military outposts, but it is impossible to provide round-the-clock security for every one of them. Thus the PKK can easily find weak targets on which to inflict heavy casualties and scare the public, thus undermining the psychological upper hand Ankara has achieved through UAV operations. The PKK's goal is a mutually painful stalemate. There is no doubt that the PKK, through its 35 vehicle-borne IED attacks in the past year, has been able to lessen the perception of state supremacy in the struggle.

In short, the more Ankara intensifies efforts to develop armed UAVs, improve its missile technology and target acquisition methods, the more the PKK, in its effort to overcome the power asymmetry, will adopt the methods from its experiences in Syria and Iraq and transfer them to Turkey. This, in turn, portends a sharp escalation in the action-reaction cycle in the field, leading to heavy casualties and destruction. According to the TSK’s website, between Aug. 29 and Oct. 10, 417 PKK militants were killed in counterterror operations, while 88 security personnel were killed.

Of note, the TSK website makes no mention of civilians killed, probably because the yardstick for success in armed clashes is the number of enemy personnel killed. Ankara is trying to liquidate the PKK by killing most of its fighters, while the PKK is trying to prove that it is not easy prey. Worse, both sides have ways and means more lethal than the ones they had in the late 1990s and early 2000s.

This is why the Turkish military is carefully watching the efforts of non-state actors, so far mainly IS, to develop their own armed drones, which will likely be emulated by the PKK. French and US sources confirmed on Oct. 12 that IS jihadis had killed two Kurdish fighters and injured two French special operations troops near Mosul using a remote-controlled hobby plane rigged with hidden explosives.

IS has used surveillance drones on the battlefield for some time, but the attacks, all targeting Iraqi troops, have highlighted its success in adapting readily accessible technologies to make potentially effective new weapons. IS is using relatively simple, commercially available drones, such as the DJI Phantom, which can be purchased on Amazon. The group attaches small explosive devices to them, essentially making them remotely piloted bombs. Military analysts believe that drones will continue to be a problem in Iraq and Syria and elsewhere.

A veteran United Nations official with long service in south Lebanon told Al-Monitor how Hezbollah learned from its experiences with Israel and developed its own fleet of armed drones, beginning with toy model planes. Turkish security sources said they recently suffered two mini-drone attacks by IS that went largely unnoticed, one at Syria’s al-Rai and the other at the Turkish training camp of Bashiqa, in northern Iraq. No doubt the PKK, always a good learner, is watching carefully.