The armed conflict between Turkey and the PKK has been rapidly becoming drone-centric, with this dynamic radically altering the basic characteristics of this conflict while amassing legal and moral issues. 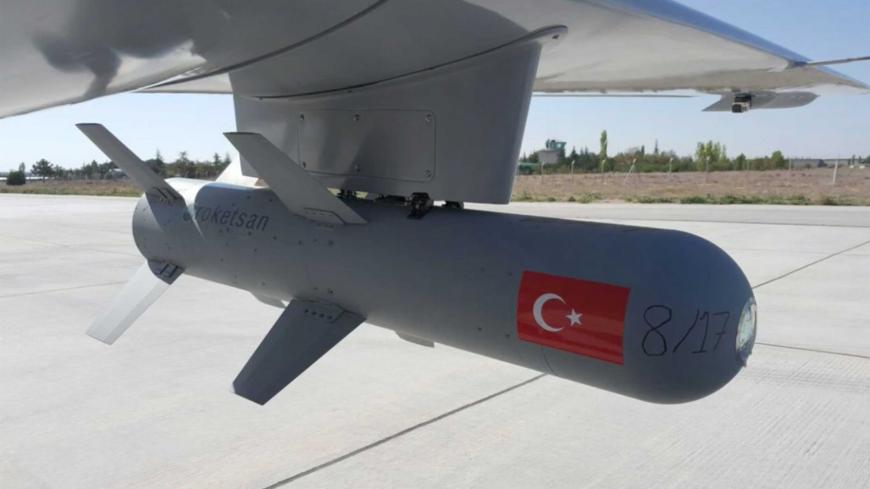 A MAM-L laser-guided missile is seen loaded onto a Turkish Bayraktar TB2 tactical drone in this still from a video uploaded April 30, 2016. - YouTube/Den ProHD

Around 3:30 p.m. on Aug. 31, a group of villagers were hit by fire from a Bayraktar TB2 tactical armed drone in a picnic area about 12 miles (20 kilometers) from the border city of Hakkari, a frequent scene of terror operations.

Mehmet Temel, a 35-year-old father of four children, who had no involvement in any terror activity and who did not have a criminal record, was killed and three others were wounded. Those wounded were later detained by security forces on charges of collaboration with the Kurdistan Workers Party (PKK). The incident, first reported by Amberin Zaman on Sept. 6, has since become a major agenda item.

A deeper analysis of the issue is necessary as the Turkey-PKK clashes have been rapidly becoming drone-centric. It didn’t attract much attention in the media, but at the end of August the PKK attacked a Turkish army military outpost near Semdinli with an off-the-shelf drone carrying an explosive modified from an AGS-17 grenade launcher round and wounded two Turkish soldiers in the first PKK drone attack in the 40 years of clashes.

On Sept. 8, 2016, Turkey introduced the Bayraktar TB2 tactical drone armed with MAM-L (smart micro munition with a modified UMTAS missile, with a range of 8 kilometers [5 miles]) in counterterror operations against the PKK. Security sources in Ankara told Al-Monitor that since September 2016, about 2,000 PKK militants have been neutralized, about 600 of them (30%) by armed drones. Recently, Turkish media widely reported that armed drones neutralized 61 PKK militants just in the previous month. The Daily Sabah said 21 senior leaders of the organization were killed by armed drones in the past year.

Six TB2 drones were delivered to Turkish land forces in June, giving the army 18. The Gendarmerie Command attached to the Interior Ministry uses six and the national police have four for a total of 28 TB2 drones in active duty in counterterror operations.

The Turkish government is planning to increase the number of armed drones to 120 in four years. The Turkish Interior Ministry is the only civilian ministry in the world using armed drones in counterterror operations within national borders. Meanwhile, the Turkish defense industry is working full speed to develop medium-altitude long-endurance drones such as ANKA-S, pilotless combat planes and tactical kamikaze drones. Six ANKA-S models — with 18 hours' endurance time at 23,000 feet that can be controlled via satellites — will be delivered to the Turkish air force this year, to be followed by four more in 2018.

The Turkish Armed Forces (TSK) will thus have the capability of commanding the drones from an operations center hundreds of miles away. Ankara, aware of the operational effectiveness of armed drones in counterterror operations, is determined to increase both the drones' numbers and capabilities. But while Ankara is deeply engrossed in efforts to improve the effectiveness of the drones, concerns pertinent to moral, ethical and legal discussions of this process are lagging.

Although it has been more than a year since Turkey introduced armed drones actively to counterterror operations, it has not yet informed the public how these systems will be utilized and under what conditions. Today the Turkish army, the air force, the Gendarmerie Command, the National Police and the National Intelligence Agency (MIT) have armed drones in their arsenals. However, until today, there has been no initiative to achieve standardization and coordination among these agencies on drone warfare. Each agency is operating its own system with its own in-house institutional culture and standard operating procedures.

Moreover, oversight and monitoring mechanisms of the executive branch over drone warfare have not been established yet. Given the prevailing conditions of the state of emergency, establishing a parliamentary body to provide oversight of drone warfare and enabling civil society, the media and universities to participate in this monitoring seems unlikely.

Comprehensive legislation to regulate the use of armed drones in counterterror operations doesn’t yet exist while there is an absolute need to draw the legal framework that covers the manufacturers of drones, the command centers and the actual users of the weapons because of the possibility of collateral damages and accidents.

The ramifications of excessive reliance on armed drones in counterterror operations in the strategic cultures and modus operandi of Turkey’s security actors should be analyzed to better understand the changes brought to the military ethics and moral values of the security forces.

An informative, useful intellectual debate on the socio-cultural effects of “remote-controlled killing” is practically impossible nowadays because the slightest criticism of the armed-drone tactics is labeled as “treason” and “supporting the PKK.”

In northern Syria, the efforts of the PKK-affiliated People's Protection Units to enhance reconnaissance/surveillance capabilities with unmanned aerial vehicles for the first time, such as with the US-made RQ-20 Puma and civilian model DJI Phantom UAVs, are continuing. The PKK has definitely increased its interest in armed drones. Security officials in Ankara said there have been three armed drone attacks against Turkish military outposts on the Iraqi border between June and August.

In sum, the increasing use by both Ankara and the PKK of armed drones indicates that we are now facing a new dimension in the Turkey-PKK conflict. There is as yet no extensive debate and reporting on this new dimension because the combat zone is far away, in remote rural areas of the country. If what has been so far an essentially rural-area combat is transferred to cities, there will be more civilian casualties. In short, if the drone-centric dynamic of the conflict combines with dynamics of urbanization of the conflict, the human cost of the Turkey-PKK conflict will be much higher. One can only hope that both Ankara and the PKK are aware of the ramifications.