Turkey goes all in on drones

Ankara is rushing to manufacture unmanned aerial vehicles for economic, political and military reasons, but Turkey needs to develop a drone doctrine and consider the ethical ramifications before their use proliferates. 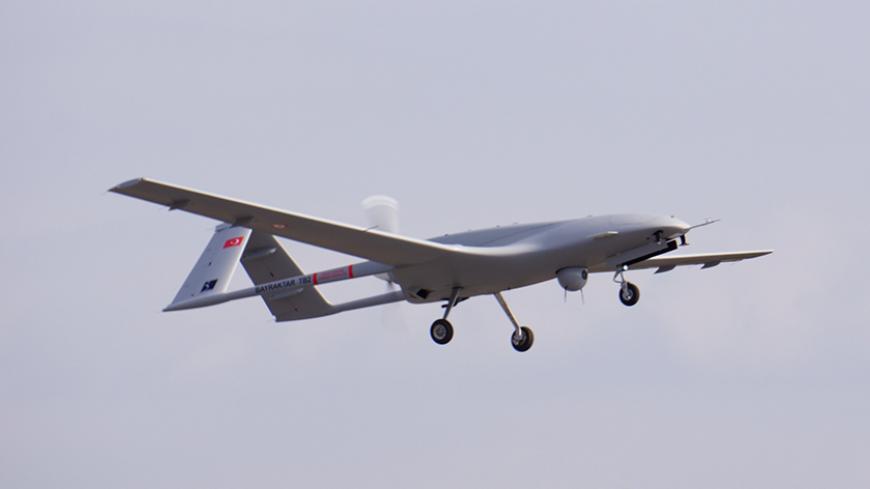 On Dec. 17, Turkey’s locally made tactical unmanned aerial vehicle Bayraktar TB2 fired an air-to-ground missile on its test flight. It was the first armed UAV flight and test firing in Turkey.

The Bayraktar TB2, with a 40-foot wingspan and 1,400-pound takeoff weight, has a 93-mile (150-kilometer) range. In its firing test from an altitude of 16,000 feet, it scored a perfect hit on a 2-square-yard target from a distance of 5 miles. It used a long-range, laser-guided anti-tank UMTAS missile produced by the state-owned weapons manufacturer Roketsan. Roketsan modified the missile, which operates on "fire-and-forget" mode, for TB2 use.

Although it is currently classified as a tactical drone because of altitude, range and payload limitations, the TB2 has significant symbolic importance for Ankara. Turkey is trying to have its say on armed UAV technology widely used in the region by the United States, China, Israel, Russia, Iran and Iraq.

The successful test, lavishly praised in the Turkish media, has eased some of Turkey's concerns. Since 2008, Congress has turned down Turkey's attempts to procure US-made MQ-1 Predator and MQ-9 Reaper drones. All efforts by then-Prime Minister Recep Tayyip Erdogan with President Barack Obama and by then-Chief of General Staff Necdet Ozel with the Pentagon were futile.

Decision-makers in Ankara are aware of the force-multiplier effect of the armed UAVs in low-intensity warfare. Ankara has been trying to compensate for its security deficiency on the Syrian and Iraqi borders by integrating these armed drones into a system with ground control stations that will provide it with aerial reconnaissance and armed-intervention capacity. Ankara wants to cover a 90-mile border with data link and ground control stations. The intention is to design a border security system that will allow pilots in ground stations to assume control of the TB2s after takeoff from their central base at Batman. Turkey has been trying to execute that plan with Heron UAVs bought from Israel, but has encountered maintenance and operational problems.

Ankara also believes the armed drones will be effective in clashes with the Kurdistan Workers Party (PKK), with which combat has been shifting to urban centers and their peripheries. As most major Turkish cities now have airports, TB2s can be deployed closer to operational zones. In addition to the military, other agencies closely following the TB2's development include the Turkish intelligence service MIT, police and gendarmerie.

Initially, 12 Bayraktar TB2s will begin operating with the Turkish army at the beginning of 2016.

Ankara wants to step up test flights to find ways to upgrade its drones. Can Kasapoglu, a senior researcher at the Center for Economic and Foreign Policy Studies (EDAM), spoke to Al-Monitor about the balance needed regarding drone altitude, payload, modernization and policy of use. "Particularly the altitude limit and the payload are of key importance for multitasking and multitargeting of armed UAVs," he said. "Turkey still has a long way to go in this.”

Aselsan A.S., a military electronics supplier, has valuable experience in the use of optics, and Roketsan is knowledgeable in manufacturing missile systems. But Turkey’s key issue is the turbine engine that determines the endurance limits of drones. “These armed UAVs must be capable of easily reaching Qandil and returning,” a security official reminded Al-Monitor, speaking on condition of anonymity.

Meanwhile, Turkey wants to arm the TB2 with weapons already used effectively by its military against the PKK, such as laser-guided and joint direct attack munitions.

Turkey is closely monitoring the flourishing armed drone market globally and in the Middle East. The global military UAV market reached $6.4 billion in 2015; that figure is expected to surpass $10 billion in 2024.

Armed UAVs are seen as the shining star of the Middle East arms market. They top the lists of defense expenditures and procurement in many countries in the region.

The 2014 Global Arms Sales report issued by the Stockholm International Peace Research Institute puts Turkey’s 2014 defense systems/weapons sales at $274 million, making it the 15th largest seller in the world and the second-largest after Israel in the Middle East. (Iran was not included in the assessment because of a lack of reliable data.)

Turkey's Bayraktar manufacturer has a contract to supply tactical drones to Qatar's military, and many Middle Eastern capitals are lobbying hard to learn more about and procure Turkish-made UAVs.

Another of Turkey's ambitious projects is the Anka-S, which has a 5-ton takeoff load and is increasing its payload to 1 ton. This figure suggests Anka-S will have multitasking and multitargeting capacity apart from its reconnaissance and scouting functions. The most important feature separating Anka-S from similar systems is its infrastructure for satellite communications. The system, which will be in constant contact with TURKSAT satellites, can receive commands from within the triangle of Britain-South Africa-Mongolia. Anka-S is expected to join the Turkish military inventory by 2018.

But EDAM's Kasapoglu warns that Turkey has yet to develop a policy for the use of armed drones. Legislation that will list where armed UAVs will be used and by which state institutions is not yet available, and there is no joint doctrine for the security/intelligence bureaucracy.

“For example, will we use UAVs against Turkish citizens?" he asked. "Will we use them within our borders? Will the intelligence service or the military be responsible for operating UAVs outside of our borders? Will police be allowed to use armed UAVs? If the answer is ‘yes’ to all these critical questions, how will coordination be ensured among these bodies?”

Then there is the ethical aspect of the issue. Although Ankara looks at armed drones as a military force multiplier, UAVs are radically altering the pace on the battlefield. A link has been shown between this pace and the "totalitarian trend" in the current combat environment.

It may well be time for Ankara to start discussing the ethical and philosophical aspects of drones that have massive destructive powers and the capacity to communicate at the speed of light.