Turkey is encouraged by the success of its surgical airstrike in Iraq that killed outlawed Kurdish leader Ismail Ozden. 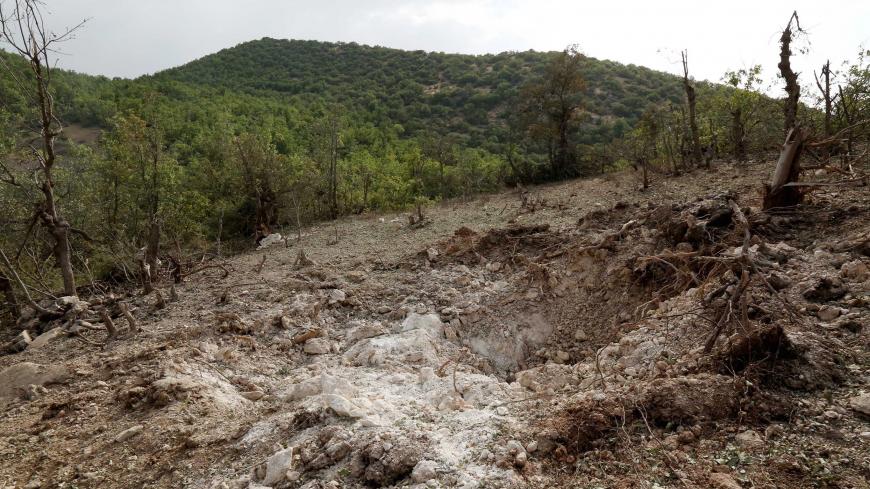 A crater caused by a Turkish airstrike against Kurdistan Workers Party camps in the village of Amadiya, in the outskirts of Dahuk province, Iraqi Kurdistan, July 29, 2015. - REUTERS/Ari Jalal

When Turkey recently conducted an operation to kill a senior leader of the Kurdistan Workers Party (PKK), an outlawed militant group, it entered Iraq to do so and revealed its growing military capabilities. Before this operation, no other country in the region except Israel had the means to carry out targeted killings beyond its own borders.

The operation indicates that Turkey is testing sensitive guided munitions developed locally, that this capability is used effectively and that it's likely to be expanded.

Ismail Ozden — a senior PKK figure code-named “Uncle” Zaki Shingali — was killed Aug. 15 in the northern Iraqi town of Sinjar by drones and F-16s of the Turkish Armed Forces (TSK) and its National Intelligence Organization (MIT). Ozden was the first high-profile PKK leader on Turkey’s "most-wanted terrorists" list to be killed in the first air operation abroad in their nearly four-decade bloody conflict. The state-owned Anatolian News Agency disseminated images of the attack.

Sources Al-Monitor spoke with in Ankara, who spoke on the condition of anonymity, said Turkey is seriously determined to proceed with targeted killings abroad. Speaking after the Sinjar attack, President Recep Tayyip Erdogan affirmed, “We are going to continue to expand our operations against the PKK leadership outside our borders.”

According to defense industry analyst Arda Mevlutoglu, the technical advances Turkey has made are clear after assessing the visual material from the airstrike that killed Ozden.

“This attack has not only military and technical aspects, but also carries strategic and diplomatic messages. According to the visuals available, an unarmed aerial vehicle [UAV/drone] follows two pickup-type vehicles carrying the PKK leader and his team. Then you a see guided munition, likely to be a laser-guided projectile, hitting one of the vehicles, which is destroyed with a massive explosion,” he told Al-Monitor.

“Then Ozden’s body is transferred to another vehicle. Here speculation is in order: Either by miracle Ozden got away with injuries and was being sent for medical attention, or the Kurds didn’t want his corpse to be seen. We then see the UAV following the vehicle carrying Ozden’s body, and a short time later that vehicle, too, is hit and destroyed, most likely by a laser-guided projectile."

The target could have been laser marked by a UAV, and an F-16 in the area might have fired its smart munitions. The Turkish Air Force has a wide selection of sensitive guided projectiles in its stocks. The most widely used is the GBU-12 Paveway II laser-guided missile produced in Turkey under US license.

Also, the Turkish Air Force has a laser guidance kit (LGK), which transforms MK-82 and MK-84 bombs to smart munitions, and Teber kits, which are guidance kits installed on conventional bombs to improve their accuracy. While the LGK has only a laser-guidance mode, Teber can use laser, inertial navigation systems (INS) and global positioning systems (GPS). Turkey also uses precision guidance munition kits that offer INS and GPS guidance. Also available is the INS and GPS wing assistance guidance kit, used to glide to long-range targets.

According to Mevlutoglu, the second strike most likely was made with Micron munition MAM-L carried by the UAV.

Of course we have to acknowledge that Turkish F-16s could not have reached Sinjar, some 120 kilometers (75 miles) from the Turkish border, without informing the US military. It's been reported that Turkey notified the United States of the flight but not of its operational details.

In short, Ozden's targeted killing was made possible with military technologies developed by the United States, Canada and Turkey, and with the US military's approval for Turkish F-16s to enter Sinjar air space.

We also noted clearly from the video recording that the MIT and TSK cooperated with each other closely. Ozden’s movements were monitored intently on the ground with human intelligence. Air elements knew definitely which vehicle Ozden was in during the attack. A ground element must have been instantly informing the drone command center, enabling the drone and F-16 to carry out their coordinated attack.

Ankara sources talk about advances in Turkey’s intelligence gathering in real time, far from Turkish borders, and its ability to carry out sensitive operations. With the support of the political echelons, it's likely that this ability will grow in coming months. The Anka-S armed drone, which has successfully completed its firing tests, will soon offer the capability to easily hit a target 1,000 kilometers (621 miles) away by satellite tracking.

What will the PKK’s reaction be to increased targeted killings abroad? To find the answer, we must first look at the period of September to December 2016, when armed drones were used against the PKK for the first time in Turkey. The PKK responded by stepping up its use of vehicle-borne improvised explosive devices (VBIED) and, in particular, suicide VBIEDs, exploiting the poor physical defenses of security outposts in Turkey’s rural southeast and attempting to overcome the advantage afforded to Ankara by drones.

New weapons and techniques used by the state on the front lines are bound to give rise to new maneuvers and tactical evolutions by its nonstate adversaries — as well as a reversion to old tactics. The action-reaction cycle could take an unexpected route that's not intended or wanted by either side of the conflict. If Ankara continues with this type of targeted killings abroad, the PKK might revert to intense attacks using VBIEDs and drones, which could create a new dimension to the lengthy conflict between Turkey and the PKK.