An indictment alleging an attempted coup against Turkey's ruling Justice and Development Party government follows the party's narrative of a sinister parallel state and its imperialist collaborators. 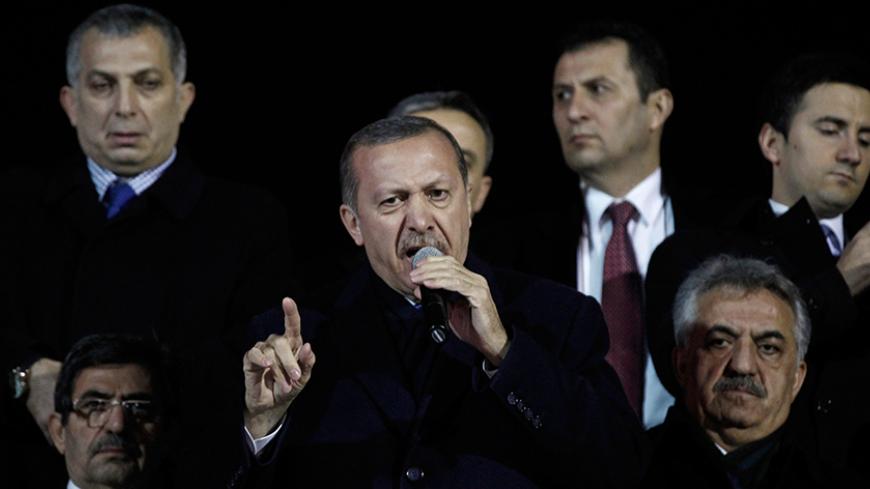 Turks have been hearing about a so-called parallel state since December 2013, when two concurrent corruption investigations targeted then-Prime Minister Recep Tayyip Erdogan, his son and various members of the government. The term, coined and popularized by Erdogan, insinuates that the Gulen community, Turkey's largest Islamic movement, has established a cabal with sinister intentions within the state bureaucracy, particularly in the police force and the judiciary. This therefore suggests that the corruption investigations were nothing more than “coup attempts” by the alleged parallel state.

This was initially just a political narrative adopted by the government and its supporters. Gradually, however, the judiciary began to answer the call to take on this supposed major threat to national security and its members. On Oct. 1, prosecutor Ismail Ucar submitted a 1,453-page indictment to a court. Like other indictments in politically driven cases in Turkey, this is a peculiar document, quite unlike any in the Western legal tradition.

The indictment begins with dry details about all the claimants, the accused and the relevant articles in the Turkish penal code on “coups” and “armed terror organizations.” There are 27 claimants, beginning with none other than Erdogan, along with his son, his son-in-law and all the ministers in the Justice and Development Party (AKP) Cabinet in December 2013. Heading the list of the 69 defendants is the Pennsylvania-based Islamic scholar, Fethullah Gulen — founder of the Gulen community — followed by police officers and others who allegedly took orders from Gulen to conduct a coup against the elected government.

The fun part of the text is the long introduction, in which the prosecutor offers his analysis of “political and sociological events” to highlight the problem at hand. For this, he goes all the way back to ancient Anatolia: “The states founded on this territory, such as [those of the] Hittites, Lydians, Romans, the Seldjuks and the Ottomans, have always been definitive in world events. It is only Turkey that exists on the same land that has not been able to play an influential role. This is despite the fact that Turkey has the potential to be a great power. This is a known fact.”

Ucar then explains why Turkey cannot be as great as it deserves to be: “Turkey is prevented from becoming a superpower through all sorts of ugly schemes, conspiracies, terrorism and crises. These are brought upon us by our Western ‘friends’ and their native collaborators. The republic, despite its solid foundations, faces serious risks. We are now fighting a war of liberation.”

These are, for sure, not legal considerations, but political arguments. In fact, they fully align with the government's political narrative. The statement “We are now fighting a war of liberation” was Erdogan's motto during the 2014 election campaigns. The prosecutor also freely quotes from the opinion columns of staunchly pro-Erdogan writers. In one such instance, he likens Erdogan to Frodo from the Lord of the Rings, who fights bravely against the “Smeagols who try to steal the ring,” the ring representing political power.

The indictment's thesis on Western plots against Turkey continues with the additional emphasis that religious sects and cults might well be the collaborators of “imperialism.” As one can easily surmise, in the context of contemporary Turkey, this “collaborator” is the Gulen community, which the prosecutor accuses of creating the covert cabal, a “network of evil” within the state to undermine Turkey from within.

In addition to such political narratives, the indictment lays out some serious charges. Police officers belonging to the Gulen community are accused of using “fake informant letters, illegal wiretappings, [and] faked legal evidence” to implicate and arrest their political opponents. Such charges had been made before in a different judicial episode by investigative journalists, among them Ahmet Sik and Nedim Sener, and Police Chief Hanefi Avci, who all curiously ended up being arrested on overblown charges by the very police officers they had accused of abusing their authority. These arrests were part of the “coup cases” from 2008 to 2013 for which numerous secular officers, public servants and even intellectuals were jailed. The cases were widely criticized as witch hunts.

If certain members of the Gulen community did have criminal roles in the coup cases in collaboration with another entity, the latter might well be an outfit more concrete than some sort of shadowy “imperialism” — that is, Erdogan and his AKP, which put their full political support behind the coup cases at a time when the AKP and the Gulen community were the best of allies, not yet sworn enemies.

Of note, the coup case indictments were also characterized by political fantasy mixed with some legal facts. Gareth H. Jenkins — the only Western journalist to have studied the several-thousand-page indictment from the most serious of these cases, the one involving an alleged coup-conspiring cabal called Ergenekon — put this well in his 2009 report, “Between Fact and Fantasy: Turkey’s Ergenekon Investigation.” Jenkins observed, “The indictments themselves appear to be the products of ‘projective’ rather than deductive reasoning, working backwards from the premise that the [coup] organization exists to weave unrelated individuals, statements and acts into a single massive conspiracy.”

Six years later, the same projective reasoning once spearheaded by the Gulenist is now being used against the Gulen community itself. Once again, there is an indictment alleging a single, massive conspiracy against Turkey and connecting dots with an amalgam of fact and fiction. The logic flows not from finding evidence and building a case based on it, but from first designating a conspiratorial enemy and then finding evidence to nail it. As a result, even Gulen community kindergartens can become targets in terrorism investigations.

At the end of the day, the indictment may lead to prosecuting some officials from the Gulen community for real wrongdoing, such as illegal wiretapping, doctoring evidence and other abuses of authority, but its major premise — that the corruption investigations of December 2013 were coup attempts — will be hard to sell. The investigations exposed solid evidence of corruption, as admitted even by some AKP supporters. The argument that the Gulen-affiliated prosecutors also had political motives for exposing corruption in the ruling party in the wake of elections might be valid, but twisting those motives into evidence of a “coup” looks, indeed, to be a political narrative, not a legal case.