Yet another 'coup attempt' in Turkey

Turkish authorities are threatening life imprisonment for 35 Besiktas soccer fans on charges of trying to overthrow the government based on their participation in the Gezi Park protests. 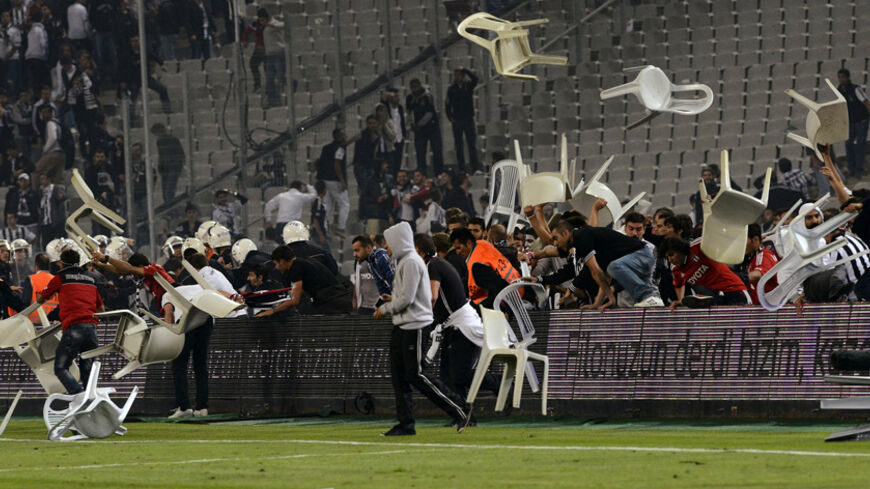 On Sept. 9, an Istanbul court approved an indictment requesting “aggravated life imprisonment” for 35 soccer fans who support Besiktas, Turkey’s oldest soccer team, and who call themselves the Carsi group (the Bazaar group, in English). Their alleged crime does not, however, involve sports, but the Gezi Park protests they joined in July 2013. Prosecutors argued that the protests were not an ordinary affair, but a “coup attempt” as criminalized by the Turkish Penal Code in Article 312: “Any person who attempts to dissolve [the] Government of [the] Turkish Republic, or [takes advantage of the government while it is under threat] is punished with … life imprisonment.”

How could a bunch of protesters, who had no weapons, dissolve the government of Turkey? The prosecutors noted that a gun and some bullets had been found in one of the suspect’s homes. There was no evidence, however, that the gun had been used during the Gezi protests. A prosecutor noted that the protesters had marched toward the prime minister’s office in Besiktas, in Istanbul, possibly with the intent of storming it. More tellingly, the indictment stated the following: “It has been observed that the suspects tried to bring the world’s attention, especially that of the foreign media, to the events, to create an image similar to the Arab Spring, with the aim of ousting the legal Turkish government by illegal means.”

So, the prosecutors used the following reasoning: The Arab Spring toppled governments in the Arab world. Turkey’s protesters tried to make events look like the Arab Spring. So, they are guilty of trying to topple the Turkish government. There is a small problem with this reasoning: The very Turkish government in question supported the Arab Spring, most notably in Syria, arguing that it is the people's right to hold popular demonstrations with the aim of forcing governments to resign. Therefore, according to the prosecutors’ logic, something that is a right in the Arab world is a crime in Turkey and deserves life imprisonment.

Much of the indictment is full of accusations stemming from the presumption of a coup attempt. For example, one of the suspects is said to have paid for the pizzas and meatballs that his fellow protesters ate during the events, proving his participation in the “coup.” Wiretapped communications among the protesters about how to resist the police were also presented as evidence.

On one issue, the prosecutors seem to have a point: Some of the Gezi Park protesters, including members of the Carsi group, were really willing to storm the prime minister’s office, and perhaps his apartment in Ankara as well. They were prevented from doing so and dispersed by the police. Had they succeeded, then they certainly would have been guilty of vandalism. Other acts of vandalism, such as the burning of police cars, repeatedly occurred during the protests, along with throwing rocks at the police.

Still, is this evidence of a coup attempt, or is it just acts of violence by an angry mob? Following an established legal tradition in Turkey, the prosecutors seem certain about the former. Here, especially in cases involving “state security,” the benefit of the doubt goes not to the accused, but the accuser. The same approach was evident in earlier episodes (2007-12) involving alleged coup attempts, such as the Ergenekon and Sledgehammer cases.

In those instances, hundreds of military officers were arrested, along with dozens of journalists and even some academics, and charged with conspiring against the Justice and Development Party (AKP) government. The evidence was often overly circumstantial and even exaggerated, as explained by Gareth Jenkins, the only Western journalist who reviewed the 4,500 pages of indictments in detail. The prosecutors, Jenkins argued, mixed “fact and fantasy.” No wonder Turkey’s Constitutional Court overturned the Sledgehammer verdicts, which included long prison sentences for more than 200 officers.

It is an irony of history that a main actor in the earlier coup cases — members of the Gulenist movement in the police and judiciary — has been accused by the AKP government of being the culprit behind another “coup attempt” in December. The accusation was that Gulenists, acting as a “parallel state” within the state, initiated the corruption investigations made public Dec. 17 and Dec. 25 that targeted four AKP ministers, along with President Recep Tayyip Erdogan’s son, with the intent of toppling the government. While there are plenty of signs to indicate that the corruption investigations were politically motivated, does that make them a “coup attempt”?

For hard-core AKP supporters, such questions are pointless. To them it is clear that the AKP has heroically survived three waves of coups in the past seven years: first by the military, then by the Gezi Park people and then by the “parallel state.” These supporters say that evil foreign powers that want to halt the glorious march of “New Turkey” are behind the attacks.

A more objective observer might arrive at a more mundane explanation — a vicious power struggle in which neither the incumbents nor their opponents play by the rules of a mature, civilized democracy. One such observer, Sukru Hanioglu, professor of late Ottoman history at Princeton University, noted this in an article he penned during the Gezi protests. For more than a century, he wrote, Turkish politics has been trapped in a vicious cycle of authoritarian governments versus conspiratorial opposition. The underlying problem, he said, was “the conceptualization of politics as a tool to seize total and pervasive power.”

This vicious cycle will not be broken after all the “coup plotters” in the country are eliminated, one by one, as the hawks in the AKP seem to believe. Authoritarianism, in fact, will only deepen the cycle, inviting more fierce forms of opposition. The cycle will end, and Turkey will find peace of mind, only when Turks try something they have never before attempted — a social contract that addresses and includes all social groups and restructures the state as a limited power and a fair arbiter.