Fear of Shiites on the rise in Turkey

The Justice and Development Party government is indifferent to the increase in Shiite-phobia in Turkey. 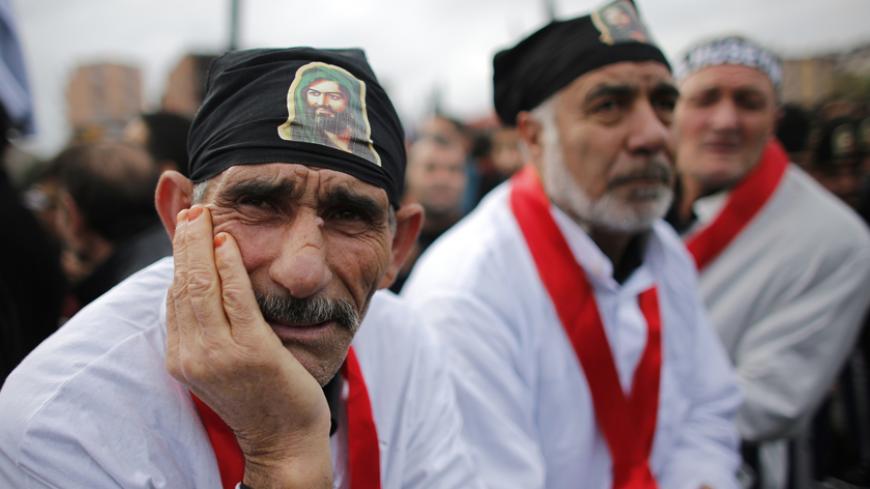 Not a day passes without a headline in the Turkish media about the revival of Islamophobia in the West. Pundits wonder how Muslims in the West will be affected. As Al-Monitor’s columnist Cengiz Candar wrote, Turkish President Recep Tayyip Erdogan is extremely sensitive about the growing Islamophobia in the West and does not miss an opportunity to express his concerns in public. Erdogan’s claim to the leadership of the Muslim world is well documented. Yet, we must ask, are all Muslims equal and treated fairly in Turkey?

Shiite-phobia is the other side of Islamophobia. It is not a term frequently used in Turkey, and the label is often misunderstood. For instance, one notable Shiite elder told Al-Monitor on condition of anonymity, “There is no fear of the [Shiites], they just really do not like us because they think we are heretics.” Shiite-phobia indicates irrational fear, dislike and hatred toward Shiites. It is anti-Shiism.

In the last decade, in line with the rise of the influence of Salafist groups, Shiite-phobia has been showing its ugly face more frequently and openly in Turkey. One of the reasons for the menace of Shiite-phobia to spread so quickly is the conflicts in Syria and Iraq, and the subsequent establishment of the Islamic State (IS).

Al-Monitor interviewed more than 10 pundits in Turkey about Shiite-phobia — some of whom are Shiites and others who are Sunnis — but almost all of them asked not to be named for fear of repercussion. One interviewee said, “The moment you publish an article like this, you are doomed to be labeled as an Iranian spy in Turkey.” Another pundit said, “Even in our own mosques we cannot act freely. We fear constant surveillance and attacks.”

These fears are not baseless. During Ramadan in 2014, several Shiite mosques — which are not under the control of the Turkey's Directorate of Religious Affairs — were attacked in Istanbul.

Shiite-phobia in Turkey can be viewed on two levels. One is the personal experience of Turkish Shiites who face discrimination. The mainstream media and the majority of Turks remain oblivious as most Shiites keep quiet for fear of ostracization. The other is the language used in the mainstream media when analyzing events and policies in countries with Shiite populations such as Yemen, Lebanon, Syria, Iraq and Iran.

In Turkey, Shiites face one of the most difficult minority positions indeed. Yet, they are not officially considered a minority. Just like the Alevis, they are categorized as part of the country's Muslim population. Compared to the Alevis their numbers are small and their political weight is minimal. Most Shiites live in Kars, Agri and Igdir, and are seen as Azerbaijani. Traditionally, they are known to be quite nationalistic and considered to be living in peace with the Turkish state. That said, since the 1979 Islamic Revolution in Iran, there has been a wave of Islamization in Turkey; into the early 2000s, the Iranian revolution was supported and then-Supreme Leader Ayatollah Ruhollah Khomeini was revered as “the imam.”

Kemal Erdemol, a prominent researcher and journalist, told Al-Monitor, “There are still Sunni religious orders in Turkey that respect Iran and the Shiites for standing up to the United States.” Erdemol said that rather than fear of the Shiites in Turkey, there is opposition and antagonism toward them.

Another Shiite scholar, who asked not to be named, told Al-Monitor, “There are also converts in Turkey, those who converted from one of the four Sunni branches to Shiism. They face the most severe repercussions and are labeled as aberrant.”

He added, “Shiite-phobia has always existed in Turkey in scholarly writings and at the conceptual level for the ulema [Sunni] but now it has descended to the streets, sometimes violently. Shiites in Turkey, just like the Alevis, face strong discrimination in government employment, and now even Shiite shopkeepers are threatened. In certain districts in Istanbul where support for the caliphate, IS and other Salafist movements is strong, we clearly see hatred of Shiites. Shiites are called rafidis [rejectors], safawis or even dajjal [an evil figure in Islam, the false messiah]. Some Shiites hide their identity because they are not looked upon favorably. In one instance, a friend had a small rock left on his office desk with an offensive note, claiming Shiites worship stones or graves.” (Shiite Muslims put a pebble or a small rock called muhr on their prayer rugs as part of their tradition.)

A prominent journalist who has studied in Iran, who is not Shiite, told Al-Monitor, “Any Turkish citizen who is Shiite is seen as a potential spy for Iran.” Intriguingly, Pew Research Center findings show that unfavorable opinions about Iran were more prevalent among Turks by the end of 2014 than anti-Americanism. The same survey found Saudi Arabia stands out as one of the most favorable countries in Turkey. Neither the seculars nor the observant Sunni Muslims like Iran, which intensifies the doubt about loyalties of Turkish Shiites. No wonder the Gulen movement attempted to brand Hakan Fidan, former head of the National Intelligence Organization, as an Iranian spy.

The Syrian civil war has brought all this doubt, prejudice and hatred toward the Shiites to the forefront. As Al-Monitor previously reported, Erdogan has criticized Hezbollah and Iran openly and even the Israeli attack on Hezbollah did not seem to be a concern for the Turkish government. Turkish criticism of Syrian President Bashar al-Assad’s regime has reflected itself in both official and unofficial rhetoric, bringing to the forefront not only anti-Alevi but also anti-Shiite sentiments. There are several blogs (“Danger of Iran” and “Those who have deviated”) and news portals specifically dedicated to the threat of Iran, with Shiites referred to in derogatory terms. These online publications blame Turkish Shiites for being servants of Iran, attempting to convert Turks to the Shiite sect, support Assad and spread hatred about Saudi Arabia, Wahhabism, the Taliban, Salafism, as well as against Arabs. Shiite scholars are bluntly labeled as “a threat to the Turkish state.”

The framing of the news in Turkey also fans the flames of Shiite-phobia. The Turkish mainstream media, for instance, has been referring to almost all protests of the Arab Spring since 2011 as “revolutions," except for those in Bahrain and Yemen. Indeed, the latest events in Yemen are labeled as a “coup,” referring to the Houthis who are Shiites as “American agents” and aberrant. The Houthis are seen as puppets of Iran and guilty of destroying Yemen.

Another example is that the allegations about the involvement of the Turkish ambassador and Turkish Airlines in arms and fighter smuggling to Yemen were simply dismissed by Turkish officials. One bureaucrat told Al-Monitor, “All of this news is Iranian propaganda.” Although the allegations may be baseless and initiated by Iranian-supported media outlets, Oren Adaki, a research analyst and Yemen expert at the Foundation for Defense of Democracies, told Al-Monitor, “The Turkish government can only deny responsibility for the transfers so many times before the question arises what they are really doing to stop these weapons.”

Indeed, when the Turkish ambassador tweeted that all Yemenis are greedy, one Turkish commentator wrote: “Maybe it is because they are Shiites, since the Turkish government prefers the Muslim Brotherhood and Salafists.”

Shiite-phobia, not acknowledged and rarely discussed in the public domain, is on the rise in Turkey. This is most visible in the framing of the news from the Middle East and discrimination silently experienced on a daily basis by Turkish Shiites. While calling upon the West to battle Islamophobia and claiming to lead the Muslim world, Turkey must find ways to curtail Shiite-phobia within its own borders.