The Shiite Scare in Egypt

Reporting from Cairo, Holly Dagres writes that Egyptian Shiites are increasingly being targeted for persecution by ultraconservative Salafists as well as by the government. 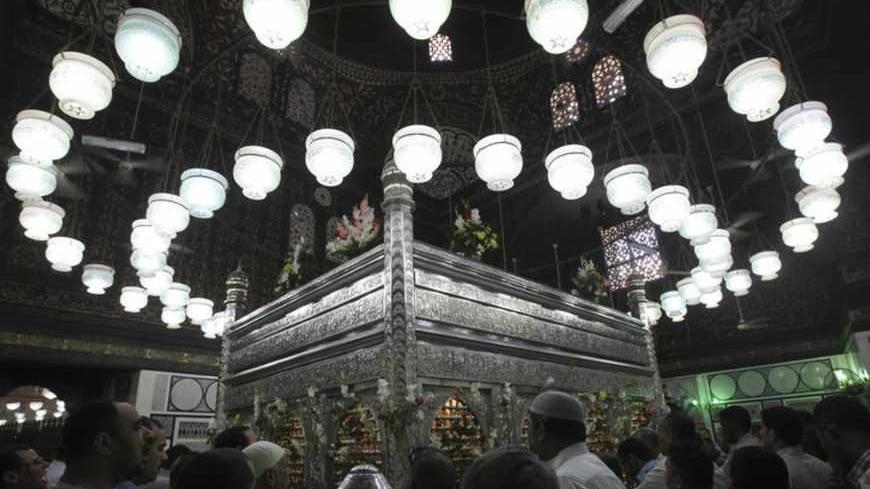 “No to Iranian tourism in Egypt.” “We reject the existence of Iranian Shiites in Egypt.” “Islam has no Shiites.” These sentiments were among the messages on signs held by some of the several dozen Salafis protesting in front of Al-Azhar University against an Iranian official visiting Cairo to attend a Sufi conference commemorating the birthday of Aisha, the wife of the Prophet Muhammad. Some Egyptian newspapers reported that the Salafis stormed the conference, causing it to end earlier than expected.

In November 2012, Shiites had been prevented from entering Cairo's al-Hussein Mosque to commemorate Ashoura, the martyrdom of the prophet’s grandson Hussein at Karbala. The decision was made after a group of Salafi and Sunni movements filed a petition to bar Shiites from entering the mosque. Similarly, in October 2011, Egyptian authorities denied the registration of the Shiite Tahrir Party because it was “based on religious principles,” even though other parties with religious affiliations — for example, the Freedom and Justice Party (Muslim Brotherhood) and al-Nour Party (Salafists) — were not only allowed to register, but also to participate in elections.

More recently, it was reported on April 8 that a student at the Al-Azhar College for Girls in Assiut had been accused of being a Shiite, with some calling for her expulsion. This and other incidents suggest that anti-Shiism is becoming commonplace in Egypt, much of it rooted among ultraconservative Salafis, whose political influence is growing. Also of note are goverment-sanctioned efforts to restrict the number and movement of Iranian nationals visiting tourist sites, in part due to fears of their congregating at Shiite shrines in Cairo. One could thus easily argue that Egypt is in the grip of a “Shiite scare.”

For most of their history, Egyptian Muslims have been spared the sectarian issue of Sunni versus Shiite. This is in part because the Egyptian version of Sunnism incorporates Shiite influences, a situation unique to Egypt among the Arab nations. This is reflected in the Egyptian love of Aal al-Bait, the Prophet Muhammad’s descendants – Sayeda Zainab, Hussein, Sayeda Nafissa and Sayeda Aisha – whose shrines worshippers regularly visit in Cairo. Egyptians also adopted the Fatimid tradition of celebrating Ramadan with lanterns, baking kakh cookies for Eid, and so forth.

Since Shiites first arrived in Egypt under the Fatimid dynasty (969–1171), scholars have documented what they classify as three waves of Egyptian Shiites. The first wave comprises the descendants of Ali — the prophet’s cousin and son-in-law and the central figure in the dispute over who should succeed the prophet as caliph and lead the Muslim community. After the fall of the Fatimids, this generation of Shiites became converts to Sunnism. The second wave of Shiites consisted of Iranians, Lebanese, and Syrians who emigrated in the nineteenth century and continued to practice Shiism. Egyptian President Gamal Abdel Nasser’s wife reportedly descended from this wave of Shiites. The third wave was made up of Sunni converts, known as Neo-Shiites, whose turn to Shiism stemmed from the Iranian Revolution of 1979. Many Neo-Shiites had been members of Sunni groups like the Muslim Brotherhood and Islamic Jihad, the latter revering Iran’s Islamic state after becoming disillusioned with their own movement’s failures at the time.

According to various statistics, of Egypt's 82 million people, Shiites constitute 1 million to 2.2 million, about 1% to 2% of the population. The Shiites, although not an underground sect, are often forgotten in discussions of Egypt's religious minorities. In 1959, Al-Azhar issued a fatwa recognizing Shiism as a legitimate branch of Islam. Regardless, Egyptians tolerance of Shiites has been threatened in the 2000s because of regional issues, including sectarian conflict in Iraq, Iran’s controversial nuclear program and Hezbollah’s war with Israel.

Sectarian divisions among Egypt's Muslims are primarily traceable to the Hosni Mubarak era, when the Egyptian president bandwagoned the "Shia crescent" rhetoric of King Abdullah II of Jordan. This was manifested in the Mubarak regime’s belief that Arab Shiites were loyal to Iran, rather than the countries in which they lived.

In Sunni Arab states, like Egypt, the notion exists that Shiites use their religion to subvert not only Sunnism, but also regimes. The majority of Shiites in Egypt do not have a personal or political relationship with Iran, but nonetheless, analysts have observed that the persecution of Shiites tends to fluctuate depending on Iran’s influence in the region. For example, numerous arrests were made after the 2006 war between Israel and Hezbollah, an Iranian ally, as it created widespread support for Hassan Nasrallah, the movement's leader.

At the time, Hossam Bahgat, as director of the Egyptian Initiative for Personal Rights (EIPR), said to Dawn, “In the eyes of the security forces, there is no clear difference between Shias and a militant religious organization. They simply don’t care that Al-Azhar recognized them.”

Without apparent justification, in 2009 the state security apparatus arrested more than 300 Shiites and held them on false charges, oftentimes as suspected terrorists.  Testimony from former detainees indicted that officials had little interest in the detainees' political activities, but rather, focused on their religious practices. Transcripts of the interrogations were leaked to state media outlets in what appeared to be an attempt to turn the Egyptian public against the Shiites.

Although anti-Shiite rhetoric existed prior to the January 25 Revolution, it seems the majority of hostility toward Shiites since is for political gain rather than religious credence. Shiites in Egypt are currently a source of debate due to the crisis in Syria and the government aligning itself vis-à-vis the proxy wars of Iran and Saudi Arabia in various parts of the region. As long as Bashar al-Assad remains in power in Syria, and Iran continues to back his regime, the Shiite scare will continue in Egypt and elsewhere.

Holly Dagres, an Iranian American, is an analyst and commentator on Middle East affairs. Follow her on Twitter @PoliticallyAff.