An Egyptian court has banned Shiite websites and TV channels, under the pretext that they threaten national security, stirring controversy among Shiites in Egypt. 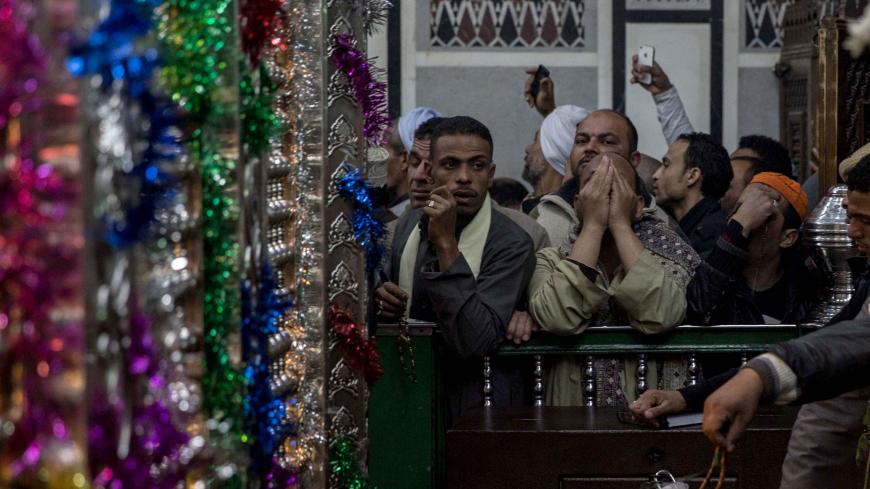 Shiite Muslims gather to pray on what they believe to be the birthday of Imam Hussein, at Al-Hussein Mosque in Cairo, Egypt, Feb. 17, 2015. - Ahmed Zakaria/Anadolu Agency/Getty Images

Egypt has banned Shiite websites and TV channels, including the website of renowned Shiite activist Ahmed Rasem al-Nafis, in an attempt to prevent any exploitation of religious ideologies to achieve political gains.

The Cairo Administrative Court decided Feb. 23 to accept the lawsuit filed by lawyer Samir Sabry in which he demanded the closure and cessation of Shiite websites and TV channels in general, and Nafis’ website in particular.

“The reasons behind this verdict are based on the dangers of Shiite ideology on Egyptian society and national security as Shiites in Egypt use religion for political manipulation,” the office of Sabry told Al-Monitor. “The purpose of those who advocate Shiite ideology is aimed at creating discord in the country and implementing the agendas of foreign countries to destroy the Egyptian state.”

Nafis, who is also a physician, told Al-Monitor that the closing of his website is part of the government crackdown on freedom of expression, opinion and religion. “There are many websites that have been shut down in Egypt and it is no wonder that my site has been closed as well,” he said.

Nafis added, “As Shiites, we do not want to convert Egyptians to the Shiite sect. We have our own ideas and perceptions and we are not hurting anyone.”

He said Egypt should embrace people with different points of view and uphold values of respect of others and give them freedom to express their ideas and practice their religious rituals.

According to Nafis, Shiite Islam has longstanding roots in Egypt as the Shiite Fatimids came to power in 969 in Egypt, and founded a new capital called Cairo as the seat of the Fatimid dynasty.

“The Fatimids ruled Egypt for 200 years [969-1171] and formed its identity. They also founded the famous Al-Azhar University in 970 in Cairo, which was originally established as a Shiite university,” he said. Saladin then came to Egypt and overthrew the Shiites.

“There are many contradictions in Egyptian society when we look at the country's history and the people’s practices,” Nafis noted.

Meanwhile, parliamentarians have backed the court’s decision, saying that Shiite ideology threatens the security of the Egyptian state, especially amid regional tensions.

“Awareness must be raised from the relevant religious institutions starting from the Ministry of Awqaf [Endowments] and the Islamic Research Academy [affiliated with Al-Azhar] to warn of Shiite thought that aims to serve the agendas in the countries of the Sunnis,” Mohamed Abu Hamed, a member of parliament, told Al-Monitor.

He noted that amid tensions in the region, the state has to take all precautionary measures in order to prevent any internal conflicts, in particular among Muslims. “The country has a Muslim-majority community and stirring religious conflicts in the country would largely affect its security,” Abu Hamed said.

Iran and the rest of the Arab world, especially Saudi Arabia, have always been at loggerheads because of religious differences; Iran has a Shiite majority while Sunnis form a majority in the other countries. Eagerness for dominance has also been among the reasons for regional conflicts.

Shiite activists like Nafis estimate the number of Shiites in Egypt at 1 million. However, government officials and parliamentarians like Abu Hamed say that their numbers are in the thousands.

The Economist, meanwhile, said that there are between 500,000 and 1 million Shiites in Egypt.

Egyptian Shiites have been targeted by the Salafists in the last decade and Al-Azhar Grand Imam Sheikh Ahmed el-Tayeb has repeatedly said that he will never accept any attempts to Shiitize Egyptians.

On June 23, 2013, during the reign of late President Mohammed Morsi, several hundred misguided Sunni Muslims attacked and surrounded the home of Shiite cleric Hassan Shehata, a former Sunni, in the village of Abu Muslim in Giza governorate.

The mob killed the cleric and three of his followers, and dragged their bodies onto the streets. The police did nothing to stop the attack.

Since 2012, Egyptian authorities have started to prevent Shiites from attending the Ashura celebrations at Al-Hussein Mosque in Cairo, which are part of an annual Shiite religious event. The authorities said in a statement that the decision came to avoid any extremist Shiite religious rituals that have no basis in Islam, as these rituals have caused many problems between Sunnis and Shiites in the past.