While Egypt's Al-Azhar officially accepts Shiism and teaches about Shiite schools of jurisprudence in its curricula, some claim Shiites are being persecuted in Egypt as religious authorities and security forces look the other way. 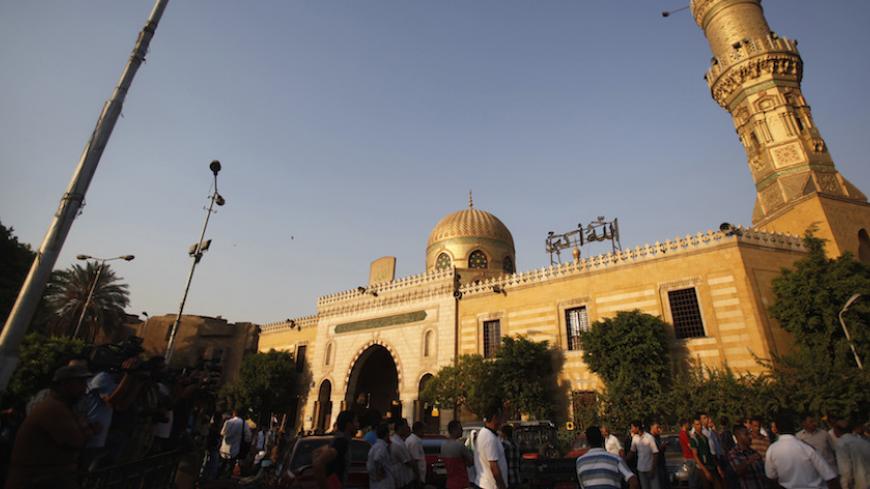 The Egyptian Initiative for Personal Rights issued a report July 21 showing that there were 70 incidents of assault against Egyptian Shiites during the period from January 2011 to May 2016.

The report also highlighted the killing of Shite cleric Hassan Shehata and three of his students in June 2013.

The report indicated that these violations arise in the context of incitement to hatred, violence and discrimination against Shiites. In addition, the report accused many parties of supporting this anti-Shiite attitude such as the official religious institutions and state-run media outlets, in addition to the Islamist political currents such as the Muslim Brotherhood, the Salafist Call and some private media outlets. According to the report, some media outlets provided unbalanced coverage that incited hatred and discrimination against this minority in Egypt. While there are no confirmed statistics on their numbers, estimates range from the thousands to 3 million out of Egypt’s total population of about 90 million.

Shiite intellectual Ahmad Rasim al-Nafis said that regular citizens, under the oversight of the regime, systematically practice violations against Shiites. In an interview with Al-Monitor, Nafis accused security forces of failing to counter such violations and of clamping down on Shiites, especially when they want to visit the sacred shrines of Prophet Muhammad’s family members or travel abroad.

Nafis said Saudi Arabia and some of the Gulf countries have spent billions of dollars on media campaigns to demonize Shiites and turn the conflict in the region from being Arab-Israeli to Sunni-Shiite. He also indicated that such campaigns had influenced the Arab people who now believe that Shiism is more dangerous to the Arab nations than Zionism.

“Al-Azhar is schizophrenic when it comes to Shiism,” Nafis said. He said statements made by the grand sheikh of Al-Azhar accusing Shiism of impugning the Sunni creed contradict Al-Azhar’s leniency toward the Jaafari school of Shiism and the study of the Shiite traditions in its institutions. He added that there are master’s and doctorate dissertations on Shiite figures under the supervision of senior professors at Al-Azhar University.

It is worth mentioning that there is a document attributed to Mahmud Shaltut, the former grand sheikh of Al-Azhar, stating that the Jaafari school of theology is legitimate under Islam. In 2013, Ahmad al-Tayyib, the current grand sheikh of Al-Azhar, said in a television interview that Jaafari is the fifth Islamic school of theology, indicating that it is occasionally used as a source for religious edicts, especially those concerning family affairs.

Nafis believes that the current Egyptian government is too weak to build a state where the concepts of citizenship, freedom of thought and coexistence prevail. He also asserted that Article 98 of Egypt’s Penal Code, under which presenter Islam al-Behairy and author Fatimah Naoot were sentenced to imprisonment for contempt of religion, is a wonderful victory for what he described as the theocracy.

Leading Shiite figure Al-Tahir al-Hashimi agreed with Nafis on the systematic violations against Shiites, indicating that the report observed only a part of what the Shiites actually suffer in Egypt. He said that most Shiites don’t reveal their religious affiliation for fear of being harmed either by the citizens or security apparatuses, asserting that Wahhabism has been strongly prevalent in the Egyptian community since the 1970s, and it stands behind the hostile stance espoused by most Egyptians against Shiites.

Hashimi stressed that Al-Azhar and the Ministry of Endowments adopt a discourse that fuels hatred against Shiites. He said some individuals affiliated with security apparatuses are personally hostile against the Shiites, which negatively affects the nature of the relationship between the two parties, asserting that the religious persecution against any sect harms the reputation of Egypt in the first place.

Sheikh Nasser Radwan, the founder of the Salafist Ahfad al-Sahaba coalition and a vocal opponent of Shiism in Egypt, accused Egyptian Shiites of exaggerating the number of attacks against them. Radwan told Al-Monitor that he has observed — during his participation in book fairs in various Arab countries — several Shiite-affiliated individuals trying to attract young people and influence their beliefs through offering free books that falsify Islamic belief and history.

“I do not support violence. I believe that thoughts should only be encountered by thoughts,” Radwan said. Although he accused Shiites of standing behind many of the violent attacks perpetuated in the Arab world, he stressed that violence is not the ideal way to deal with what he described as the scheme of disseminating Shiism, indicating that violence is counterproductive and distorts the message of those who encounter the dissemination of the Shiite tradition. Moreover, Radwan asserted that the killing of Hasan Shehata, in addition to other incidents where Egyptian Shiites were attacked, are not systematic and were not incited by any of those who take on the responsibility of encountering Shiite thoughts.

In the same context, Radwan believes that teaching Shiism in Al-Azhar does not mean that the latter deems it valid, indicating that Al-Azhar and its sheikhs have adopted clear stances where they condemned the terrorist attacks perpetuated by what he called “Shiite militias” in Iraq, Syria, Yemen and Lebanon.

On the other side, Muhammad Abd al-Aty, the head of the faculty of education’s Islamic Studies Department at Al-Azhar University, told Al-Monitor that there is an intellectual crisis between the Sunnis and Shiites. He said there is a radical Sunni opinion that accuses Shiites of nonbelief and looks at them as more dangerous than any other enemy, while some Shiites consider themselves as the only representatives of Islam and deem their imams infallible. Abd al-Aty emphasized that Al-Azhar stands in a neutral zone between the two views and accepts all within a framework void of radicalism.

Abd al-Aty said that Al-Azhar does not turn a blind eye to the moderate Shiites such as those who are affiliated with the Jaafari and Zaydi doctrines, indicating that students at Al-Azhar University study these two doctrines and the institution views them as “moderate.”