Egypt’s Shiites are being discriminated against through a number of means that are causing the religious minority to be further marginalized. 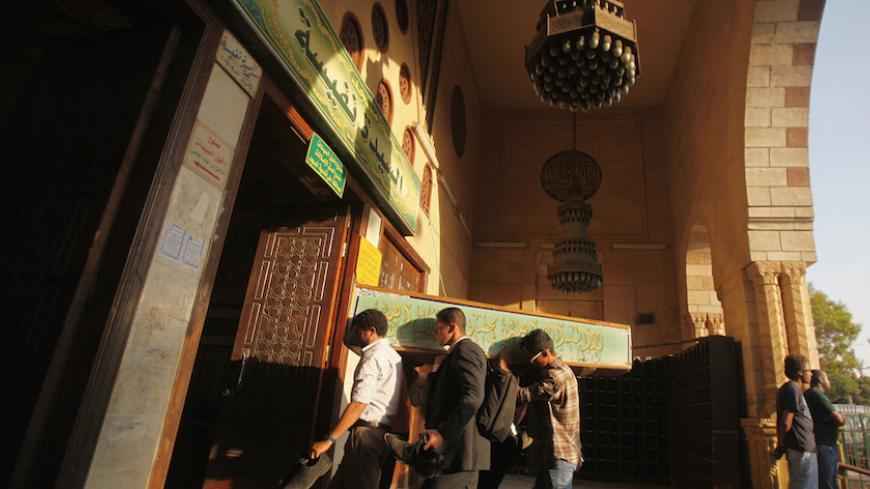 Egyptians carry the coffin of a Shi'ite victim, who was killed in sectarian violence, before funeral prayers in El Sayeda Nafisa Mosque in Cairo, June 24, 2013. - REUTERS/Amr Abdallah Dalsh

CAIRO — For decades, Egyptian regimes have robbed the Shiite Muslim minority of their right to practice their religion freely and publicly, fearing this would lead to the spread of Shiism in the predominantly Sunni country, at a time when their sense of belonging has also been in question.

Egyptian Shiites have been subject to persecution, detention and imprisonment. On May 18, the prosecution accused Shiite leader Al-Taher al-Hashimy of attempting to spread Shiism, disturbing social peace and conducting covert activities, according to a statement Hashimy emailed to Al-Monitor after his release.

Hashimy was detained and interrogated for three days and released after paying a bail of 1,000 Egyptian pounds (about $131), pending trial, the statement read.

On May 12, a physician was sentenced to six months in prison for practicing Shiism, according to a statement released by the Egyptian Initiative for Personal Rights (EIPR). He was found guilty of blasphemy, attempting to cause sectarian strife, as well as threatening national security by attempting to spread Shiite ideology.

“I’m bitterly disappointed about the state Egypt has reached … we have done nothing other than practicing our religion,” Hashimy told Al-Monitor.

The two Shiites are among many others detained and imprisoned, especially since the January 25 Revolution.

In 2013, during the reign of ousted Islamist President Mohammed Morsi, four Shiites — including high-profile Sheikh Hassan Shehata — were killed and 32 others were injured by angry extremist Salafists in Giza province. Shehata was a Shiite cleric who belonged to a Sunni conservative family. He converted to Shiism in 1996. Thirty-one defendants have been standing trial since then. A criminal court is expected to issue its verdict later in June.

The exact number of Egyptian Shiites remains a source of debate. However, some unofficial sources told Al-Monitor that they constitute about 1% of the population, roughly about 900,000 Egyptians.

“Egyptian Shiites don’t consider themselves a minority … we are a recognized sect in Islam, living in a Muslim country,” Hashimy said.

According to lawyer Amr Ezzat, who works with EIPR, the authorities in Egypt usually use this article of the law to prosecute members of religious minorities who don’t follow Sunni Islam or recognized Christian or Jewish sects.

“Originally there is religious freedom in Islam, but the Egyptian state does not recognize this fact … and even though the constitution guarantees religious freedom, this article has never been activated,” he said.

Ezzat said that the legal justification used against Shiites and other minorities is usually that of blasphemy and spreading extremist thoughts that are likely to influence social peace, despite the fact that “there is no specific article in the law that criminalizes Shiism.”

On May 16, a group of Islamic researchers launched research center Al-Aema (Islamic Imams), which aims to confront the spread of Shiism. Researcher Mohamed Abady said the center works on monitoring the state of Shiism not only in Egypt, but also in the Arab and Islamic world to show its dangers on the Sunni world.

“There is no problem that everyone practices [his or her] religion — the issue is the attempt to alter the political track,” Abady said. He added, “It is true they are a minority but minorities still have an impact on the countries where they exist, [as is] the case with the Houthis in Yemen.”

The Facebook administrator of the Egyptian Shiite Association, Ahmed Hagar al-Husseini, believes that this center was established by extremists to distort the image of Shiites.

“When you confront an ideology, you turn against everything that has to do with it, including what we and Sufis [who are Sunni] share about our love for the Prophet Muhammad and his family and our celebrations at their shrines,” Husseini told Al-Monitor.

According to Husseini, Egyptian Shiites are not allowed to establish mosques of their own or even hold gatherings or any ritualistic activities. They are also banned from founding Husseiniya, a public space to mark the martyrdom of Imam Hussein, the grandson of the prophet. Shiites maintain a low profile, practicing their rituals at home and visiting the shrines of Ahl al-Bayt (the family of the Prophet Muhammad) during annual birthday commemorations by Sunni Muslims, especially Sufis.

“We have no right to establish official institutions or organizations that represent us … and even if you find any, they are either unauthorized or operate as charity institutions,” Husseini said.

He added that he cannot publicly speak about being a Shiite or else he will be persecuted by the public, not just the authorities, recalling incidents of harassment he was exposed to in his neighborhood.

Even though Sunnis and Shiites agree on the core fundamentals of Islam, Shiite Islam has a different perception of Ahl al-Bayt to have special spiritual and political authority over the community.

Shiite Muslims believe that Imam Ali ibn Abi Talib, the prophet's cousin, should have ruled the Muslim world after the death of the Prophet Muhammad, instead of his companion Abu Bakr al-Siddiq, the first Muslim Caliph.

The Prophet Muhammad’s companions, fiercely criticized by the Shiites, are revered by Sunni Muslims, constituting the main point of disagreement between the two Islamic sects.

“We don’t condemn or insult them … there is a difference between condemnation and denying their right to govern the Islamic world … this is the foundation of our belief,” Husseini said.

Al-Azhar magazine, published by Al-Azhar, recently republished a 60-year-old book titled “The Outline of the Shiite Religion,” declaring Shiism a separate religion rather than an Islamic sect.

Based on the book that was written by late Islamic thinker Moheb Eddin al-Khatib, it is impossible for Shiites to reach common ground with Sunni Islam.

“We are not against Shiites themselves. We are against their religion that revolves around politics, claiming that the Prophet Muhammad’s companions usurped power,” Foud said.

The Egyptian media has frequently depicted Shiites as spies working for the benefit of Iran, receiving illegal funds from the predominantly Shiite country.

The head of Al-Aema Center, Mohamed Saber, said, “There are hidden cells loyal to and supported by Iran. That’s what the center is trying to confront.”

Nevertheless, Husseini begs to differ. “Egyptian Shiites don’t communicate with Iran or else they will be accused of high treason,” he said.

“Salafists in Egypt use the media against us to convince the Egyptian public that we are agents who help Iran influence the Arab world,” he added. “Nobody has the right to question our sense of belonging … we are patriotic Egyptians loyal to no other country.”