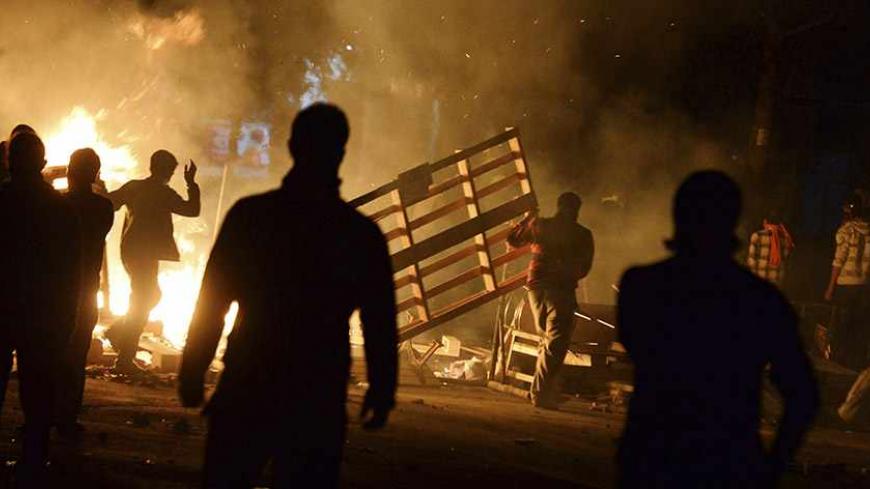 Demonstrators set barricades on fire as they clash with riot police during a protest in the mainly Alevi Tuzlucayir neighborhood of Ankara, Sept. 9, 2013, over a project whose blueprint envisages a Sunni mosque rising side by side with a new cemevi, or assembly house, to be used by Alevis. Billed as a symbol of peace between two faiths, the project has exposed wider sectarian tensions within Turkey. - REUTERS

ANKARA, Turkey — In November, a petty argument on a construction site in Bolu, northwest Turkey, abruptly turned violent as several dozen stick-wielding men swarmed on a small work team. “Strike the Communist Alevis!” Huseyin Dogan heard the assailants shout before a blow to the head knocked him unconscious. Not only did their employer do nothing to protect the Alevi workers, he unceremoniously laid them off the following day.

“It was all because of our [Alevi] identity. I thought they were coming to kill us,” Dogan, told Al-Monitor by telephone after a stint in hospital with a brain injury. “It was only our third day on the job. We didn’t even know those people.”

The attack in Bolu was the latest in a string of recent incidents that have stoked fears among Turkey’s long-ostracized Alevis that discrimination is creeping up to dangerous levels. Community leaders put the blame on Prime Minister Recep Tayyip Erdogan, charging that he is recklessly playing the sectarian card for political ends, keen to keep the ranks tight in his Sunni base. They say there is a systematic effort to vilify Alevis, coupled with a drive to purge them from the public sector. Some claim that discrimination has become so palpable in everyday life that many Alevis now worry not about their religious rights, but about simply keeping their jobs.

Estimated at about 15% of Turkey’s population, Alevis are no strangers to discrimination and violence. They were persecuted as heretics in Ottoman times over their distinct faith, which venerates the Imam Ali. A deep-rooted fear of Sunni bigotry has made the community a staunch defender of the secular republic. Yet Alevis have remained fixtures on the state’s watch list due to their strong leftist leanings and ethnically Kurdish segments. Dozens of Alevis perished in political massacres in the late 1970s, and more than 30 were burned alive in a hotel by an Islamist mob as recently as 1993.

Alevi leaders, however, argue that the discrimination has evolved into a more perilous form under the Justice and Development Party (AKP), with the government itself setting the tone.

“Never before did Alevis come under such extensive attack. … Enmity is fanned by the prime minister himself,” Selahattin Ozel, head of the Alevi Bektashi Federation, told Al-Monitor. “Previously, discrimination would be tacit. Now it is systematic and planned.”

Erdogan’s finger-pointing of Alevis began several years ago, when he implied that Alevi judges were responsible for the four-month jail term he served in 1999 for "Islamist sedition." In his 2011 election rallies, he referred frequently to main opposition leader Kemal Kilicdaroglu’s Alevi faith, and got him booed in this context.

Since then, Ozel argues, Alevis “have ended up being the scapegoat” in all three major issues that dominate Turkish politics: the Syrian civil war, the Kurdish peace process and the Gezi Park anti-government protests.

On Syria, Ozel points especially to Erdogan’s memorable statement after the May bombing in the border town of Reyhanli when he referred to the victims as “53 martyred Sunni citizens.” At a time when tensions were already high over spillover from the Syrian strife, the sectarian connotation was unmistakable.

Finally, Alevis joined en masse the anti-government protests that swept Turkey during the summer. All five demonstrators killed in the unrest were Alevis. On Nov. 25, Milliyet published a leaked police report that identified 78% of the demonstrators as Alevis, even though the protest movement had no sectarian theme. The report, based on a “sample group” of detainees, raised questions of why the police investigated sects and how they were able to count the Alevis. Many saw it as proof that the state — notorious for secretly profiling citizens it deems suspicious — has kept records of the entire Alevi population.

For Ali Kenanoglu, head of the Hubyar Sultan Alevi Culture Association, the survey represents more than the problem of secret records. He sees in it an attempt to recast the Gezi protests as an Alevi riot.

“The portrayal of the Alevis as a potential threat by the highest echelons of the state is translating into real, physical attacks in society,” Kenanoglu warned, pointing to the Bolu incident. He added, “It won’t stop here; it will spread to all realms of life unless Erdogan and the AKP step back from their current policy.”

Judging by media reports, incidents of Aleviphobia appear to be on the rise. Unknown people have been marking Alevi homes in various regions across Turkey, sometimes adding threatening graffiti. Press reports suggest that some public servants feel free to denigrate and mistreat Alevis — like the teacher who segregated Alevi and Sunni pupils in class and another who lectured that Alevism was “perverse,” or the inspector who questioned Alevi teachers about their faith and the police who sought out the names of Alevi students in schools.

Such incidents are often overlooked and dismissed as isolated. In Bolu, the governor denied that the attack on the Alevi workers was “ethnically or politically” motivated. He described it as a spat over work tasks, drawing reactions from Alevi groups and human rights activists.

The workers have since left Bolu, looking for work in another part of the country. Mazlum Dundar, another of the attacked workers, told Al-Monitor, “I no longer feel safe. The verbal harassment is turning into physical attacks. Maybe we should be bracing for worse.”

A major complaint Alevis raise is that young people applying for public jobs are systematically eliminated at the interview phase, no matter how well they perform in written exams. The judiciary, in particular, is said to have become completely off limits for Alevi aspirants. Alevi business people are allegedly sidelined in public tenders.

Kenanoglu concedes that such grievances are impossible to prove due to the very nature of the selection processes in question. He stresses, however, that they are at the very core of Alevi anger with the AKP, asking, “Why did the Gezi protests last longer in Alevi neighborhoods? Alevis were not in the streets to demand cemevis [Alevi prayer houses]. … They were out because they feel they face a problem of employment and livelihood amid mounting discrimination.”

With resentment running so deep, the government’s pledges to address Alevi grievances seem to have little effect. The longer Ankara drags its feet, the more its credibility shrinks. Not surprisingly, Erdogan’s occasional messages of fraternity, or his recent attempt at a charm offensive — a public declaration of a newborn grandson being named “Ali” — are met with no more than bitter smiles.

Ozel finds no solace in the reform promises, either. He counts on the majority of Sunni Turks refusing to buy the sectarian card.

“Thank God, Turkey’s Sunnis are not like those in Arab countries,” he said. “Otherwise, we would have long descended into a conflict.”