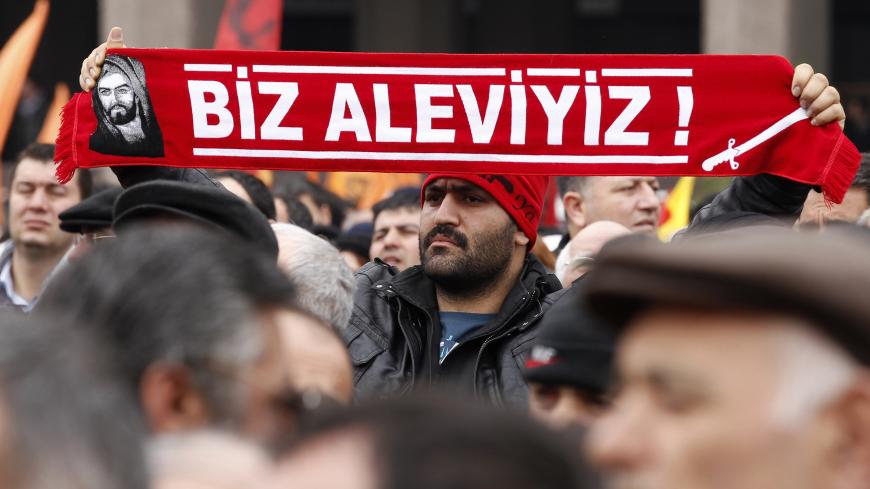 A protester holds a banner reading "We Are Alevi" as he and others wait to hear a court decision in front of a courthouse in Ankara, March 13, 2012. - Reuters/Umit Bektas

Turkey’s sizable Alevi community, which represents a distinct and often stigmatized branch in Islam, has won an important legal victory in its efforts to push the government to grant Alevi places of worship the same privileges that the mosques of the Sunni majority enjoy. In late November, the Appeals Court ruled that the state should meet the electricity expenses of cemevis, the Alevi houses of worship, just as it does for mosques. The ruling meant also an acknowledgment of the cemevi as a house of worship.

The ruling of the Appeals Court is important, but the problem is hardly a new one. A similar lawsuit had made its way to the European Court of Human Rights (ECHR) in 2016. The court’s Grand Chamber ruled that the Turkish state should meet the expenses of cemevis as well. Ankara, however, did not heed the judgment.

While the government failed to implement the ruling, Alevis did so in a de facto manner. Izzettin Dogan, the head of the Cem Foundation, a leading Alevi organization that initiated the legal struggle, told Al-Monitor that cemevis affiliated with the foundation stopped paying electricity bills in the wake of the European court’s ruling. “We have maintained that the state cannot discriminate between its citizens, both under its own laws and the ECHR ruling,” Dogan said. “Quite a lot of debt accumulated, and when the companies asked for payment, we would say, ‘Well, go ahead and cut off the electricity of the cemevis.’ They could not dare to go ahead as they knew they would confront the Alevis if they did. We are still not paying the electricity bills.”

That’s how the situation stands on the ground, but a legal guarantee remains important for the Alevis because, for them, this is not simply a question of expenses. The struggle they have launched with the electricity demand is, in fact, a struggle for a recognition by the state and, furthermore, a struggle for secularism.

In further remarks to Al-Monitor, Dogan said, “The ECHR ruling of 2016 was not implemented. The arrangement was necessary to maintain and strengthen internal peace [in Turkey], but no move has been made thus far. If the government fails to do what it has to do by the local elections on March 31, 2019, Turkey might face a more serious situation. Citizens could take certain actions to demand their rights, and we have occasionally warned the government on the issue. We do not want peace in the country to be disrupted in any way, no matter for what reason.”

According to Dogan, the Alevi struggle for rights amounts to a struggle for secularism amid growing criticism over political Islam against Turkey’s new presidential governance system that took effect in June. “We want to make sure that the republican principles, which have secularism as their linchpin, live on. Alevis feel they have a responsibility here,” Dogan said.

He added, “Mosques are being built all around, [and] they want to use mosques as a political tool. They want to have prayer rooms even in schools. This approach could lead to very unpleasant consequences. Ninety-five percent of the [Turkish people] are in favor of secularism. The current government acts with a singular understanding of Islam, carrying out activities that raise suspicion. This is irking the people.”

In such a political climate, the Appeals Court ruling recognizing cemevis as places of worship comes as a breath of a fresh air for the Alevis. Dogan hailed the ruling as a rare exemplary decision by the much-criticized Turkish judiciary but expressed pessimism that the government would abide by it.

Alevi pessimism is tangible on the political arena as well. Kemal Bulbul, an Alevi lawmaker for the opposition Peoples’ Democratic Party, is similarly concerned over political Islam.

“There is a single house of worship inside the [recently built] presidential complex, and it is a mosque. Why wouldn’t they build a church, a synagogue and a cemevi as well? This outlook alone speaks of the [government’s] one-religion approach,” Bulbul told Al-Monitor.

According to the lawmaker, the Religious Affairs Directorate (Diyanet), which enjoys a rapidly growing budget, has been tasked with conducting and protecting this singular approach to religion. Bulbul believes that the Diyanet “functions as a tutelage institution over all faiths in Turkey” and is thus unlikely to heed the Appeals Court’s ruling in favor of the Alevis.

Back in 2013, when he was still prime minister, President Recep Tayyip Erdogan had dismissed Alevi demands for the official recognition of the cemevi as a house of worship. “There is one house of worship in Islam, and it is the mosque,” he said. Then, in the run-up to the June 24 elections this year, Erdogan promised reform to meet Alevi demands. “We will continue to improve our democracy [and] will elevate it to an upper league. We will grant legal status to cemevis,” he said. In the six months since the polls, however, his pledge has not materialized.

Should Erdogan’s promise become true in the coming days, this would not only mean the satisfaction of Alevi demands but would also signify a choice by the new governance system between secularism and political Islam.