Turkey’s Syriac minority will soon start construction on their first new church in the country’s modern history, but not all Syriacs see a reason to celebrate. 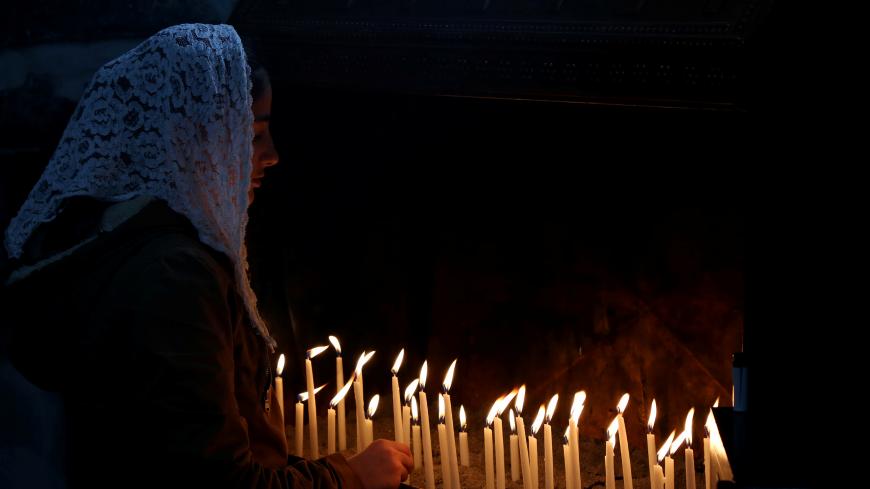 For the first time in modern Turkey’s 96-year history, a Christian minority is poised to begin construction of a new church with permission from the Justice and Development Party (AKP) government. As a result of the efforts of the Syriac community, a plot in Istanbul’s Yesilkoy district has been allocated to the Virgin Mary Ancient Syriac Church Foundation in the city for the project. The excitement ahead of the groundbreaking in March, however, is mixed with gloom among Syriacs over ongoing grievances in their ancestral lands in Mardin in Turkey’s southeast.

The church project reflects the century-old migration that scattered Syriacs across the world. Their exodus from Mardin began in 1915 after massacres under Ottoman rule and still continues today. Istanbul — the ancient home of Greeks, Armenians and Jews — is today also the home of a Syriac community that numbers about 18,000 people, according to Sait Susin, the head of the Virgin Mary Ancient Syriac Church Foundation.

In an interview with Al-Monitor, Susin explained how the need for a new church arose. “We have countless churches in the southeast but only one in Istanbul, which is not enough,” he said. “We have been conducting services in the churches of fellow communities, but the rituals differ and problems arise over service times.”

The effort to obtain a plot in Yesilkoy, where Istanbul’s Syriacs are concentrated, began seven years ago, Susin said, adding that the Istanbul Metropolitan Municipality, which is held by the AKP, has been helpful in expediting the process.

Yet the protracted process was not only due to red tape. The allocated plot had belonged to another Christian community. It lies inside the disused Latin Catholic Cemetery, where the last burial took place in 1950 before the place was seized by the state, like many other minority properties. After the treasury gave the plot to the Syriacs, discord arose between the Syriac and Catholic communities that was resolved in 2017 when Pope Francis stepped in and sanctioned the construction of a Syriac church.

Susin pledged the burial ground would remain intact. “The graves will be preserved. There is also a small chapel on the site and we will renovate and preserve this chapel as well,” he told Al-Monitor.

Turkey’s only Syriac parliament member, Tuma Celik of the People's Democratic Party, questioned why the ground of a Christian cemetery had been allocated for the new church when dozens of other plots were available in the city. “The church will be built on land previously usurped by the state. One could interpret this as a move by the government to offload a problem of its own on somebody else,” Celik told Al-Monitor. “Were the government sincere on this issue, it would have allocated one of the many treasury lands in the city. I would have respected that. But that’s not the case. The government is seeking to get rid of a problem while making a gesture to the Syriacs.”

According to Celik, that the construction of a new church is making news is in itself a sign of ongoing discrimination against non-Muslims in Turkey. “We are a people who had been living in these lands long before the Ottoman Empire and the Republic of Turkey were established. We are citizens with equal rights. There are thousands of mosques in Turkey and no permission is required to build a mosque,” the lawmaker said. “Yet building a Syriac church takes years and the construction of a place of worship for one of the country’s religious groups is making the news as if it is something extraordinary. This alone shows how oppressed the Syriacs are.”

And what about the fact that the first new church in republican history is being built under the AKP, whose policies espouse political Islam? “I hope this is not an election investment,” Celik said skeptically, referring to the March 31 municipal polls. “I hope the step that is being taken today does not prove empty as other rhetoric has in the past.”

Susin, however, disagreed. He praised President Recep Tayyip Erdogan for personally supporting the church project, stressing that the grievances of non-Muslim minorities had been alleviated under the AKP’s 16-year rule.

“When we asked for the allocation of a plot, the president offered serious support. Things progressed at his behest. Without his strong support, we might have failed to obtain the necessary permissions,” Susin said.

In further praise of the government, he said, “In the 1980s, for instance, monasteries in Mardin came to the brink of closure for teaching Syriac to Syriac children. Today, Syriacs have their official schools. Under the foundations law, passed in 2008, all our confiscated properties have been returned. In the latest economic package, the president handed over 55 churches, monasteries and cemeteries to non-Muslim foundations. Those are things that we could not have even imagined in the past. Previously, we were unable to get properties; now we can receive and make donations as we like. … I can say this has been the brightest period for minorities in republican history.”

The 71-year-old Susin has been a witness to much of Turkey’s republican history and, no doubt, his praise of the past 16 years is noteworthy. But not everyone feels the same, especially in the Syriacs’ ancestral lands in the province of Mardin.

Only about 3,000 Syriacs live in Mardin today, the result of an exodus fueled by the long-standing conflict between the Turkish security forces and Kurdish insurgents in the region.

Syriac activist Yuhanna Aktas is one of the few who still insist on living in their ancestral lands. The Mardin Syriac Unity Association, which he chaired, was shut down in the crackdown after the 2016 coup attempt that targeted not only the putschists but also oppositional quarters and civil society.

Aktas argued that little has changed for religious minorities in the AKP era and that discriminatory practices against Syriacs have resurged since 2009.

“Our oldest church is the Mor Gabriel monastery, which was built in 397. The confiscated monastery was comprised of 30 pieces [of land], and only 12 of them have been returned. The lawsuits for the remaining lands are continuing. The usage rights of hundreds of churches, monasteries and cemeteries have been handed over to [the Religious Affairs Directorate],” he said.

For Aktas, “Confiscating churches and then returning them and building a new church after the confiscation of so many churches in the country is not ethical and moral.”

Celik, meanwhile, noted that the new church in Istanbul should be described as the first church to be officially built since the proclamation of the republic in 1923. He explained that decades ago, a church in Mardin was built but never officially registered after the area where the Mor Sherbel church stood was declared a military zone in 1950 and the church itself was demolished.