The indictment of a monk on terrorism charges and the mysterious death of an elderly woman has shaken one of the world’s oldest Christian communities as it celebrates Easter during the coronavirus pandemic. 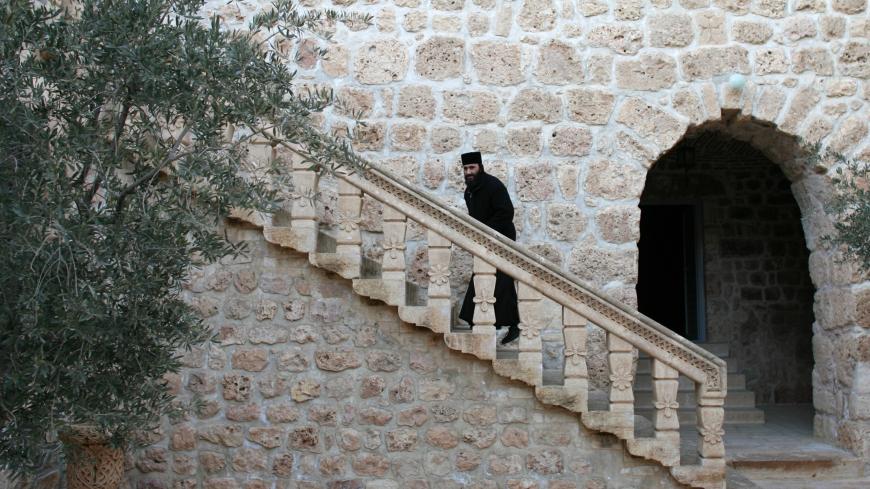 A Syriac Christian monk walks up the steps at the ancient monastery of Mor Gabriel, 15 kilometers (9 miles) from Midyat in southeastern Turkey, Jan. 13, 2009. - Reuters/

MIDYAT, Turkey — The lone priest tending a remote monastery in southeastern Turkey gave uninvited visitors food and water when they darkened his door in 2018. The men were Kurdish militants, authorities said, and for his act of charity, Sefer Bilecen now faces charges of terrorism.

The case against Bilecen, 44, has rattled the tiny community of 5,000 or fewer Christians still living in their ancient homeland near the borders with Syria and Iraq. Most of their brethren have left since the 1950s, fleeing poverty and a long-running conflict between the Turkish state and Kurdish fighters. At the height of the insurgency in the 1990s, dozens of Syriac Christians were assassinated by unknown gunmen.

When a fragile peace was restored, Syriacs, who are also called Assyrians, began returning in the mid-2000s to reclaim ancestral lands and centuries-old churches. Thousands more make annual pilgrimages to family homes and holy sites. Churches in the main town of Midyat and nearby villages stood mostly empty as the coronavirus pandemic kept the faithful away when the Orthodox Christians celebrated Easter today.

“Syriacs have a deep bond with these lands that has not been severed, despite living for years in diaspora,” said Tuma Celik, who is Syriac and one of a handful of non-Muslim lawmakers in Turkey’s parliament. He estimated that Europe is home to about 300,000 Syriacs with roots in Turkey. One of the Middle East’s oldest indigenous cultures, Assyrians are also abandoning Syria, Iraq and Iran amid the strife of recent decades.

About 25,000 remain in Turkey, mainly in Istanbul. Most belong to the Syriac Orthodox Church, while smaller numbers are Catholic and Protestant. Those living in Tur Abdin, which translates as “the mountain of the servants of God” in Aramaic, still speak a dialect of the language of Christ.

The region has been plagued by a 35-year conflict with the armed Kurdistan Workers Party (PKK) that has killed more than 40,000 people, mainly Kurds. Fighting has largely subsided since an outbreak of violence in 2015 and 2016, but the government has continued to restrict political expression, firing opposition mayors and erasing signs of their multicultural platform.

Syriacs “have been trapped between two sides in a fight they are not party to,” said Celik, who is a member of the Peoples’ Democratic Party, whose base is overwhelmingly Kurdish and is the target of the political crackdown.

Fears for Syriacs' safety were reignited when an elderly couple vanished from their far-flung village near the Iraqi frontier in January. Snow-covered passes hampered the search, and the body of Simuni Diril, 65, was found near her home late last month. Her 71-year-old husband, Hurmuz Diril, remains missing.

The Dirils in 1995 were forced out of their village of Kovankaya, or Mehr in Aramaic, set beneath a sheer cliff where traces of a long-forsaken monastery are still visible. The family returned in 2010 to rebuild their home and raise bees and goats, their son Remzi Diril, a 38-year-old priest at Istanbul’s Chaldean Catholic Church, said in an interview before Simuni Diril’s remains were discovered.

The village’s only other inhabitant said armed men dressed like PKK fighters took the couple, Remzi Diril said. But mystery surrounds her death, and investigators have classified the case as secret.

The Dirils’ disappearance “shows how unprotected we are,” said an Assyrian woman from Midyat who declined to give her name. “For centuries, there hasn’t been real peace, and there have been great disasters, like in the 1990s or 100 years ago.”

The century-old calamity she referred to is Seyfo, or the Year of the Sword, in 1915 when 250,000 Syriacs were massacred by Ottoman forces during World War I. Armenian Christians perished in even greater numbers in what both groups call a genocide.

The legacy of that violence is difficult to conjure now in Tur Abdin, where emerald-green meadows are ablaze with the pink flowers of almond trees in early spring. Some 80 monasteries, most in ruins, dot this highland situated between the Euphrates and Tigris rivers.

Mor Yakup d’Qarno, or St. Jacob of the Horn, is a burst of bright sandstone atop a high ridge on the slopes of Mount Izla, whose famed wines are mentioned in the Old Testament. Little has been written about the monastery, said to date back to a rock-hewn church from the 6th century.

The site was off-limits in a military zone for two decades, and the Church was only able to start its restoration in 2011. The British-educated Bilecen became its abbot two years later, tilling the soil to grow his own vegetables and caring for the secluded complex without state protection.

Bilecen has said the teachings of Christ compelled him to help the strangers when they stopped at the monastery. Security forces waited 16 months to detain Bilecen for five days in January after an anonymous tip that the men were PKK fighters.

Bilecen was indicted for membership in a terrorist organization; if convicted, he faces up to 12 years in prison, his lawyer said. The start of his trial in March was postponed, along with other legal proceedings in Turkey, during the COVID-19 outbreak.

Celik said Bilecen’s case reflects the mixed record on non-Muslims in Turkey, home to 100,000 Christians and fewer than 20,000 Jews out of a population of 82 million. Both the European Union and the United States say Turkey fails to protect the rights of its minorities and ensure religious freedom. The US-based Christian watchdog Open Doors ranks Turkey 36th on its list of 50 countries where Christians face persecution.

The government has taken some steps to improve the plight of Syriacs, granting them permission to operate a kindergarten and build a church in Istanbul, the first since the Turkish Republic was created in 1923, and returning some monastic properties that were seized by the state.

Yet Syriacs are barred from opening other schools or training clergy and, like other minorities, their religious leaders have no legal status, making it difficult for them to manage property. Celik said he suspected that Bilecen’s arrest occurred without the initial knowledge of officials in Ankara, but that the lack of safeguards “creates a vacuum that certain circles, which do have the support of the state, can exploit.”

For all of the hardship, the lure of the land has brought Syriacs back to some 20 settlements in Tur Abdin over the last decade and a half. Among them is Ishok Demir, 30, who runs a popular pizzeria in Midyat. He came with his parents and younger brother in 2006 from Switzerland to Kafro, or Elbegendi in Turkish, which his grandfather was the last resident to leave in 1994.

Since then, Kafro’s 30-odd residents restored a church and a chapel and cultivate grapes, almonds and figs in gardens beside stone houses. When fighting with the PKK flared across the southeast five years ago, the sounds of explosions in the city of Nusaybin, some 20 miles away, reverberated here. Helicopters circled above, and military convoys rumbled through the village.

“We were scared, but we never thought to go,” Demir said. “We returned so that others could also come back. So I will stay. My home is here. Our roots are here.”