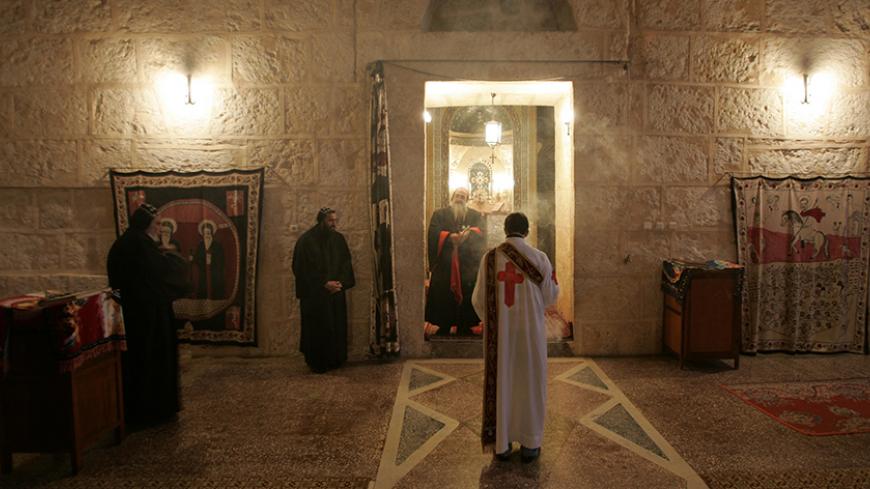 Syriac Christian monks attend a service at the ancient monastery of Mor Gabriel, 9 miles away from the town of Midyat, Turkey, Jan. 13, 2009. - REUTERS/Umit Bektas

A legal battle over the ownership of dozens of churches, monasteries and other property in southeastern Turkey has embroiled one of the world’s oldest Christian communities.

Turkish authorities have seized approximately 50 properties, totaling hundreds of thousands of square meters, from the Syriac Orthodox Church on grounds their ownership deeds had lapsed, church and community leaders said.

An appeal by the fifth-century Mor Gabriel, one of the oldest working monasteries in the world, against the confiscation was rejected in May by a government commission charged with liquidating the assets.

Among the properties are at least two functioning monasteries erected 1,500 years ago, said Kuryakos Ergun, the chairman of the Mor Gabriel Monastery Foundation. The loss of these monuments threatens the survival of one of Turkey’s oldest indigenous cultures.

“Our churches and monasteries are what root Syriacs in these lands; our existence relies on them. They are our history and what sustains our culture,” Ergun said. “While the country should be protecting this heritage, we instead see our culture is at risk.”

Syriacs, sometimes called Assyrians, are heirs to a civilization in historical Mesopotamia that dates back as far as 3500 B.C., and many today still speak a dialect of Aramaic, the language of Christ. Most are Orthodox, but Syriacs belong to different Christian denominations.

Their homeland of Tur Abdin, which translates as the Mountain of the Servants of God, is situated on a high plateau between the Tigris and Euphrates rivers and is studded with more than 80 monasteries, most in ruins as a number of Syriacs have fled to Europe to escape poverty and persecution over the past half-century.

For years, the titles of the properties now in question had been listed in the national land registry as belonging to villages where Syriacs lived. When those villages were incorporated as neighborhoods in the newly established greater municipality of the city of Mardin in 2012, their legal status was dissolved — along with their ability to own property, said Erol Dora, who is a Syriac and one of a handful of Christian lawmakers in the Turkish parliament.

Last year, the liquidation commission began transferring to state institutions assets whose status it had determined were no longer valid following the municipal reform. Among them were dozens of houses of worship, cemeteries and other properties used by the Syriac community for centuries that should have been turned over to Mor Gabriel, Dora said.

Dora has submitted a parliamentary question to the prime minister in the hope of fostering a political solution to a problem that he sees as part of Turkey’s wider failure to enshrine the rights of its minorities.

“Turkey must adopt policies that protect citizens of different faiths. This has to be part of efforts to comply with modern democratic principles and rule of law,” said Dora, who represents Mardin as a deputy in the opposition Peoples’ Democratic Party.

In the meantime, graveyards have been redistributed to the Mardin municipality. Several churches and monasteries that were handed over to the state Treasury have been given to the Department of Religious Affairs (Diyanet), a powerful state institution that oversees Muslim houses of worship, Dora and Ergun said.

The fifth-century limestone Mor Meliki, a monastery set beside a spring revered by pilgrims for its healing powers and tended by two Syriac families, is among those properties reallocated to Diyanet, Ergun said.

An official at the religious affairs office in Ankara denied that it had been given the properties, saying it had received no official notice of the matter.

However, a copy of a document purportedly provided by Mor Gabriel to members of the community show the Diyanet is listed as the recipient of several properties.

Turkey has taken some steps in recent years to improve conditions for Syriacs, including allowing the community to open its first school in nine decades.

Community leaders have said that early in the Syrian conflict, President Recep Tayyip Erdogan, then prime minister, invited the Syriac Orthodox Patriarchate to return to Turkey, its seat from A.D. 37 until Turkey expelled it to Syria in 1925. The move did not materialize.

The expulsion followed the massacres of as many as 250,000 Syriacs by Ottoman forces during “Seyfo,” or the Year of the Sword, in 1915. Armenians were killed in even greater numbers in the chaos of the Ottoman Empire’s collapse during World War I in what both groups call a genocide.

Violence between the Turkish army and Kurdish militants that erupted in 1984 forced the descendants of survivors to flee Tur Abdin, reducing the Syriac population to 3,500 or so from more than 50,000 in 1950, according to researchers. Istanbul is home to fewer than 20,000 Syriacs.

The latter-day fight over land may be bloodless, but for some Syriacs, it is evidence they are still not welcome.

Mor Gabriel is entangled in other property disputes with the state. In 2013, Erdogan pledged to return 30 parcels of land taken from the monastery, but Ergun said less than half have been restored.

Families seeking to reclaim gardens, farms or homes occupied by Muslim neighbors or arbitrarily redistributed during an overhaul of the national land registry in recent decades face yearslong court battles that can deplete their savings and incur the ire of the wider community, said Tuma Celik, who heads Turkey’s branch of the European Syriac Union and is the editor of the Syriac newspaper Sabro.

He estimated the amount of disputed property measures in the millions of square meters and worries that the legal wrangling discourages the trickle of Syriacs who have begun to return to Tur Abdin to tend ancestral vineyards and fields. In the summer months, the population of Syriacs can swell by as many as 10,000 people.

“The hope that we have cultivated in recent years that this remains our homeland is fracturing. Instead, the message we hear is to leave,” Celik said.