Turkey’s tiny Assyrian community views a jail term handed to an Assyrian priest on “terrorism charges” as an official strong-arming tactic, while Assyrians around the world call for dismissal of the case. 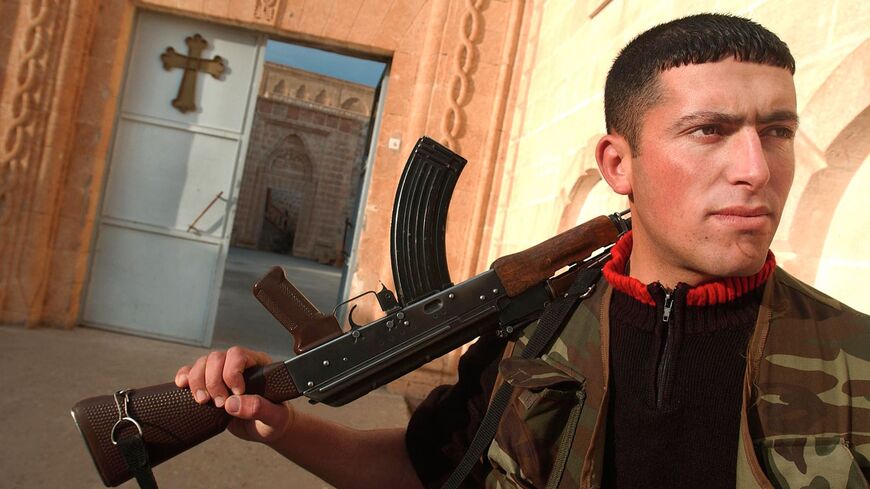 A Muslim Turkish soldier stands guard outside the Mor Gabriel monastery on Jan. 11, 2003 in Midyat, Turkey. The soldier was part of a bodyguard unit for some high-ranking Turkish army officers visiting the ancient monastery. The 1,600-year-old Mor Gabriel is located in a part of Turkey that was one of the orginal cradles of the Christian church. - Chris Hondros/Getty Images

A Turkish court verdict that sentenced an Assyrian monk to a prison on terrorism charges has set off an outcry among the Assyrian communities and civic groups across the world, yet Turkey’s Assyrian community remains mostly silent. Their silence reflects the tiny community’s fears and concerns.

The life of Assyrian priest Sefer Bilecen, who heads a historic monastery in Turkey’s predominantly Kurdish southeast, drastically changed after two men appeared at his door in 2018. Turkish authorities identified the two men who asked for food and water from the priest as outlawed Kurdish militants in January 2020 and detained the priest. Bilecen was released pending trial. Earlier this month a local Turkish court sentenced him to two years and one month in jail for “aiding and abetting terrorists.” Bilecen will remain out of jail until the end of the appeal process, but the ruling left Turkey's some 5,000 Assyrians heartbroken.

The history of the Mor Gabriel Monastery, which harks to the fourth century, also sheds light on their disappointments and fears. The monastery is in the Tur Abdin region, which translates as “the mountain of the servants of God” in Aramaic, a dialect of the language of Christ. After serving Assyrians for many centuries, the monastery was left in ruins in 1915 when 250,000 Assyrians were massacred by Ottoman forces during World War I along with more than 1 million Armenians.

“They sent whatever they could save from their factory work wages, from their labor and bread,” Aktas said. “The monastery was rebuilt by collective work.”

After the monastery opened its doors again in 2013, the British-educated Bilecen became the first priest of the monastery in the history of the modern Turkish republic. Bilecen is known as “Priest Aho” by the local people of Mardin, the province where the monastery is located.

Aktas said the region is at the heart of the direct clashes between Turkish security forces and the armed Kurdistan Workers Party (PKK), which Turkey and many Western powers consider a terrorist organization.

The chain of events that carried the monastery to international focus had begun on an ordinary day in 2018 when two militants appeared on the door of the edifice, asking for food and water from Bilecen. Some 15 months later the Turkish authorities, acting on an anonymous tip that the men were Kurdish fighters, detained Bilecen for five days.

Local and international news reports, citing the priest’s earlier testimonies, said Bilecen helped the uninvited visitors out of his faith and charity.

In his testimony before the court, Bilecen said he told the men to leave the area and then went back to the monastery and closed the door.

The chairman of the Mor Gabriel Monastery Foundation, Kuriakos Ergun, said the church receives dozens of such visitors on a daily basis. “The priest cannot ask for identification from all of them,” Ergun told Al-Monitor. According to Ergun, when Bilecen realized they were not civilians, he asked them to leave.

Ergun said the court did not take the priest’s account into consideration.

“The court charged the priest with aiding and abetting the organization [PKK]. Can a priest aid and abet the organization? Why would he be a priest if he was going to betray his own values?” Ergun asked. “He has devoted himself to God and the monastery, he has no other purpose than serving visitors. What could he gain from it?”

Saying that the ruling has exacerbated the fears of the Assyrian community in Turkey, Ergun added, “Sentencing a priest not only hurts the Assyrians but it will not go over well for our country.”

Aktas said, “Up until now, there weren't any actions against the spiritual figures.”

According to Kemal Yalcin, an author of several books about Turkey’s Assyrians, the court ruling reflects the tip of the iceberg. He said oppression against Assyrians in the region has escalated since 1980.

“In 1981, soldiers raided Mor Gabriel Monastery and assaulted the priests. Sixty-seven Assyrians who refused to leave their villages were murdered between 1980 and 1997. Churches were shut down, many Assyrians migrated to Europe,” he said.

He recounted that Assyrians who had left Turkey were invited back to their hometowns around the turn of the century by then Prime Minister Bulent Ecevit.

“Some returned and rebuilt their lives. What happened today is happening in order to stop more from coming back,” he added.

Meanwhile, a petition campaign to release Bilecen brought global attention to his plight. According to his lawyer, it is very unlikely that the priest would serve time in a prison until the end of the appeal process. Assyrian communities abroad have also managed to carry their concerns to the Swedish parliament and initiated petitions in three different languages titled “Free Priest Aho.” More than 4,000 people signed the petition in the first couple of days.

“We want this case to be dismissed. Assyrians in Europe must generate pressure over Turkey and call for an end to this unlawful action,” Aktas said.