Saudi Arabia Clamps Down On Dissent

Haytham Mouzahem asks whether recent Saudi actions are tied to efforts to quell sectarian dissent and contain any spillover from either the Shiite-based uprising in Bahrain or the Syrian crisis. 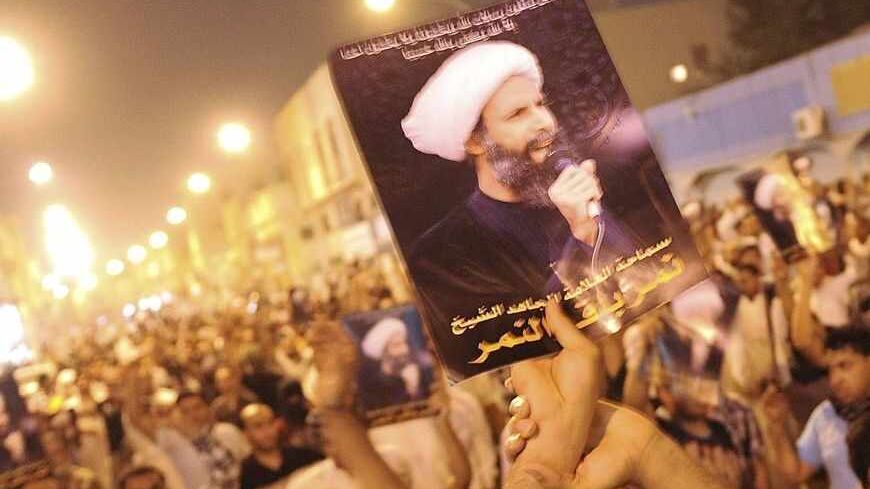 A Saudi protester holds up a picture of Sheikh Nimr al-Nimr during a July 8, 2012, demonstration in Qatif against the Shiite cleric's arrest. A Saudi prosecutor has called for Nimr's conviction and crucifixion. - REUTERS

Sheikh Nimr Al-Nimr, a Saudi senior Shiite cleric, appeared in court this week in Saudi Arabia, while the Shiite community in the kingdom and human rights associations raised concerns about the fairness of his trial.

A month ago, a Saudi prosecutor demanded the death penalty — by crucifixion — for the prominent cleric, who was accused of inciting sectarian strife and terrorist offenses and “insulting the leaders of the Gulf states and (Wahhabi) clerics.”

The proposed death sentence caused an eruption of protests among Nimr’s supporters in Qatif and al-Ahsa  and also from Shiite and human rights groups abroad.

Prince Nayef had served as minister of interior since 1975. He was a conservative figure and the patron of the religious police (The Committee for the Promotion of Virtue and the Prevention of Vice), and took severe actions against Shiites.

A source close to the Saudi opposition told Al-Monitor that another reason behind Nimr’s arrest was that he suggested, in 2009, the secession of Eastern province if Shiite rights were not respected. Nimr stated in his sermon at that time: “Our dignity has been pawned away, and if it is not ... restored, we will call for secession. Our dignity is more precious than the unity of this land.” This sermon came as a reaction to religious discrimination against Saudi Shiite visitors to the tomb of the daughter of the prophet in al-Baqi near Medina in February 2009.

However, Nimr’s brother, Muhammad al-Nimr, said the country’s radical Wahhabi wing was the instigator of his brother’s detention, explaining that the sheikh’s secession call for Eastern province was conditioned on the recognition of Shiite political and religious rights. Muhammad al-Nimr said his brother "had been wanted by the Interior Ministry for a couple of months because of his political views."

Sheikh Nimr, as a senior figure of the Shiite opposition, played a vital role in Shiite protests in Eastern province during 2011–2012. Suppression of the protests resulted in 15 deaths and the detention of dozens.

As a result of the Islamic revolution in Iran, Iraqi cleric Ayatollah Mohammad Shirazi (1928-2008) formed a revolutionary organization in 1979 to promote the Islamic revolution in Iraq and the Arabian Peninsula. Shortly afterward, Sheikh Hassan al-Saffar, another senior Saudi Shiite cleric in Qatif who was a follower of Shirazi, formed the Organization of the Islamic Revolution in the Arabian Peninsula as a Saudi branch of Shirazi’s Organization of Islamic Action to oppose the Saudi regime. Saffar and his comrades escaped from the kingdom to Iran following the 1979 Muharram uprising in Qatif, and they remained for more than a decade in Tehran and London until there was a reconciliation with the Saudi regime in 1993. Then, most of those Saudi activists returned to the kingdom.

After Shirazi died in 2008, his followers split into four main currents. They include:

• Al-Saffar current: Due to political differences with Shirazi’s organization and the Iranian leadership, Saffar left the Shirazi movement and has been following the moderate Shiite Grand Ayatollah Ali al-Sistani. Saffar’s grouping has become the most influential current and is seeking reform, tolerance and openness. This group wants to see the end of discrimination against Shiites and the improvement of environmental, economic and social conditions in Qatif and al-Ahsa.

• Al-Nimr current: This is the main Shirazi following in Saudi Arabia, and is headed by Sheikh Nimr, who has differences with Saffar’s position toward the Saudi regime. Nimr was described as radical while Al-Saffar,  described as moderate, has opened a dialogue with authorities.

• A third current is called the London opposition because its activists have been based in London. Its main figures are Hamza Hassan and Fouad Ibrahim. This group has refused to take a restrained approach with Saudi officials, which it says did not respect a 1993 agreement with the Shiite opposition to grant it religious and political rights, end religious and socioeconomic discrimination and promote political reform in the kingdom. The London opposition has criticized Saffar’s more quiet approach and his dialogue with the regime, particularly in light of the government’s lack of follow-through on the agreement. Hassan and Ibrahim, after returning to Saudi Arabia following the 1993 agreement, later returned to London. They remain outspoken critics of the Saudi regime and of the Shiite community’s leaders, arguing that they have proven too accommodating and were unable to secure any social and political concessions from the government.

Ibrahim told Al-Monitor that it is not fair to limit the Shiite opposition to the Saffar and Nimr currents, indicating that there are other groups and points of view. He noted his differences with Saffar’s group.

There are also other Shiite currents, such as the traditional apolitical grouping, in addition to the “imam’s line” current of “Velayat Al-faqiq,” “Hezbollah of Hejaz” and “Hizb al-da’wa al-Islami.”

Ibrahim announced the launching of a Saudi opposition TV channel on Friday, based in Beirut.  The Al-Nabaa (News) channel comes as a sign of the escalation between the Shiite opposition and the regime. To understand Saudi Arabia’s fear of opposition media, it is important to mention that the Saudis’ first condition in its deal with the opposition was the closure of its London magazine Aljazira Al-arabiya.

Ironically, there were rumors last month that Saudi authorities had placed the more moderate Saffar under house arrest at a hotel in Riyadh for three weeks after he received a formal request to meet with Interior Minister Mohammed bin Nayef. Sheikh Saffar’s brother Mohammed al-Saffar said on his Facebook page that Saffar was under house arrest at a hotel in Riyadh and that Prince Mohammed bin Nayef was not allowing him to return to Qatif until the meeting took place. Saffar finally returned to Qatif on April 23 after meeting with the interior minister.

The meeting came after more than 170 prominent figures in Eastern province, including Saffar, signed a statement sent to the Ministry of Interior that rebutted the allegation that 16 Shiite intellectuals and clerics were involved in an “Iranian spy network.” Tehran denied that it was linked to spying in Saudi Arabia.

The question arises whether these and other recent Saudi actions are linked to efforts to contain spillover from either the Shiite-based uprising in Bahrain or the Syrian crisis.