Al-Qaeda's attempted assassination of Saudi Prince Mohammed bin Nayef in 2009 appears to have ultimately brought the prince down in 2017. 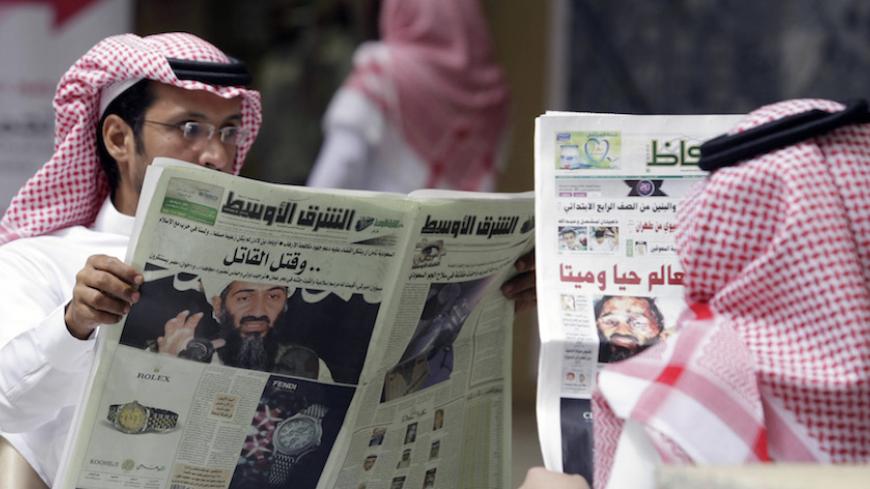 Al-Qaeda has upped its ideological challenge to Saudi Arabia with an attack by Hamza bin Laden on the royal family's legitimacy. This comes as the group's failed 2009 attempt to assassinate their Saudi nemesis, Prince Mohammed bin Nayef, ironically appears to have provided the pretense for his demotion from crown prince.

Al-Qaeda declared war on the Saudi royal family 15 years ago with a call to revolution by Osama bin Laden that precipitated the most serious and dangerous violence in the modern kingdom since its founding. Terror attacks hit every major Saudi city. Only after a prolonged counterterrorist campaign led by Mohammed, then interior minister, was al-Qaeda suppressed.

Bin Laden's favorite son has now issued two audio messages attacking the royal family. The first, released a year ago, hailed lone-wolf terror attacks and called for an uprising in the kingdom. The most recent recording is a history lesson and was issued by al-Qaeda's media arm, as-Sahab, from its hideout in Pakistan. In the message, Hamza charges that the founder of the modern Saudi kingdom, Abdul-Aziz bin Rahman Al Saud (Ibn Saud) was a British agent. Ibn Saud allegedly worked with the British to weaken the Ottoman Empire and its tribal ally in the Arabian Peninsula, the Rashids.

Hamza notes that when World War I began, the British sent an emissary to Ibn Saud, Capt. William Henry Shakespear, to propose a formal alliance against the Ottomans and the Rashids. Shakespear was later killed in a battle with the Rashids. Hamza charges that the Saudis betrayed Islam by working with the “crusaders” against the Ottoman caliphate. They were doing the bidding of the “crusaders,” who used the breakup of the Ottoman Empire to create Israel.

Hamza is being groomed by al-Qaeda to become its future emir, and his image as the heir apparent to his father is smart political theater. It is deeply ironic that al-Qaeda's attack on Mohammed bin Nayef has now come back to haunt the one-time Saudi heir apparent.

According to multiple press reports based on interviews with the prince's supporters, King Salman confronted Mohammed with the accusation that the failed attempt on his life had left him addicted to painkillers. One account said that Mohammed still has shrapnel from the attack in his body. The painkillers, it was alleged, were impairing the prince's judgment.

Saudi authorities have denied the reports, but have provided no alternative explanation for Mohammed's removal from the line of succession and command of the Interior Ministry. Al-Qaeda and bin Laden finally got revenge for Mohammed's campaign against them.

Mohammed's demotion has also led to a shake-up of the Saudi security establishment. The head of the Royal Guard has been dismissed and replaced without explanation, and the Interior Ministry is being reorganized. A few royal family members have openly criticized Mohammed's ouster, including Abdel-Aziz bin Fahd, son of the late King Fahd. Mohammed has not spoken in public since his dismissal and is said to be under house arrest.

At the moment, the new crown prince, Mohammed bin Salman, is keeping watch over the kingdom as his father, King Salman bin Abdul-Aziz Al Saud, is on his annual vacation in Tangier, Morocco. As is normal when the king travels abroad, he deputized his heir to run the kingdom in his absence. Salman has rented more than 800 hotel rooms in Tangier for his entourage. He is expected to meet with foreign leaders while in Morocco, including French President Emmanuel Macron, German Chancellor Angela Merkel and Jordanian King Abdullah. There is speculation, meanwhile, that Salman may abdicate and put his son on the throne.

Although Mohammed bin Salman is in charge at home, the line of succession is incomplete. Salman has not named a successor to the post of deputy crown prince that his son previously held. There is no rule requiring that a deputy crown prince be appointed if the king is fit. Abdullah kept the position open for some time after he ascended to the throne. It is also very unlikely that Salman will pick someone older than Mohammed bin Salman — age still matters in the Saudi system — and there is no obvious younger 20-something prince ready for the No. 3 slot. It can be left open for the meantime, but not if the king intends to turn power over to the No. 2. The necessary predicate to any possibility of Salman abdicating is for him to choose a new deputy crown prince and thus the putative successor to his son.

Al-Qaeda will no doubt test the new security team in Riyadh. Cells of al-Qaeda in the Arabian Peninsula remain active, and as-Sahab will go after the legitimacy of the new crown prince, painting him as unqualified for the throne. The kingdom is facing a complex and interrelated series of challenges with deadly enemies.