Saudi Arabia gives US President Donald Trump the fully rolled out red carpet treatment in hopes of getting heightened US action against Iran. 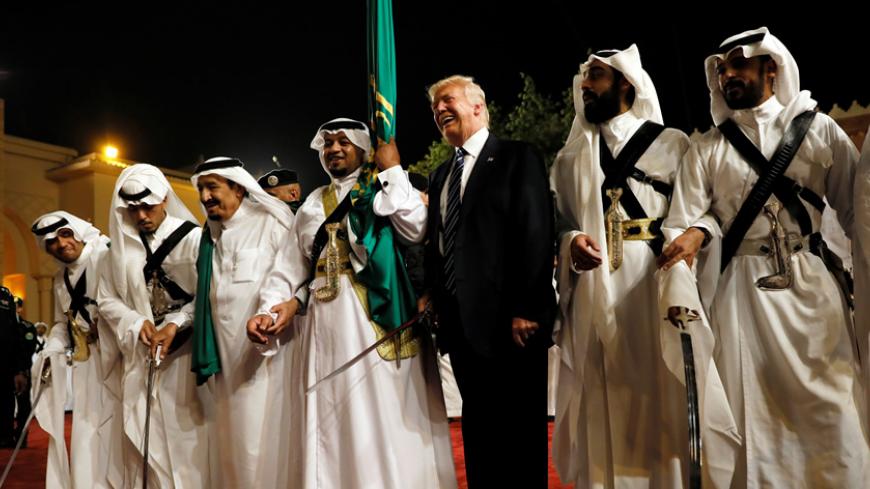 US President Donald Trump dances with a sword as he arrives to a welcome ceremony at Al-Murabba Palace in Riyadh, Saudi Arabia, May 20, 2017. - REUTERS/Jonathan Ernst

The House of Saud played Donald Trump like a fiddle on his historic visit to the kingdom, showering him in ceremony and accolades that pandered to his scandal-wracked administration's need for diversion from its own self-imposed mistakes. For the Saudis, it was also a diversion from their own blunders, especially the expensive and endless quagmire they created in Yemen.

As an absolute monarchy, the kingdom is proficient at the business of pomp and ceremony. The ornate palaces, not open to the public, provide perfect backdrops. After being severely unhappy with the last two American presidents, George W. Bush and Barack Obama, they wanted to demonstrate their high hopes for the Trump team. The royals know that flattery will bring rewards, especially when the target is desperately seeking to be seen as competent. They expect a more aggressive approach to combating their archenemy Iran, which has outmaneuvered them from Beirut to Basra for years.

The presidential visit also gave King Salman bin Abdul-Aziz Al Saud the opportunity to demonstrate the enormous convening power of the Custodian of the Two Holy Mosques in the Sunni Muslim world. With control of access to Mecca and Medina for pilgrims, the king literally controls access to a holy obligation of every Muslim. With decades of financial largesse, the kingdom has built a network of mosques and other institutions across the Sunni Muslim world that are dependent upon Saudi favors. The Saudis could invite their fellow monarchs from the Gulf Cooperation Council for a summit with the president and dozens of other Muslim leaders for another summit, confident that most would come when called.

Salman demonstrated he is still very much in charge. His speech to the Muslim summit was an aggressive call to confront Iran and blamed Iran for decades of terrorism and subversion. Of course the Saudi leadership is not interested in fighting Iran with Saudi troops. That is the Americans' job.

The red carpet treatment for Trump, however, was often more show than new substance. The billions in arms deals and other economic agreements signed were almost entirely letters of intent, not final contracts, and most had been in the works for some time. Given the price of oil, it remains unclear how the Saudis can afford them. The medal the king awarded to Trump was the same medal King Abdullah gave Bush and Obama.

The Saudis were willing to risk some embarrassment to curry their guests' favor by letting him address the Muslim world on Islam from the summit. In the end, the president delivered a carefully worded message that was long on rhetoric and short on specifics. He did denounce the Iranian government and all but called for regime change in Tehran — music to the king's ears. He did not discuss Saudi Arabia's decades of promoting intolerance and extremism in the Muslim world. Human rights and gender equality were given little attention. The focus was on the Muslim world uniting behind Washington and Riyadh against terrorism and Iran.

The king's signature policy initiative of his 2½-year reign is the war in Yemen. Defense Minister Prince Mohammed bin Salman, the king's favored son, promised a decisive victory 25 months ago but the war is still a stalemate. The Saudis have avoided putting their own ground troops into offensive operations against the Houthis and former President Ali Abdullah Saleh for fear of embarrassment if they underperform. The Royal Saudi Air Force has performed above expectations, but the air campaign has not defeated the rebels nor halted their missile attacks on the kingdom. A missile was fired at Riyadh just as Air Force One left the United States but was intercepted by Saudi defense forces.

Now there are growing signs of a split emerging in the coalition the Saudis created to fight the war. The Saudi-backed government of President Abed Rabbo Mansour Hadi has been struggling to gain control of Aden airport, the largest in the territory Hadi claims, from Yemeni militias backed by the United Arab Emirates (UAE) since February. The Saudis even sent in Sudanese troops — one of their most loyal and well-paid allies — to take the airport but without success. The tense standoff between rival factions makes the city a powder keg.

Riyadh and Abu Dhabi are also backing rival Yemeni tribes in the Hadramuat, the homeland of the bin Laden family in eastern Yemen. The Saudi monarchs have craved control of the Hadramuat since the 18th century as a direct access to the Indian Ocean, but the Emiratis put their own troops (many of them mercenaries) on the ground to wrestle it from al-Qaeda. The Emiratis are disenchanted with Hadi, who has been unable to rally support for over two years while the Saudis remain tied to the man they helped elect.

The Saudi plan to win in Yemen hinges on their proxies' taking Hodeidah, the major port in the north. The goal would be to tighten up the blockade of the country that is producing mass famine and outbreaks of disease. The UAE is reportedly unexcited by the operation.

The Trump administration is ultimately going to determine whether the Hodeidah battle is fought. The president's speech barely mentioned Yemen and never dealt with the humanitarian carnage there. Unlike Salman, Trump did not highlight the Iranian role in Yemen.

The Saudi war effort is dependent upon US support. Congress is increasingly opposed to giving Salman and his son a blank check for a war that is causing massive humanitarian damage to the Arab world's poorest country. Some on the Hill are calling for much more oversight on Saudi defense purchases. Getting congressional approval for arms sales is getting harder as the Yemenis' suffering gets worse.

The long-term danger for the Saudis is that they are now tied to the fate of a mercurial and unpredictable US president. They hope that he will fight Iran on their behalf. So far they have rhetoric. Expectations are high for a president who has yet to deliver a single significant piece of legislation for his own core supporters at home. His track record of broken promises — dumping the Iran nuclear treaty, moving the US Embassy to Jerusalem or the Muslim ban, for instance — should engender second thoughts.