While the new Saudi ambassador to Washington, Khaled bin Salman, wants to convince the Trump administration to get more involved in the war in Yemen, history may deter the US administration. 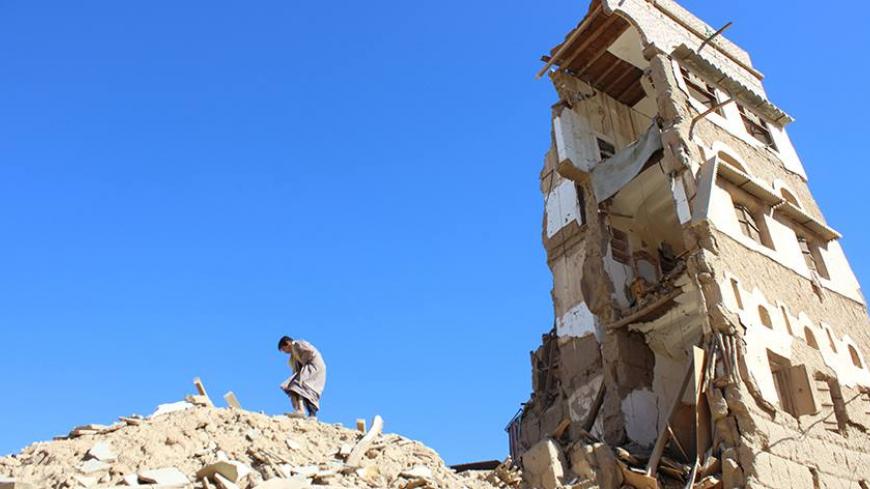 A boy walks on the rubble of a house destroyed by a recent Saudi-led airstrike, Saada, Yemen, Jan. 4, 2017. - REUTERS/Naif Rahma

Saudi Arabia is pressing the Trump administration to become more involved in supporting its war in Yemen. Bogged down in a quagmire of their own making, the Saudis want the United States to give them unqualified support. Fifty-five years ago, the Saudis pressed President John F. Kennedy to support them in another war in Yemen; Kennedy wisely deferred.

Riyadh has high expectations that the new US administration will provide significant support for their next major military operation in Yemen to seize Hodeidah, the largest port on the Red Sea, to tighten the blockade on the Houthi rebels and supporters of former President Ali Abdullah Saleh. The offensive will be the most complex operation of the war so far, as the rebels seem determined to fight to keep the port. The Saudis want American help to ensure their offensive does not end in a bloody repulse; they want more intelligence, munitions, naval support and diplomatic backing.

Former US President Barack Obama supported the Saudi war in Yemen, but with limits. Obama was skeptical of the Saudi claims that Iran was determining the rebels' policy or that the Houthis were the equivalent of Hezbollah. The Obama team pressed for a political solution, especially in the second year of the war.

In 1962, an Egyptian-backed coup toppled the Yemeni monarchy in Sanaa. Cairo sent tens of thousands of troops to support the republican government; the Soviets provided air power and hundreds of advisers. Egyptian President Gamal Abdel Nasser promised that the Yemeni coup would prompt a revolution in Saudi Arabia and an uprising in the British colony in south Yemen. A new Arab Republic of Arabia would emerge and unite with Egypt under Nasser's leadership.

While Saudi Crown Prince Faisal attended the UN General Assembly in New York, the Egyptian expeditionary force poured into Yemen via Hodeidah. Kennedy invited the prince to lunch at the White House, where Faisal pressed Kennedy to support the royalist opposition and help their insurgency in the Saudi borderlands. The Saudis were already getting help covertly from the British. Subsequently, the Israelis joined the campaign to back the royalists and bog Nasser down in a quagmire in Yemen.

Kennedy hesitated to back the Saudis, but committed to defending the kingdom from outside aggression and internal unrest. This was an expansion of President Franklin Delano Roosevelt's 1943 commitment to provide security against external threats. But Kennedy was not prepared to join the clandestine war with the royalists and he recognized the republican government.

Kennedy invited Faisal to the private quarters of the White House to continue the conversation in a more intimate setting without advisers. He told Faisal that the real threat to the kingdom came from its own people who were tired of King Saud bin Abdulaziz Al Saud's corruption and misrule. The kingdom needed reform or it would collapse like the Yemeni monarchy.

Faisal agreed with Kennedy's assessment. He promised that he would take immediate measures to reform the kingdom and ease his brother off the throne. He would abolish slavery, still legal in the country, and expand education, including for girls. Within a year, Faisal had done all three.

Saudi Arabia still faced tough challenges. The Royal Saudi Air Force (RSAF) had to be grounded three times in the next five years because its pilots kept defecting to Egypt with their jets. The same thing happened to the Royal Jordanian Air Force when King Hussein sent a squadron to Jeddah to show solidarity with the Saudis. In June 1963, Kennedy sent American fighter jets to the kingdom to deter the Egyptians from bombing royalist camps inside Saudi territory. The deployment was called Operation Hard Surface and was Kennedy's only deployment of troops in the Middle East. But the CIA stayed out of the war in Yemen.

The war lasted for over eight years, and the humanitarian damage to the country was devastating. In the end, the royalists lost and the British Crown Colony in Aden became the People's Democratic Republic of Yemen, the only communist country in the Arab world. By then, Nasser had lost the Six-Day War and King Faisal was firmly on the throne awash in petrodollars.

Kennedy's handling of the Yemeni crisis came amid his dealings with the Cuban missile crisis and the Chinese invasion of India; it was a virtuoso performance of diplomacy and statesmanship. He defended the Saudi kingdom, but stayed out of the Yemeni quagmire.

The lesson of Kennedy's Yemeni crisis is that Washington needs to be candid with Riyadh. Kennedy told Faisal his deep threat was from the monarchy's own weaknesses and deficiencies. He agreed Egypt was a danger, but that it should not be exaggerated. Kennedy provided tangible support to defend the kingdom, but stayed out of the quarrels in Yemen. It was a wise decision.

The architect of the current Yemeni war is the Saudi king's son, Deputy Crown Prince and Defense Minister Mohammed bin Salman, who is apparently also the darling of the Trump team. On April 23, the king promoted another one of his sons who is a former RSAF pilot, Khaled bin Salman, to be the Saudi ambassador to Washington. He will be the perfect interlocutor for a frank and candid discussion about the future of the Saudi-American entente.