After a deep disillusionment with the United States during Obama’s terms in office, the Saudis are now looking toward a better relationship with the Trump administration. 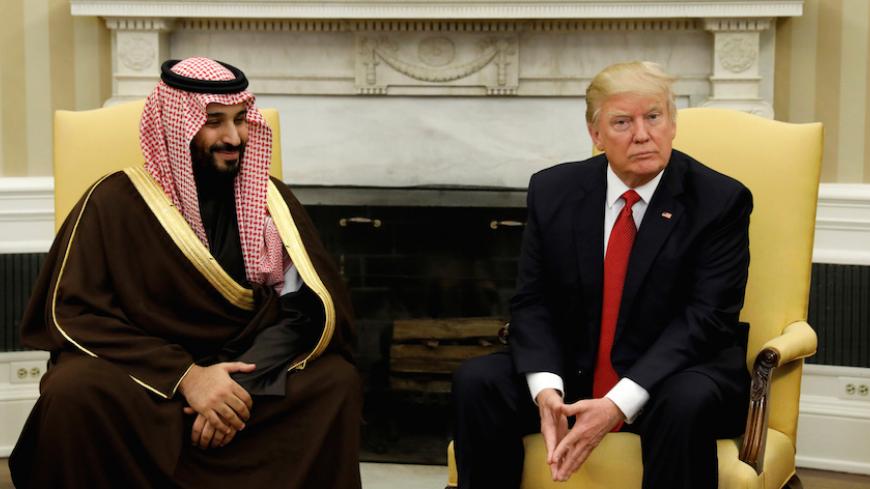 US President Donald Trump meets with Saudi Deputy Crown Prince and Minister of Defense Mohammed bin Salman in the Oval Office of the White House in Washington, March 14, 2017. - REUTERS/Kevin Lamarque

Saudi Arabia has embraced the new US administration. Much of the kingdom's enthusiasm for Donald Trump owes more to Saudi disillusionment with Barack Obama and Hillary Clinton than anything else. The Saudi embrace is not going to remove the lingering tensions between Washington and Riyadh.

The Saudi media and government have hailed the visit this month of Deputy Crown Prince and Defense Minister Mohammed bin Salman to the White House as a "turning point" that has "restored" the 70-year-old relationship back to where it was before Obama. The Saudis have emphasized that they are encouraged by American promises to counter Iranian aggression in the region and to stand behind the kingdom in its war in Yemen against the Iranian-backed Houthi Zaydi rebels. The Saudis are also encouraged by American intentions to step up the fight against the Islamic State and al-Qaeda in the Arabian Peninsula.

The Saudis, for their part, are promising to engage with Iraq more to counter Iran's influence in Baghdad. Foreign Minister Adel al-Jubeir's February visit to Iraq, the first by a senior Saudi official since 1990, will be followed by a sustained engagement, the Saudis say.

The enthusiasm for the new US team is a reflection of the deep disappointment with the Obama administration. It's more than a bit ironic since Obama courted the Saudis avidly his whole term in office. Riyadh was his first destination in the Arab world and he traveled to Saudi Arabia more than any other country in the Middle East, including Israel. He sold more than $110 billion in military equipment to the kingdom, far more than any of his predecessors.

But Obama also flirted with backing the Arab Spring. He hailed the departure from power of Egyptian President Hosni Mubarak in February 2011. He encouraged the Bahraini royal family to compromise with the Shiite majority for political reforms on the island. His first secretary of state, Hillary Clinton, pressed for gender equality around the world. For the Saudis, the US support for political and social change and reform, however half-hearted, was an unprecedented departure from traditional US support for the status quo and authoritarian leaders in the region.

The new administration is unlikely to be as diffident on the issues raised by the Arab Spring. Trump has already embraced the Abdel Fattah al-Sisi military regime in Egypt. The administration has identified the major threat to regional stability as the Iranian regime and its proxies like Hezbollah and the Shiite militias Iran is backing in Syria and Iraq. It is not likely to raise human rights issues.

The Saudis are not putting all their eggs in the US connection, however. Last week, King Salman bin Abdul-Aziz Al Saud completed a three-week trip to Asia with a stop in China where the Saudis signed $65 billion in new trade agreements. The Asia trip and especially the China visit have been trumpeted as strategic moves by the kingdom. The Saudis are especially interested in military cooperation with Beijing.

Two issues will continue to unsettle the US-Saudi partnership. First is growing opposition in Congress and elsewhere to the war in Yemen. Opponents of the Saudi blockade of the Houthi-controlled northern half of Yemen suggest Saudi strategy now is to use starvation as a tool to defeat the rebels. The anticipated coalition offensive to take the north's major port at Hodeidah away from the Houthis would tighten the blockade further. Amnesty International has called on Washington and London to stop providing arms and other support to the kingdom. According to Amnesty International, the United States and United Kingdom have already provided more than $5 billion worth of arms to support the war against the Houthis, which is 10 times larger than the humanitarian assistance provided by the two.

The other irritant is the Justice Against Sponsors of Terrorism Act, which allows the kingdom to be sued for its alleged role in the 9/11 terrorist attacks. Trump supports the bill that Obama vetoed only to be overridden. Now hundreds of family members of victims of the 9/11 attack have filed a lawsuit against the Saudis for allegedly funding al-Qaeda before 2001 and for allegedly providing assistance to the hijackers. Saudi diplomats in the United States and Germany allegedly were involved in the plot.

Saudi commentators have said the suit will have economic consequences for the United States and fuel hatred toward US policy in the Islamic world. The court case is expected to drag on for years. It is certain to result in considerable controversy for the Saudis.

The US-Saudi partnership dates to 1943 when King Ibn Saud sent his son Prince Faisal to Washington to meet President Franklin Delano Roosevelt in the Oval Office, and two years later the king and FDR met face to face in Egypt. The entente has always enjoyed bipartisan support. Democrats and Republicans have been backers of strong ties to the kingdom. Riyadh would be wise to steer clear of becoming identified with either party in the United States as it navigates the most polarized politics in modern US history.