Saudi Arabia is pleased with strong talk from US President-elect Donald Trump, but also has worries about his positions on Syrian President Bashar al-Assad and on recognizing Jerusalem as Israel's capital. 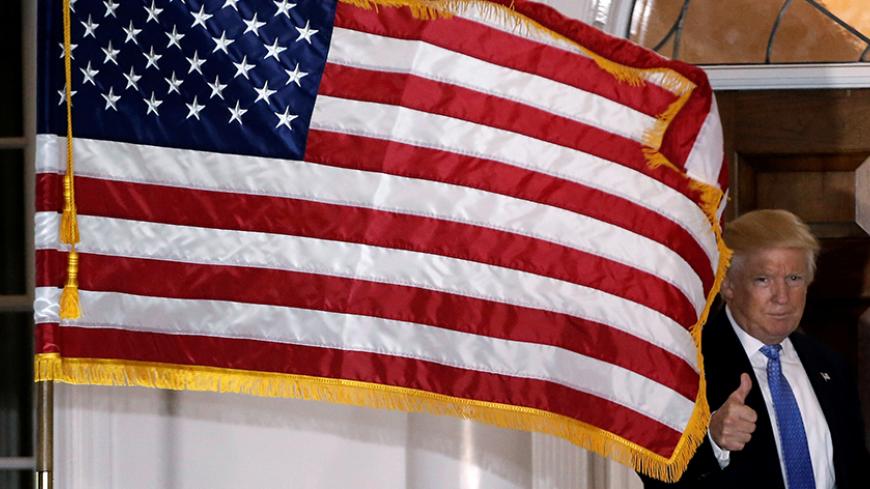 US President-elect Donald Trump gestures to the news media as he appears outside the main clubhouse at Trump National Golf Club in Bedminster, New Jersey, Nov. 20, 2016. - REUTERS/Mike Segar

The Saudis were surprised by Donald Trump's victory in the US presidential election, and their numerous America watchers are trying to assess what Trump's foreign policy will mean for the kingdom.

The Saudi partnership with America dates to 1943 when two future kings, Faisal and Khaled, were sent by their father, King ibn Saud, to Washington to confer with President Franklin Roosevelt. Roosevelt treated the two princes as the royalty they were. They stayed in Blair House, met Roosevelt in the Oval Office and traveled around the country to see how America was mobilized for war.

Ever since, the kingdom has sought to understand American politics and influence US policy. But Trump was a surprise. The royals' longtime connections to America's two family dynasties, the Bushes and the Clintons, were on the wrong side of history. Some Saudi America watchers have argued that Trump's rhetoric on Muslims was crucial to his victory, a source of deep concern for a country that prides itself as the Custodian of the two Holy Cities. The Saudis are nervous about what they see as rising Islamophobia in America.

But the Saudis are pleased with the strong talk from Trump and his appointees on Iran. Articles by key future decision-makers such as retired Lt. Gen. Michael Flynn and Kansas congressman Mike Pompeo's articulating the need for tougher American responses to Iran subversion and terrorism have been well-received in Riyadh.

The Saudis will be ready for more security cooperation against Iran and its proxies. Saudi intelligence snatched the head of Iran's terrorist network in the Gulf, Ahmed Ibrahim al-Mughassil, last year in Beirut. The mastermind of the 1996 terrorist attack on the Khobar Towers, a US Air Force barracks in Dhahran, Saudi Arabia, Mughassil is the epitome of what the Saudis argue is the most dangerous terrorist apparatus in the region. Crown Prince Mohammad bin Nayef orchestrated the Mughassil operation.

Riyadh would like to see more aggressive moves against Tehran. The United Nations-endorsed nuclear deal with Iran is not Riyadh's priority; instead, the Saudis want international attention and sanctions focused on Iranian subversion. They will welcome calls for regime change in Tehran and efforts to de-legitimize the Islamic Republic.

The Saudis also welcome Trump's support for Egyptian President Abdel Fattah al-Sisi. Riyadh was a major backer of the coup that brought Sisi to power. While relations have been bumpier recently with Cairo, the Saudis want an American administration that focuses on stability and not reform. King Salman bin Abdul-Aziz Al Saud believes the Arab Spring was a disaster for the region that should never have been welcomed by Washington. He will want strong American support for the Saudi military role in keeping the Sunni minority in charge in Bahrain.

Riyadh is worried about Trump's views on Syrian President Bashar al-Assad, who is the Saudis' bete noire for his ties to Iran. Salman will press the incoming administration to get more deeply involved in getting rid of Assad. The Saudis believe Damascus is the place to upset Iranian influence in the region. If the Sunni majority in Syria can oust the Alawite Assad, then Iranian domination of two Arab capitals — Damascus and Beirut — will be reversed. Assad, not the Islamic State (IS), is the top priority for the kingdom.

The Saudis do agree that IS is a threat. Mohammad bin Nayef is actively seeking to destroy the nascent IS underground in the kingdom. But Iran and its proxies are the biggest threat.

Salman's immediate problem is his war in Yemen. The king and his son Prince Mohammed bin Salman argue that they have prevented Iran from getting a foothold on the Arabian Peninsula by going to war against the pro-Iranian Zaydi Houthis and the loyalists of former President Ali Abdullah Saleh, but they recognize the war is increasingly costly. The kingdom is spending billions on a war when it needs to reduce military expenditures if Mohammed bin Salman's Saudi Vision 2030 has any chance of transforming the economy.

The Yemen war is becoming more dangerous. An American destroyer was fired on twice last month. Another attempt at a cease-fire collapsed this week. A sudden crisis in the war could be an early test for the new US administration in February 2017.

Saudi commentary on Yemen increasingly seems desperate to find an honorable way out of the Yemeni adventure. Defense Minister Mohammed bin Salman has the most to lose if the war is an endless quagmire. A recent study of the cost of the war by a British think tank concluded that the defense minister is likely to be blamed for the conflict. Of course, the only opinion that matters is the king's, and Salman is still his son's booster.

The Arab-Israeli conflict has receded on Saudi priorities for the last two years, but if Trump follows through on promises to move the American Embassy to Jerusalem, the kingdom will react harshly. Salman is a strong defender of the Islamic identity of Jerusalem. He has been involved in fundraising for supporting the Palestinian cause in Jerusalem since 1967, when then-King Faisal made him responsible for the effort.

The Saudis and their lobbyists in Washington will press Trump on one immediate challenge to the US relationship with Saudi Arabia. The congressional override of President Barack Obama's veto of the Justice Against Sponsors of Terrorism Act (JASTA) means our oldest and strongest ally in the Arab world is going to be the target of what Saudis believe to be unnecessary and dangerous lawsuits. This is likely to damage counterterrorism cooperation with the kingdom and its Gulf allies, making us less safe. The bill also sets a dangerous precedent that could be used in the future against American soldiers and diplomats.

In the interim between his election and the inauguration Jan. 20, Trump and his team should quietly encourage the lame-duck Congress to amend JASTA to give the new president a waiver to exclude from such lawsuits countries deemed by the president to be major partners in fighting terrorism. Obama could take the political heat and sign an amendment with waiver authority. This will not be an easy sell, but it is far better to change JASTA now than to have to live with it come January 2017. Failure to act responsibly on JASTA, and acknowledging that the issue of a Saudi role in 9/11 has been thoroughly investigated and debunked by two congressionally mandated commissions, will set back the next president's efforts to stabilize a very dangerous region before he even gets started.