Putin not waiting for Trump to press advantage in Syria

Russian president seeks gains in Syria in the final weeks of the Obama administration; Saudi Arabia encouraged by Trump’s take on Iran; Liberman as gatekeeper between Trump and Netanyahu. 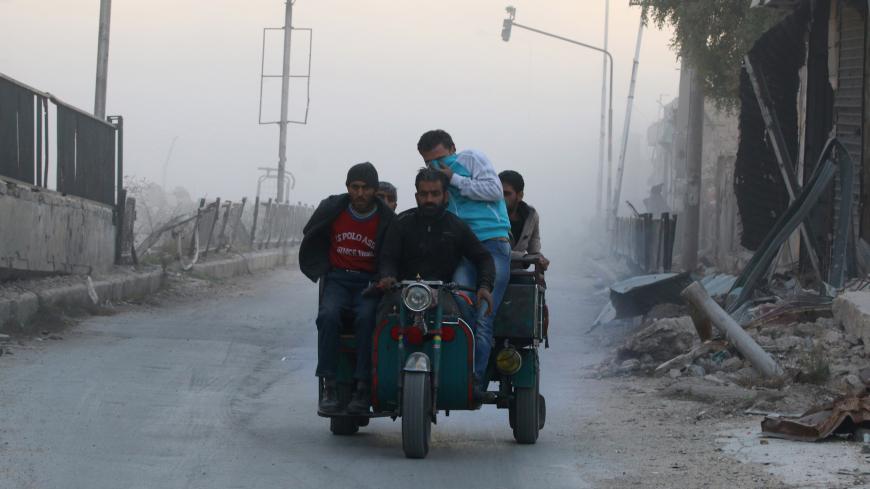 Men ride on a vehicle amid dust after a strike on the rebel-held and besieged al-Shaar neighborhood of Aleppo, Syria, Nov. 26, 2016. - REUTERS/Abdalrhman Ismail

Putin wastes no time in Syria

Although US President-elect Donald Trump has signaled his willingness to work with Russia to end the war in Syria, Russian President Vladimir Putin is taking nothing for granted.

Trump said in an interview with The New York Times on Nov. 22, “We have to end that craziness that’s going on in Syria.”

Maxim Suchkov writes that while there is cautious optimism about Trump’s position on Syria, Putin is also aware that the US Congress may seek to box in Trump, as Julian Pecquet has reported, so Russia will not be squandering the remaining weeks of the Obama administration.

“Moscow believes it now has the opportunity and time to make critical gains in Syria,” Suchkov writes. “Russian airstrikes in Idlib and Homs provinces as well as the Syrian army offensive in Aleppo seem to be building in this line of reasoning. At the same time, this shouldn’t contradict other Russian moves described previously — with an overall decrease in anti-American rhetoric, more attacks on the Islamic State and Jabhat Fatah al-Sham, and prospects for the deterrent built by the Russians in Syria to be a potential bargaining chip with the new administration.

“At the same time,” Suchkov adds, “the military offensives are set to bring more rebel groups to direct talks with the Russian military. According to the Bulletin of the Russian Centre for Reconciliation of Opposing Sides in the Syrian Arab Republic on Nov. 19, within the previous 24 hours 'truce agreements were signed with representatives of three inhabited areas of Hama province and two in Latakia province.' Thus, the total number of inhabited areas whose leaders had signed the so-called reconciliation agreements now amounts to 956, while the number of cease-fire application forms signed with leaders of armed groups has reached 69. Finally, another track Moscow is pursuing is consultations with Iran and Turkey on strategic aspects of Syrian statehood, such as the country’s integrity. Both Tehran and Ankara favor the idea of a united Syria — though each for their own interests and with specific visions for it. Nevertheless, it is important for Russia to find itself on the same page with the regional stakeholders on the critical issues before the situation in Syria is transformed into a postwar diplomatic mode.”

Bruce Riedel writes that Saudi Arabia is “pleased with the strong talk from Trump and his appointees on Iran. Articles by key future decision-makers such as retired Lt. Gen. Michael Flynn and Kansas congressman Mike Pompeo's articulating the need for tougher American responses to Iran subversion and terrorism have been well-received in Riyadh.”

“The United Nations-endorsed nuclear deal with Iran is not Riyadh's priority,” Riedel explains, “instead, the Saudis want international attention and sanctions focused on Iranian subversion. They will welcome calls for regime change in Tehran and efforts to de-legitimize the Islamic Republic."

While encouraged by Trump’s comments so far on Iran, Saudis are nonetheless concerned about Trump’s apparent willingness to work more closely with Russia in Syria, and by the potential rise of “Islamophobia” in the United States.

The kingdom’s top priority, however, even before Trump takes office, will be to roll back the Justice Against Sponsors of Terrorism Act (JASTA), which allows lawsuits against Saudi Arabia, and possibly other countries, by victims of terrorism. Riedel recommends that “between his election and the inauguration Jan. 20, Trump and his team should quietly encourage the lame-duck Congress to amend JASTA to give the new president a waiver to exclude from such lawsuits countries deemed by the president to be major partners in fighting terrorism. Obama could take the political heat and sign an amendment with waiver authority. This will not be an easy sell, but it is far better to change JASTA now than to have to live with it come January 2017. Failure to act responsibly on JASTA, and acknowledging that the issue of a Saudi role in 9/11 has been thoroughly investigated and debunked by two congressionally mandated commissions, will set back the next president's efforts to stabilize a very dangerous region before he even gets started.”

“Trump said Nov. 22 that he would love to be the one to solve the Israel-Palestine conflict, but he did not indicate how much of a priority that would be for his administration. Trump suggested that [Jared] Kushner, the president-elect's 35-year-old son-in-law who played a key role advising Trump on his campaign, would probably not take a formal post in his administration, but could help make peace between the Israelis and the Palestinians,” Laura Rozen reports.

If there is a Trump initiative on the Israeli-Palestinian conflict, the action in Israel will fall to Defense Minister Avigdor Liberman, Ben Caspit writes. “Liberman is the sentry patrolling the wall around the future relationship between the Trump administration and the Netanyahu government. Liberman is passionate about his new position right in the nerve center of Israel’s defense establishment. He shocked everyone while briefing political journalists in Jerusalem on Nov. 16 by saying that he will strive to reach an agreement with the Trump administration in which Israel will freeze construction outside the major settlement blocs while building within them. The defense minister explained that what he meant was official reconfirmation of the 'Bush Letter' of 2004.”

Liberman's dealings with the incoming Trump administration would be of a piece with his bid for leadership in Israeli domestic politics. Liberman, according to Caspit, “is targeting the political center instead by rebuilding his image as a security hawk and political and diplomatic pragmatist. At the same time, Liberman is also trying to establish an intimate channel of communication with the Trump administration and to become the new administration’s main address in Israel. He knows that it is the key to building up his image as the ‘responsible adult’ in the government and to legitimize himself as a potential candidate for leadership.”

A US initiative, on terms favorable to Israel, is no done deal, Caspit reports. “In the series of contacts between Liberman and his people and Trump’s inner circle, the Americans sent Israel a clear message: Don’t celebrate prematurely and don’t be rash. Most importantly, a political source told Al-Monitor on condition of anonymity, ‘Don’t establish facts on the ground.’”