Liberman takes seat at switchboard between US administration, Israel

Israeli Defense Minister Avigdor Liberman is already busy coordinating with the new US administration on settlement expansion policies in an attempt to build a pragmatic and responsible image for himself, as Prime Minister Benjamin Netanyahu watches from a safe distance. 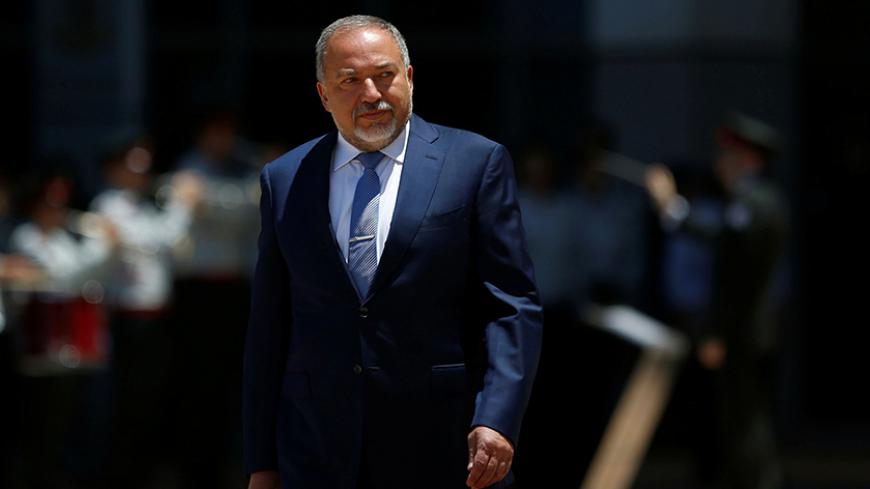 Israel's Defense Minister Avigdor Liberman, the head of the far-right Yisrael Beitenu, reviews an honor guard during a welcoming ceremony at the Defense Ministry in Tel Aviv, May 31, 2016. - REUTERS/Ronen Zvulun

Early this week, Israeli Prime Minister Benjamin Netanyahu instructed his Cabinet not to contact Donald Trump’s emerging administration or anyone close to the president-elect. He also instructed them not to try to pressure the new administration. Any contact with a Trump associate should be handled only through the Israeli Embassy in Washington. But his Nov. 21 instructions came too late. According to a Haaretz report, Education Minister Naftali Bennett had already met a day earlier with Trump’s people in New York. At these meetings, Bennett pleaded with his hosts not to adopt the two-state-solution model as the basis for negotiations between Israel and the Palestinians and to be open to “new ideas.” Bennett is suggesting that Israel take advantage of the opportunity to announce Israel’s annexation of the settlements in the West Bank's Area C.

As of now, Defense Minister Avigdor Liberman is the sentry patrolling the wall around the future relationship between the Trump administration and the Netanyahu government. Liberman is passionate about his new position right in the nerve center of Israel’s defense establishment. He shocked everyone while briefing political journalists in Jerusalem on Nov. 16 by saying that he will strive to reach an agreement with the Trump administration in which Israel will freeze construction outside the major settlement blocs while building within them. The defense minister explained that what he meant was official reconfirmation of the “Bush Letter” of 2004. In that exchange of letters between President George W. Bush and Prime Minister Ariel Sharon, the president made a commitment to accept the new reality on the ground, meaning the settlement blocs. “If we get permission by the administration to act according to the Bush-Sharon formula, we have to grab it with both hands,” he said, adding that in such a setup, Israel would no longer build outside the settlement blocs. "We should follow that correspondence to the letter, without being extreme. We must neither add to it nor detract from it.”

Liberman has been under harsh political attack from the right ever since. Most of it has come from HaBayit HaYehudi, but he has also been attacked by Likud ministers who are trying to move as far to the right as possible. But Liberman isn’t bothered. He has come to terms with the fact that he will not win votes from the religious Zionists or the settlers, and he is targeting the political center instead by rebuilding his image as a security hawk and political and diplomatic pragmatist. At the same time, Liberman is also trying to establish an intimate channel of communication with the Trump administration and to become the new administration’s main address in Israel. He knows that it is the key to building up his image as the “responsible adult” in the government and to legitimize himself as a potential candidate for leadership.

Given this plan, Liberman is not worried about attempts to brand him a leftist. He knows that no one will buy it. As someone who lives in a settlement and who frequently released bellicose statements while he was in the opposition, Liberman is now seeking the more moderate path. He wants to position himself for the possibility that Netanyahu will be forced to resign as prime minister or defeated in an election. His model is Sharon, who did the exact same thing. During Netanyahu’s first term, Sharon became foreign minister, changed his spots and accompanied the prime minister on negotiations with the Palestinians on the Wye River Memorandum. When Netanyahu was defeated in the next election and resigned, Sharon stood by his side and took the torch from him. This is Liberman’s plan as well. To implement it, however, he will have to reunite his Yisrael Beitenu party with the Likud before the next elections.

In the series of contacts between Liberman and his people and Trump’s inner circle, the Americans sent Israel a clear message: Don’t celebrate prematurely and don’t be rash. Most importantly, a political source told Al-Monitor on condition of anonymity, “Don’t establish facts on the ground.” Liberman himself has said that this kind of behavior, as seen in the jubilation of the right and in Bennett’s demands, is damaging to the relationship between Israel and the new administration before it has even been formed. According to another political source, Liberman said, “No one likes being dictated what to do before he even starts, or seeing new circumstances be created without being consulted.” He added, “We need to show a little humility and patience.”

The question swirling in political circles is whether Liberman’s comments, particularly the formula he suggested by which Israel would freeze construction outside the big settlement blocs and renew construction within them, was made with Netanyahu’s approval. Many Israeli analysts believe that it was.

Despite all the bad blood between them until recently, Liberman and Netanyahu are closely connected right now. They need each other. With Netanyahu facing the submarine scandal that threatens his rule, Liberman’s support is keeping him afloat. Meanwhile, Liberman needs another two years as defense minister to establish and strengthen his new status and image. It is therefore safe to assume that Liberman did not send up his test balloon (the settlement expansion offer) without coordinating it with Netanyahu first. Netanyahu is thus able to wink at the right and tell the settlers that he is not responsible for what Liberman said, while at the same time wink at Washington and hint to the Americans that they should listen to his defense minister.

All in all, Netanyahu is pleased. He has been spared the burden of presidential candidate Hillary Clinton, who would have presented him with quite a few difficulties of the kind he faced during the presidencies of Bill Clinton and Barack Obama. While he doesn’t yet know what he got instead of Clinton, he is telling himself that whoever it is, it can’t be worse than her. The president-elect’s comments that he wants to bring an end to the Palestinian-Israeli conflict may be very worrying to Jerusalem, but he has made no binding statement. The assessment in Netanyahu’s circle is that Trump himself still doesn’t know what he wants to achieve in the Middle East. He should therefore be helped to understand that the process has reached a dead end and that any efforts on his part would be futile.