Russia is trying to figure out all the Middle East scenarios that might affect it under a Donald Trump presidency. 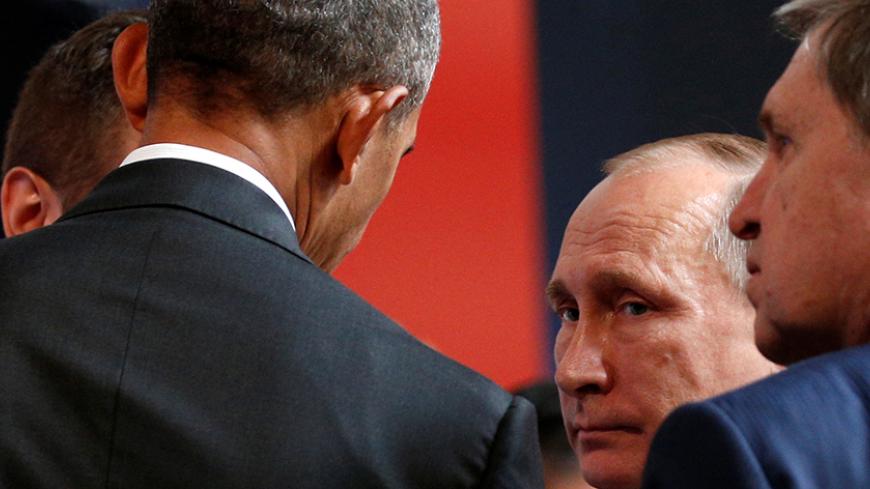 US President Barack Obama and his Russian counterpart, Vladimir Putin, met Nov. 20 on the margins of the Asia-Pacific Economic Summit in Peru. The four-minute conversation is most likely to be the last meeting between Putin and Obama in Obama's capacity as president of the United States, though Putin invited Obama to visit Russia “any time at his convenience.” The brief encounter focused on the two issues that have been shaping the overall agenda for US-Russia relations in the last couple of years — Ukraine and Syria. While both lamented “the absence of progress” on the Ukrainian track, statements on Syria signaled the goals and expectation each party had vis-a-vis the other.

As Obama emphasized the need for Secretary of State John Kerry and Foreign Minister Sergey Lavrov to “continue pursuing initiatives together with the broader international community to diminish the violence and alleviate the suffering of the Syrian people," Putin pointed out that the "remaining two months of [Obama's presidency] should be used for the continuation of the search for a Syrian settlement." The dialectic of the statements was: Although the parties perceive each other as untrustworthy, both share a need to preserve a political will to selectively cooperate.

Neither Moscow nor Washington, however, is really expecting a breakthrough until the new US administration takes office. “Obama is a lame duck, and in the months left before [Donald] Trump’s inauguration he will be busy sealing his legacy rather than willing to invest his capital into something particularly challenging such as Syria, which ultimately may end up into yet another failure,” a source in the Russian Foreign Ministry told Al-Monitor.

Moscow is indeed hopeful that the new administration in the White House will prioritize the fight against terrorism and extremism and that joint dealings on Syria may culminate in a real cooperation. The spectrum of possible US-Russia interactions discussed in the Russian expert community varies from intelligence sharing between the respective agencies to coordinated joint military airstrikes to even a joint offensive on Raqqa sometime next year — a notable action to mark 210 years of US-Russia diplomatic relations that Putin and President-elect Trump noted in their phone conversation a week ago. Yet, amid enthusiastic coverage of the Trump election victory by the majority — if not all — of the Russian media, Putin himself signaled a more cautious stance. Speaking after the APEC summit, he said, “We all know there’s a big difference — in all countries — between campaign promises and real policies.” Besides, when asked about his first possible meeting with Trump after he becomes president, Putin suggested that “it makes sense for the two teams to meet first.”

Coupled with Russia’s actions on the ground in Syria, this vision gives an idea of what the Kremlin is up to in the remaining months. Thinking of possible systemic factors that would limit Trump’s desire to “normalize ties” with Russia, Moscow is closely looking at the recent activities in the US Congress — both the new sanctions package on Syria passed in the House and the potential “anti-Russian legislation” discussed in the Senate. Among Russian decision-makers, the initiatives are viewed as on the one hand an attempt to narrow corridors of opportunity for “Trump’s foreign policy experiments,” and on the other as an intent to set certain “red lines” for Trump in how far he can go in his “deals” with the Kremlin.

Therefore, in this logic of “hoping for the best but expecting the worst,” Moscow believes it now has the opportunity and time to make critical gains in Syria. Russian airstrikes in Idlib and Homs provinces as well as the Syrian army offensive in Aleppo seem to be building in this line of reasoning. At the same time, this shouldn’t contradict other Russian moves described previously — with an overall decrease in anti-American rhetoric, more attacks on the Islamic State and Jabhat Fatah al-Sham, and prospects for the deterrent built by the Russians in Syria to be a potential bargaining chip with the new administration. Similarly, the recent rise in the military activity of the opposition is also seen as a manifestation of uncertainty over what the Trump administration policies would be like. An expert close to the Kremlin told Al-Monitor, “Rebels and their sponsors are full of despair that political, military and financial support for their activities may soon be ceased. So they are willing to indiscriminately fight everyone — including each other — with twice the force.” Whether this is the prime reason for the renewed hostilities, the expert's opinion is representative of the general thinking in the Kremlin: The rebels are seeking to preserve the attention and support of external sponsors at any cost. Therefore, Russia’s own striving to dismantle “key extremists’ infrastructure” and gain more ground is set to secure a better negotiating position for future talks on the Syria settlement.

At the same time, the military offensives are set to bring more rebel groups to direct talks with the Russian military. According to the Bulletin of the Russian Centre for Reconciliation of Opposing Sides in the Syrian Arab Republic on Nov. 19, within the previous 24 hours “truce agreements were signed with representatives of three inhabited areas of Hama province and two in Latakia province.” Thus, the total number of inhabited areas whose leaders had signed the so-called reconciliation agreements now amounts to 956, while the number of cease-fire application forms signed with leaders of armed groups has reached 69.

Finally, another track Moscow is pursuing is consultations with Iran and Turkey on strategic aspects of Syrian statehood, such as the country’s integrity. Both Tehran and Ankara favor the idea of a united Syria — though each for their own interests and with specific visions for it. Nevertheless, it is important for Russia to find itself on the same page with the regional stakeholders on the critical issues before the situation in Syria is transformed into a postwar diplomatic mode.

This means a busy agenda for Moscow as it prepares for whatever policies the Trump administration will pursue — be they aligned with Russia’s own stance on Syria or crafted to counter it.