US national security adviser John Bolton went to Moscow with a specific mission and a specific message involving a Putin-Trump meeting in July; however, the question remains whether "summit diplomacy" can resolve looming security issues in the Middle East. 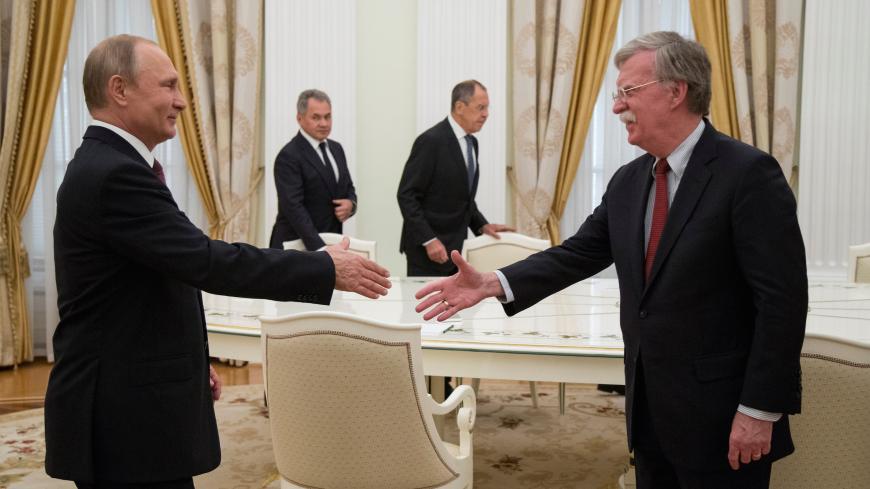 MOSCOW — On June 27, US national security adviser John Bolton came to Moscow as part of an effort to lay the groundwork for a summit between Presidents Vladimir Putin and Donald Trump. After a closed-door meeting with Russian Foreign Minister Sergey Lavrov, Bolton was received by Putin in the Kremlin. Putin foreign affairs aide Yury Ushakov, Lavrov and Defense Minister Sergei Shoigu were also present.

Knowing that the issue of alleged "Russian interference” in the 2016 US election is a primary concern for much of the political elite in Washington, Putin started his introductory remarks with a subtle allusion that Moscow had nothing to do with it.

“To begin with, I regret to have to point out that Russian-US relations are not at their best. … I believe that this is largely due to sharp domestic political strife in the United States, but your visit to Moscow gives us hope that we can make at least the first steps toward restoring full-fledged relations between our states. Russia has never sought confrontation,” Putin said.

Putin also played a good host by congratulating Bolton on the United States' obtaining the right to host the 2026 FIFA World Cup soccer tournament. Russia is hosting this year's tourney. “So far, we have been able to run this event properly. We will be glad to share our experience with you,” Putin added.

Bolton played along. “I very much look forward to discussing with you … how to improve Russian-US relations, find areas where we can agree and make progress together. … We are most appreciative of your courtesy and graciousness here, and I look forward to learning how you handled the World Cup so successfully, among other things,” he said.

Al-Monitor reported in March that the appointment of Bolton as Trump's national security adviser alerted many in Moscow to a possible return of a neoconservative American foreign policy, including in the Middle East. Pro-Kremlin officials and commentators were unanimous in the assessment of Bolton as a “super hawk” who came to replace “a hawk" (H.R. McMaster). Given Bolton’s background and political stance, negotiations with the United States over arms control were expected to be difficult and the administration's moves on the Iran deal's Joint Comprehensive Plan of Action turned out to be exactly what was feared. Yet as a negotiator, Bolton’s incontestable advantage has been seen in Moscow as that of having the president’s ear and as being consistent — and in that sense predictable — in his views. Thus, Trump’s overall choice of the messenger to Moscow sat rather well with the Russians.

Bolton came on a specific mission — to talk details of the summit — with a specific message: Trump wants to have the summit despite all the domestic opposition to the idea and skepticism over the lack of deliverables. On the merits, in his talks with Russian counterparts, Bolton succeeded in discussing the details and conveying Trump's message.

“Critics of Trump made political capital by raising problems with the summit. But despite the political noise, direct communications between presidents Trump and Putin are in the best interests of Russia and the US,” Bolton said at the press conference at Interfax.

Bolton added, “The fact of the summit itself is a deliverable,” and he said that while he wasn’t positive whether anything concrete will come of it, he made it clear that Trump “felt strongly” that it was time for him and Putin to meet.

Ushakov, who spoke right after Putin’s meeting with Bolton, said that details of the coming summit will be revealed June 28 and that the summit had been long planned via “back channels.” The final announcement on the place and date is to be made simultaneously by Russian and US officials June 28.

“We finalized the date and venue for the summit. It will take place in a third country convenient for both leaders. They will likely meet around the afternoon, will have a face-to-face meeting, a protocol event, most likely a working breakfast and then a joint press conference,” Ushakov said. The summit is reportedly scheduled for a few hours.

Trump will be in Brussels for a NATO meeting planned for July 11-12 and then is to begin a visit to Britain on July 13.

The Kremlin initially announced the Putin-Trump summit might be held in Vienna on July 15. It was later reported that the venue had been changed to Helsinki, as Finland’s capital was seen as both a place of special significance for US-Russia relations and a more convenient venue for the Russian president to be able to get back to Moscow for the FIFA World Cup final game scheduled for 6 p.m. on that date. On June 26, Lavrov had a phone call with Austrian Chancellor Sebastian Kurz, reviving speculation that Vienna still might host the summit.

On the same day, Kremlin spokesman Dmitry Peskov said the major issues that would dominate the Bolton visit and the subsequent Putin-Trump summit are “the issues of international stability and security, the disarmament issues and well-known regional problems, and certainly bilateral relations.” Following Bolton's talks with Putin, the Russian media reported that the list of issues on the Putin-Trump agenda was expanded to include implications of the US decision to abandon the Iran deal, conflict in Ukraine, the problem of North Korea and arms control, including the ABM treaty.

Ushakov said the two presidents may adopt a final communique following the summit "to outline further steps on the improvement of US-Russia relations and the two countries' joint actions in the international arena."

Earlier, Russia’s Foreign Ministry stressed that the situation in Syria will be a primary focus of the coming talks.

A day before the Lavrov-Bolton meeting, officials at Russia’s military air base in Hmeimim, Syria, said the southern de-escalation zone in Syria had ceased to function, attributing this to violations by “extremist groups and illegal armed groups operating against Syrian government forces.” Russia has been launching its own airstrikes in the area at least since June 24. The announcement puzzled analysts in Russia and elsewhere as it wasn’t clear how the statement should be interpreted. Does it represent Russia’s pullout from the earlier agreement with the United States and Jordan on the southern de-escalation zone? Is it a way to push a renegotiation of the terms in the zone? Is it a mere advantage-taking of the time lapse between the meeting with Bolton — or Putin’s encounter with Trump for that matter — to gain more ground from the opposition? Or is it part of a deal with the United States, given official Washington's reluctance to throw its weight behind the opposition groups?

While the southern de-escalation zone alone is an important issue with a genuine potential for a US-Russia deal, American military presence in the rest of Syria, especially east of the Euphrates, has been seen as more of a security challenge in the long run. Therefore, new de-confliction agreements between American and Russian militaries may also be in the cards.

In Moscow, expectations over outcomes of the summit among policymakers and the expert community are, for the most part, modest. Disagreements between the two countries have developed a systemic character, and even if Putin and Trump enjoy good personal chemistry, it is unlikely to change an overall confrontational vector of the bilateral relationship. Yet even die-hard skeptics agree that “managing the confrontation” is better than letting it develop new forms. Given the lack of specifics and ongoing negotiation process between different US-Russian agencies, it is still unclear at this point to what extent agreements between the Russian and American presidents could impact developments in the Middle East and whether the two can put an end to the region’s most violent crises as part of the "joint actions in the international arena" effort.