Dueling critics find US, Russia too cozy — or too far apart

The US and Russian presidents covered a lot of ground — including the conflict in Syria — during their unexpectedly long meeting last week, and while the countries’ future relations remain uncertain, the men agreed to disagree on some fronts. 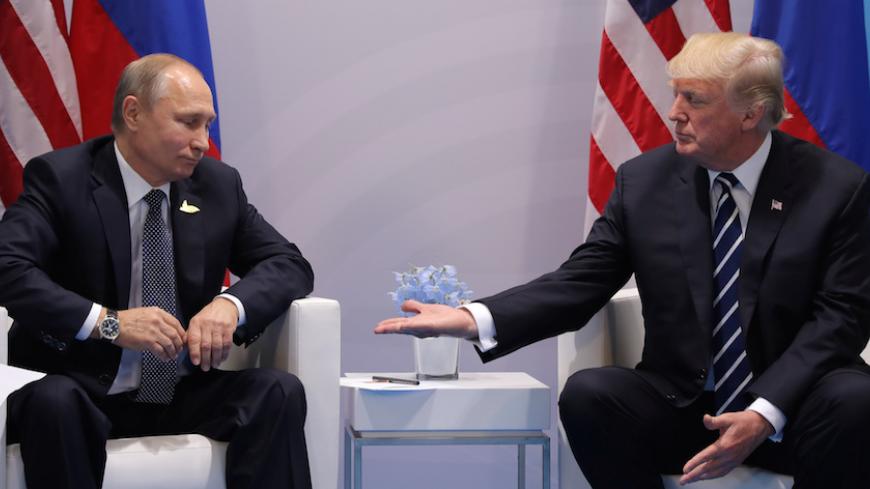 US President Donald Trump meets with Russian President Vladimir Putin during the their bilateral meeting at the Group of 20 Summit in Hamburg, Germany, July 7, 2017. - REUTERS/Carlos Barria

MOSCOW — It wouldn’t be exaggerating to contend that the first meeting between Presidents Donald Trump and Vladimir Putin was the most anticipated political encounter this year. Given the US political focus on Russia during the past eight months, and the tense character of the relationship between Moscow and Washington, some observers hoped the meeting could signal a fresh start, while others felt it would be a litmus test of whether the two states will continue on the path of confrontation.

Some Trump skeptics in Moscow have more faith in the power of the American “deep state” than the president’s ability to change the US attitude toward the Kremlin; they expect continued confrontation. Some Putin critics in Washington have an equally strong belief in his interference in the US elections and Russia’s collusion with the administration; they predict Trump will find himself submissive to or outsmarted by the “Russian czar.” So when the first reports on the results of the meeting — which lasted more than two hours instead of the scheduled 30 minutes — started to circulate, plenty of people in both capitals felt their predictions were proving accurate. The only difference is that, to prove their point, the Russian Trump skeptics must wait to see if the Putin-Trump agreements fall apart due to US government opposition, while the American critics of Putin believe they already have enough reason to fear the United States is growing too cozy with Russia.

To close observers of the meeting, which took place on the sidelines of the Group of 20 Summit held July 7-8 in Hamburg, Germany, the body language between the two leaders was significant. Both men used open gestures and courteous expressions to greet one another, trying to project an impression of being friendly and laid-back. However, the nonverbal communication also signaled that both stayed focused — a sign that the meeting they have long prepared for was a serious matter for them. Trump later called the encounter “tremendous,” while US Secretary of State Rex Tillerson said the two leaders “had positive chemistry.”

Putin, asked at the final G-20 press conference how he found Trump, was cautiously commendatory.

“Trump on television is very different from a real-life Trump. He is absolutely concrete, [understands] his interlocutor adequately, analyzes quickly” and is able to answer questions and address whatever topics arise during discussions, Putin said. “If we continue to build our relations the way we started yesterday, there’s every reason to presume we will be able to at least partially restore the level of interaction we [both] need.”

Putin’s remarks reflect Russia’s attempt to build a slightly different approach to dealing with American presidents on a personal level. For years, Moscow presumed “good personal chemistry” might spark nourishing, healthy bilateral relations. However, the Kremlin’s “buddydoms” with former US Presidents Bill Clinton, George W. Bush and Barack Obama (during his first term) didn’t serve as airbags whenever relations collided — bilaterally or internationally. With all the current allegations of collusion, “befriending Trump” wasn’t even on the table for the Kremlin. Instead, having an emphatically cordial, businesslike approach with almost zero involvement or comment on personal matters might ultimately prove more productive, according to Kremlin logic. Even if this approach ultimately fails, it’s worth trying.

Putin and Trump discussed cybersecurity, Syria, Ukraine and counterterrorism cooperation. Russian Foreign Minister Sergey Lavrov said the parties agreed to “accelerate the procedures required for the appointment of the new ambassadors — the US ambassador to Russia and the Russian ambassador to the US.” A source in the Kremlin told Al-Monitor, “Moscow’s expectation is to have both ambassadors in their respective capitals by the end of the year, though for the US, doing so might be more challenging given all the procedures they have.” In addition, newly appointed US envoy on Ukraine Kurt Volker is expected to visit Moscow soon to talk through the Minsk framework to end fighting in Ukraine.

The alleged Russian interference in US elections was probably the most controversial topic. Lavrov said July 7 that Trump “accepted Putin’s explanations” that Russia wasn’t involved. Asked to clarify how exactly Trump reacted, Putin said: “The US president did raise the issue and he did it several times. Our position is well known and I reiterated it — there are no grounds to assume Russia meddled in the US election.” When pressed, he added: “I sensed he took it into consideration and agreed. But you’d better ask him how he felt about it.”

Putin mentioned that the most important part of this conversation was, “We agreed that such uncertain situations should not be happening in this sphere in the future. We agreed to create a working group [on cybersecurity and to] work together on how to prevent interference into domestic affairs of third states — we are talking about Russia and the US. If we are able to work it all out properly, there won’t be any more speculation on this issue.”

Putin appeared satisfied with the establishment of a new de-escalation zone in southwest Syria and the Syrian track in general.

“Regardless of how anyone is reacting to this, I should say it’s one of the breakthroughs that we managed to achieve in the course of our work with President Trump. It’s a real result of our joint work with the US, Jordan and some other countries of the region that joined in. We’ve held consultations with Israel and will continue to do so,” Putin said.

Work will continue on other de-escalation zones, though others will be involved, he said.

“We talked about this in detail with Turkey’s president [Recep Tayyip Erdogan] — there are many things that don’t depend on us and are between the regional states. Everyone has their own concerns, their own preferences, their legitimate interests — and we need to treat them as such — but we need to be looking for compromises. Sometimes we are able to find them: At least active hostilities are ceased. De-escalation zones are a huge step forward. Now we need to agree on their concrete borders, how security there is going to be provided. It’s very painstaking, even tedious, but extremely important and responsible work.”

He added, “With the goodwill of Iran, Turkey and of course the Syrian government, we could take further steps.”

The cease-fire also negotiated for the territory began July 9 at noon Damascus time. The United States virtually agreed that Russian military police forces will be ensuring the cease-fire in the area, which is important to Moscow in that it recognizes Russia as part of the solution and implies some division of labor between the two. Lavrov mentioned that the agreement also includes “securing humanitarian access” for Russia and the United States to the area and “setting up contacts between the opposition in the region and a monitoring center that is being established in Jordan's capital [Amman]."

One of Putin’s remarks that seemed to slip the attention of reporters but may be critical regarding Russia’s vision of Syria’s future was about the very idea of the de-escalation zones: “Our ultimate goal with the de-escalation zones is to ensure the territorial integrity of Syria,” Putin said. “So the zones are a prototype of future territories in Syria that could be cooperating both among themselves and Damascus. If we are able to do it, we could have some good basis, some prerequisites, for solving the Syrian crisis by political means.”

That viewpoint may suggest that Moscow is currently prioritizing federalization as the best of all possible alternatives for Syria to exist in its current borders. Syrian President Bashar al-Assad, however, has rejected the idea.

Commenting on Tillerson's statement that the United States still sees "no long-term role for the Assad family or the Assad regime,” Putin said: “Mr. Tillerson is a well-regarded person, you know, he holds a Russian Order of Friendship, we respect and love him — but he is not a Syrian citizen. Both the future of Syria and Assad should be determined by Syrian people.”

Addressing another facet of the Syrian conundrum — an anticipated Turkish offensive on Syria’s Kurdish areas — Putin said, “The Kurdish issue is indeed a big and a multifaceted one. It’s no secret that we are in contact with many Kurdish groupings.”

The many military peacekeepers in Syria, he said, haven’t seen any Turkish preparations for new combat operations. “On the contrary, we hope our preliminary work on de-escalation zones, be they in Idlib or in the north, [will succeed] and it’s impossible to do without support from Turkey.”

Trump and Putin's agreements are a sign that the leaders’ respective teams have been working closely on Syria issues. The decision on the de-escalation zone illustrates this — such decisions take a lot of time and effort to work out, especially as there are bound to be disagreements. Even more remarkable has been the ability to keep the ongoing work relatively confidential among the parties, given the plentiful and frequent leaks these days. What’s critical now is that Russia and the United States remain realistic about the challenges ahead and maintain the political will to continue on the path regardless of potential problems. Expectations in the Kremlin are fundamentally the same as they are in the White House: Both parties should now be able to deliver on their agreements.