Russia, US to maintain contacts on Syria despite sanctions

US and Russian officials will try to maintain contacts concerning world hotspots within the limits imposed by US sanctions on the Kremlin. 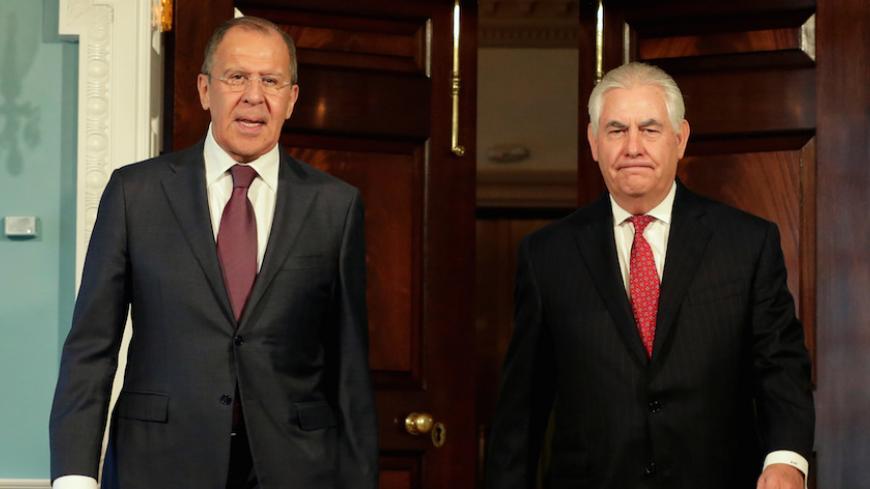 US Secretary of State Rex Tillerson (R) walks with Russian Foreign Minister Sergey Lavrov before their meeting at the State Department in Washington, US, May 10, 2017. - REUTERS/Yuri Gripas

MOSCOW — In recent weeks, ever since the US House of Representatives first passed new sanctions on Russia — which were later passed by the Senate and ultimately signed by President Donald Trump (though seemingly reluctantly) — Moscow has been agitated. Russian Foreign Minister Sergey Lavrov and his US counterpart Rex Tillerson had two phone conversations over seven days — one following Russia’s decision to expel American diplomats and suspend the use of two US Embassy properties in Moscow, the other two days before the pair met face to face on the sidelines of the ASEAN ministerial meeting in Manila, Philippines. In the latter, the North Korea issue dominated the conversation as the two parties shifted focus from bilateral problems to burning international challenges.

Lavrov and Tillerson’s Aug. 6 meeting  in Manila, which lasted about an hour, kicked off, according to Lavrov, with Tillerson's “being interested in details of the decision [on the expulsion of American diplomats] that we took in retaliation to the anti-Russian sanctions law. … We waited for a long time, expecting that the US would not take the confrontational course. But unfortunately the Russophobic bias of members of Congress prevailed.” Remarkably, Lavrov reiterated Russia’s commitment, despite the sanctions, to the Putin-Trump Hamburg agreements “to get the cooperation started on cybersecurity and a joint effort against cybercrimes and the prevention of them.” Russia’s Foreign Ministry also hopes for contacts with the State Department on the North Korea problem, saying such communications “would be useful.” Moscow is also expecting Kurt Volker, the US envoy on Ukraine, to meet with his Russian counterpart Vladislav Surkov “very soon.” Similarly, Russian diplomacy has seemingly special hopes for the Ryabkov-Shannon mechanism as a main (crisis) communication channel for bilateral relations, where US Undersecretary Thomas Shannon has contact with Russian counterpart Sergei Ryabkov.

A big part of the Tillerson-Lavrov conversation was devoted to three issues affecting Middle East security: the situation in Afghanistan, the intra-Gulf spat and the state of affairs in Syria. Lavrov emphasized that “the contacts between Russians and Americans will continue to build on the agreements reached between Russia, the US and Jordan on the creation of the southern de-escalation zone in Syria. We expect our contacts with the US to continue on other aspects of the Syrian settlement — both military and political ones. Essentially these contacts have never ceased.”

The issue of the de-escalation zones was also discussed by Lavrov in his ASEAN meeting with Turkish Foreign Minister Mevlut Cavusoglu. The two exchanged views on the progress on implementation of the Astana agreements and the upcoming meeting of Russian, Turkish and Iranian representatives in Tehran scheduled for Aug. 8-9. The agenda of the meeting is believed to be focused on “consolidation of the de-escalation zones in Syria.” Now that the three such zones are in place in the southwest of Syria, in Eastern Ghouta and in northern Homs, “the parties are working on the fourth one in Idlib, which is the biggest and most complex,” Lavrov said.

Asked if Moscow was disturbed that the militants who refused to sign the cease-fire had left for Idlib, Lavrov said of the fourth de-escalation zone: “This is indeed the most difficult zone to establish of all those agreed upon by Russia, Turkey and Iran. We are coming to the belief that the 'troika,' as well as other players, including possibly the US, have influence in the aggregate over all militant and armed groupings, excluding terrorists who will never be a part of such agreements. If Russia, Turkey and Iran as well as the US-led coalition simultaneously use their influence over concrete actors that are fighting each other on the ground, then some compromise-based proposals can be found that would aid cease-fires and create conditions for the political process.”

A key takeaway for Moscow from these meetings — and especially the one with Tillerson — was what Lavrov called “readiness of our American colleagues to continue with the dialogue. There is simply no alternative to it.” After the two weeks of heated rhetoric and public demarches it was important for Russians as well as probably Americans to see how far the other party is going to go in its “countermeasures” mode. What the Russians left with was that the existing contacts, specifically those on Syria, will likely continue.

The modus operandi — where Russia and the United States intentionally leave outside the equation the systemic disagreements that both know are not going to be reconciled anytime soon while continuing with the exasperating “infowar spats” but also with mutually beneficial contacts on Syria — may eventually bear more fruit. It should at least provide a greater return than aspirations for a “grand fix” of the relationship, let alone a “big deal” between Moscow and Washington. In Russia, virtually all the policymaking community has come to realize that such a deal is simply not possible, both because of the “spiraling frenzy in Washington” — as one Kremlin adviser put it — and because of “the elite mood” vis-a-vis Russia — both among Democrats and Republicans.

The fact that there are no more expectations in Moscow for Trump to deliver something big — if there ever were such expectations in the Kremlin — may ironically open more space for a targeted cooperation on a handful of international security issues that concern both Russia and America. For Russians, it would be an embodiment of the cooperation with the United States they have been seeking. For the Trump administration, it may be an opportunity to turn the US relationship with Russia into a form of a more targeted, two-man-channel format working on specific issues (such as the Ryabkov-Shannon mechanism or the Volker-Surkov contact group) or more confidential work such as what Russians and Americans are doing in Amman, Jordan. With all the Russia scandal in Washington, none of these formats have been suspected of being part of any “collusion” — at least until now — which is healthy for the sake of the successful settlement of the conflicts these formats are designed to help deliver.

But as Al-Monitor colleague Laura Rozen writes, the new sanctions tie the administration's hands on cooperation with Russia. This is something people in Moscow should be — and are — aware of. This also means that any contact or an attempt to have a joint initiative with Russians will be under the watchful eye of those distrusting Trump, with potential press leaks also being an issue. Yet should the two countries break the deadlock in regional conflicts amid bilateral strain, with virtually all previous options having fallen flat, this approach would be seen as a valid one for the Kremlin and the White House to have pursued. Both must take into account, however, that when it comes to assessing prospects for progress in this approach under the current circumstances, being a pessimist is a better than being an optimist.