Logistic challenges apparently detoured a definitive Washington-Moscow statement on Syria, but haven't derailed it — so far. 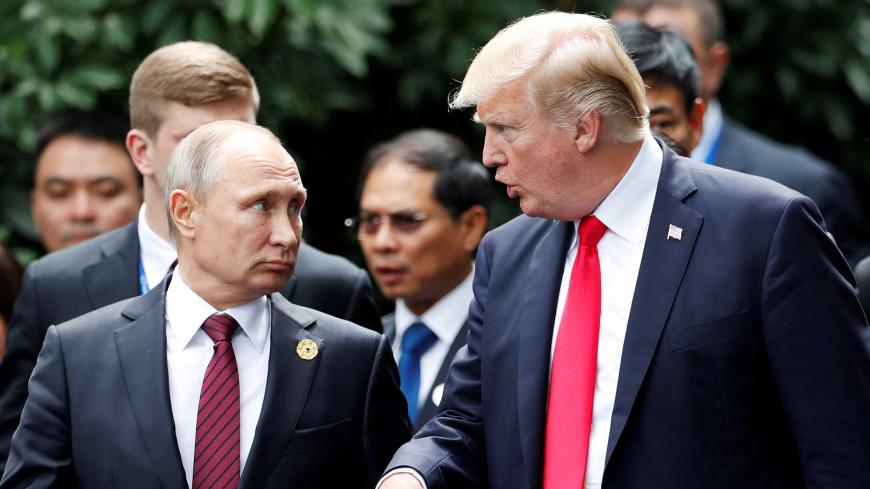 The story of last week's encounter between Russian President Vladimir Putin and US President Donald Trump reflects on a smaller scale their closely scrutinized bilateral relationship and the caution they feel they must exert when approaching one another.

Shortly before their brief dialogue at the Asia-Pacific Economic Cooperation Summit in Vietnam, Al-Monitor reported that the flurry of activity between the two countries at different levels indicated they were working on some joint decisions to be announced afterward. Hours before the two presidents were supposed to sit down for a conversation, both Sputnik and The Associated Press reported a potential bilateral agreement was being brewed that would mention such issues as continued deconfliction between the US and Russian forces operating in Syria, and reviving peace talks in Geneva.

Yet the meeting, which had been under preparation for a few weeks, if not months — and that Moscow clearly wanted — didn’t take place. Trump was the only leader to skip the two plenary sessions on the first official day of the summit, raising speculation among the Russians about whether he was intentionally dodging Putin. Russian officials have been bewildered by this attitude, with Kremlin spokesman Dmitry Peskov saying, “There was no clarity over whether the meeting was going to take place, but given the two presidents are in town, they’ll meet one way or another.” Visibly irritated, Foreign Minister Sergey Lavrov told a clingy Russian reporter “to go ask Americans about the [Putin-Trump] meeting." Peskov added, "We heard Trump's intent for the meeting, but I don’t know what his pencil pushers ultimately told him."

Later, a well-connected Kommersant reporter, Andrey Kolesnikov from Putin’s press pool, referenced a source in the Russian delegation who argued the main reason the meeting didn’t take place — even though it seemed to have been agreed upon — was the Americans' sudden decision to change the location.

“We had an agreement that President Trump would come over to Putin’s [quarters in Danang], since at their last meeting at [the G-20 in Hamburg], Putin came over to Trump’s place,” Kolesnikov said, citing the source. But, according to the official, the Americans demanded at the last minute that Putin come to Trump's quarters at a time that was inconvenient for the Russian president. The Russians, according to the Kolesnikov source, attempted to reschedule the meeting for after the dinner so that it could go into the night if necessary, but the Americans allegedly insisted the only possible option for them was the time and place they indicated. The Russians eventually thought it was too impudent on the US side and didn’t respond, Kolesnikov said.

What was immediately seen in Russia as a “scandal” and dubbed by the Russian liberal opposition as a “slap in Putin’s face” was interpreted by pro-Kremlin commentators as a sign of Trump’s own weakness to make independent decisions — weakness in the face of “Russia opponents” in his own camp. A quick chat and a brief handshake at the first-day photo shoot didn’t count, as it couldn’t produce anything substantial.

So when, on the second day of the summit, Putin and Trump finally had a longer conversation while on their way to a final group photo shoot, it was a relief for all those in Moscow who feared the aborted meeting would have lingering political implications. Putin later downplayed the incident, saying the full-fledged meeting didn’t happen because of “the schedule differences” and “formalities of the protocol that our teams failed to manage.” He quipped, “They will be punished for this."

What came out of the chat on the move made bigger news. Putin and Trump approved a joint statement on Syria. A Kremlin press release makes it clear the document “had been drafted by the two countries’ experts and coordinated by” Lavrov and US Secretary of State Rex Tillerson, and had been “specially prepared for the Danang meeting.” In other words, the Russians hoped the document would have a much bigger public and political effect, but the way the encounter happened degraded it somewhat.

Substantially, though, the statement reaffirms each party’s commitment to fight the Islamic State (IS) “until its total defeat,” maintain communication channels to provide security for the Russian and American military in Syria. and “prevent dangerous incidents between the forces fighting [IS].” The two presidents expressed satisfaction with how the deconfliction has worked so far and agreed it helped significantly to raise the IS death toll in recent months.

Commenting on the statement, Peskov told RIA Novosti that both Putin and Trump “agreed that the conflict in Syria has no military solution” and “reiterated their commitment to Syria’s sovereignty, independence, unity, territorial integrity and secularism in accordance with UNSC Resolution 2254.”

“[Putin and Trump] reiterated the significance of the de-escalation zones as a temporary measure to decrease violence in Syria, deliver on cease-fire commitments, improve unhindered humanitarian access and create conditions for an ultimate political settlement of the conflict,” Peskov added.

According to the document, the Amman Monitoring Center in Jordan, where Russian and American experts work together, will continue to monitor the cease-fire agreements in Syria.

It’s critical that Moscow and Washington also agreed that the “final solution to the political settlement in Syria should be found within the Geneva process and in accordance with UNSC Resolution 2254.” Besides, the parties are sending messages to both the opposition and the government of Syrian President Bashar al-Assad. The opposition is being urged to actively participate "in the Geneva political process and support the efforts aimed at ensuring its success.” Assad's government is encouraged to fully comply with the resolution, "including constitutional reform and free and fair elections under the auspices of the UN and with the observance of the highest international standards, transparency and accountability and with all Syrians, including members of diasporas, having rights to participate [in the elections].”

This will now be an important reference point for Moscow and Washington both in their bilateral contacts and in their communication with the respective warring parties. The opposition and the Assad regime are likely to disobey these principles, but they will serve as important guidelines. Most importantly, the statement is aimed at shifting the paradigm of “Moscow and Assad” versus “Washington and the opposition” to Moscow and Washington pressing for Assad and the opposition to work with one another. This is unlikely to work immediately, if ever, and is not going to change the public perception of who supports whom in the Syrian civil war. But it signals a principal intent in Moscow and Washington to leave their own conflicts of interest outside this specific equation and find a key to the six-year Syrian deadlock by working together on the local players.

It’s hard to argue that Russia and the United States have found the long-pursued path to success, given that local players — Iran and Turkey in particular — have disengaged from the process. Other challenges include fundamental foreign-policy differences between Russia and the United States, their record of “Syria deals” and Washington's huge distrust of Putin. The joint statement, however, comes as a result of many months of consultations and coordination at the level of senior security personnel who are likely to have taken all of the above-mentioned factors into account. Thus, it’s now the objective of Moscow and Washington to work these principles, each with their own domestic constituencies, regional partners and other critical stakeholders in the process and to ensure — to the best of their capability — that they don’t derail it yet again.