What is the agenda for the upcoming meeting between US President Donald Trump and Russian President Vladimir Putin? Trump wants to talk North Korea, but Moscow is seeking a broader, more in-depth conversation on the Middle East. 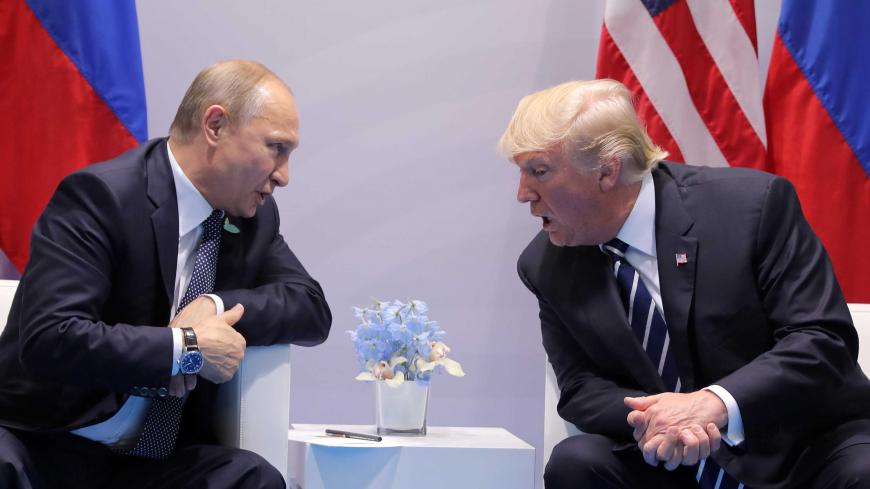 US President Donald Trump speaks with Russian President Vladimir Putin during the their bilateral meeting at the G-20 summit in Hamburg, Germany, July 7, 2017. - REUTERS/Carlos Barria

MOSCOW — Russian President Vladimir Putin and US President Donald Trump may bring different expectations to the table if they meet face to face, as expected, this week at the Asia-Pacific Economic Cooperation forum in Vietnam. Their last meeting took place in July at the Group of 20 summit in Hamburg, Germany, and produced the announcement of a de-escalation zone in Syria at the border with Israel.

Until recently, the Kremlin and the White House have been reluctant to comment with certainty on whether the two presidents will make a thorough review of some of the issues equally challenging to Russia and the United States, but the latest messages from Moscow suggest this is what the Russians are looking for. Kremlin spokesperson Dmitry Peskov said Nov. 4 that the men are considering a discussion of the Syrian settlement. Peskov also dropped an important clue on Moscow’s thinking behind elaborating on an agenda for the Putin-Trump talks, saying it is “in the common interest [that] both presidents could find opportunities for a rather long communication."

Earlier, speaking at the Conference of the Russian-American Science Association in Chicago, Russian Ambassador to the United States Anatoly Antonov said the agenda for the meeting between the presidents is likely to focus on three major topics: the "war on international terrorism, prospects for the peace settlement in Syria and the North Korea nuclear problem.”

Indeed, Moscow is signaling it would still like to emphasize the issues it has long been promoting with the United States. The terror attack in New York last week by Uzbek national Sayfullo Saipov was seen in Moscow as yet another sign for Russia and the United States to start cooperating on the terrorism threat. Saipov’s radicalization seems to have occurred in the United States rather than in his native Uzbekistan; thus, Trump’s immediate response on tightening the immigration screws isn’t necessarily going to help shield America from this peril.

The problem of a rising number of extremists coming from Central Asia, however, has been something Moscow has drawn international attention to and struggled with in the past couple of years. The deadly metro bombing April 3 in Russia that killed a dozen and wounded more than 50 in St. Petersburg was carried out by Akbarzhon Jalilov, a Kyrgyzstan-born Russian citizen of Uzbek descent. Recruiting strategies of the Islamic State (IS) and other extremist groups in Central Asia are well known, and the number of those joining the ranks of terrorists in Syria and Iraq raises serious concerns among regional governments.

Yet Moscow recognizes America’s lack of enthusiasm for discussing these issues with Russia. A senior Russian diplomat told Al-Monitor, not for attribution, “It would be nice if Trump agreed to give a positive impetus to such [anti-terrorism] cooperation, but it’s highly unlikely, given the current attitudes toward Russia in Washington.” There are deep-seated beliefs in Moscow that the United States isn't serious about cooperating on this issue. In fact, Russian decision-makers frequently refer to Putin’s own suggestion that Washington fostered extremist separatist forces in the North Caucasus in the 1990s.

“There were a few times where we thought Americans would echo our proposals on counterterrorist cooperation, like right after the 9/11 tragedy in 2001 or after the Boston Marathon bombing in April 2013,” said the Russian diplomat, who works on issues related to counterterrorism. “Different issues have been discussed at multiple levels in Russia and the United States. But besides occasional breakthroughs, such as the US designation of the Caucasus Emirate as a terrorist organization, cooperation on this issue has been rather unsuccessful. The ongoing confrontation [between Russia and the United States] makes any constructive joint dealings on the threat even more difficult, if at all possible,” he said.

Nevertheless, given the scale of the terrorist threat, as well as the associated radicalization problems Russia and the United States may soon be facing in Afghanistan, Moscow believes raising these issues at the top level with the new administration is worth a try.

The Trump administration, however, seems of the opinion that the Asia-Pacific Economic Cooperation forum in Vietnam is a more appropriate venue for discussing what it sees as a more imminent threat: North Korea’s nuclear program. On his way to Tokyo, Trump implied Washington would seek to enlist Moscow on dealing with Pyongyang. "We want Putin's help on North Korea, and we'll be meeting with a lot of different leaders," Trump said.

Yet not everyone in Moscow is happy with such an approach. Alexander Domrin, a professor at the Moscow-based Higher School of Economics, said, “Russia is likely to resist any attempts from Trump to impose America’s position over any international issue equally important to both countries.”

Domrin added, “When Americans are saying, 'We need your help,' it’s not going to work this way. They have their own position and we have our own stance on certain issues like North Korea and Ukraine. When they have a plan and we have a plan [on how to address these issues] we can work to bridge these two visions." But the United States can't view Russia as “owing assistance."

Syria is likely to be one area where Putin and Trump may be trying to reconcile two different visions. On Nov. 2, US Secretary of State Rex Tillerson called Russian Foreign Minister Sergey Lavrov to discuss a number of Syria-related topics on which Moscow and Washington have been moving further apart. The UN Joint Investigative Mechanism, which is scrutinizing the chemical attacks in Syria, has recently been a bone of contention between Russia and the United States, with each submitting what the Russian government news agency Tass described as “mutually exclusive” resolutions to the UN Security Council.

Yet there are signs Russia and the United States are seeking a political settlement in Syria. So far, both seem to agree on the two principles that should be underpinning the process: Syria's territorial integrity and an all-inclusive, nationwide dialogue under UN Security Council Resolution 2254. The devil, however, is in the details. Agreement on a role for Iran in the future Syria is barely possible, as is a consensus among a broader set of regional actors regarding who should be included in the “national dialogue.” Russia’s own initiative, the Syria Peace Congress in Sochi, seems to have suffered a pushback from Turkey, which doesn't want the Kurdish nationalist Democratic Union Party to participate. Moscow, however, continues to court each and every actor in the process and said the congress will still be held.

Some policymakers in Moscow thought it was no coincidence that, days before the anticipated Putin-Trump encounter, the US Justice Department issued indictments in its investigation of possible ties between Russia and members of Trump's campaign/administration. In private conversations, these policymakers share views that it’s all part of a continuing “establishment plot” in Washington to hinder Trump’s cooperation with Russia on security issues. Others raise concerns that Trump’s own threats following the terrorist attack in New York — threats that IS will pay “a big price for every attack on us” — might serve as a pretext to begin a new American surge in Syria and Iraq, all to dismantle Russian and Iranian plans.

Even if these theories are mere speculations, Moscow and Washington have accumulated piles of disagreements that need to be discussed at the top level. Tacit preparations — at least on the Russian side — for the two leaders’ meeting suggest Russia is aiming for something in-depth and substantial.